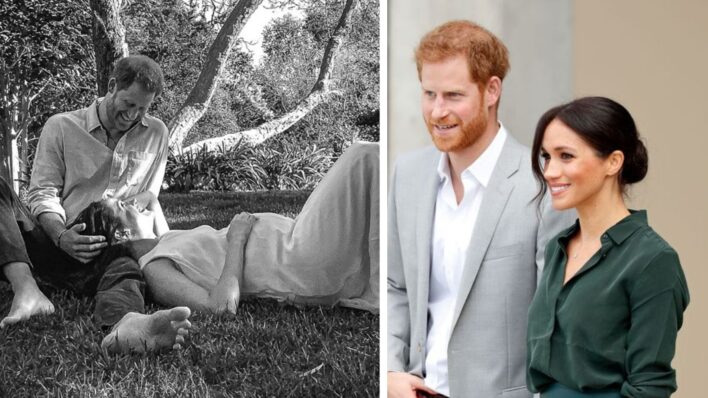 Prince Harry and Meghan, Duchess of Sussex, have seen endless conflict and tragedy over the last few years – Meghan
By Aly Walansky    February 17, 2021

Prince Harry and Meghan, Duchess of Sussex, have seen endless conflict and tragedy over the last few years – Meghan left her home, career and family to go to England and marry a prince.

Just a few short years later, she and Prince Harry had to flee the UK and head to America – away from prying media and his overbearing family’s often-archaic rules.

Upon moving to California, Meghan and Harry settled into a new home during an ongoing pandemic and soon after suffered a devastating miscarriage. This loss was made even more terrible by the isolating factors of lockdown – and the never-waning pressure of living in the public eye.

But now, there’s good news for the royal couple: a new baby on the way!

The Duke and Duchess of Sussex announced their news with a sweet photo of Prince Harry resting his hand on Meghan’s head as she lies in his lap cradling her bump, somewhere out in nature in their new home of Los Angeles.

“We can confirm that Archie is going to be a big brother.

– Spokesperson for the Royal couple

“The Duke and Duchess of Sussex are overjoyed to be expecting their second child.”

This is much-deserved good news comes after the duchess suffered a miscarriage last summer, and in a week fraught with news – she just won a privacy case against Associated Newspapers Limited.

Meghan shared news of her miscarriage in November of 2020 in an article for the New York Times, writing: “I knew, as I clutched my firstborn child, that I was losing my second.”

Meghan and Harry have gone through a lot in recent years, from quitting their roles as senior royals to moving to California, where they hoped to achieve financial freedom – and also freedom from the British press, which was often invasive and attacking in their coverage.

But this new baby comes at a time when they seem happy and secure on their own terms for the first time in years. Their new baby can be born in privacy, without the scrutiny of the public – something every family deserves, especially after so much conflict and loss.

Children born after a loss are often known as rainbow babies – and it looks like this couple has quite the rainbow in their future.