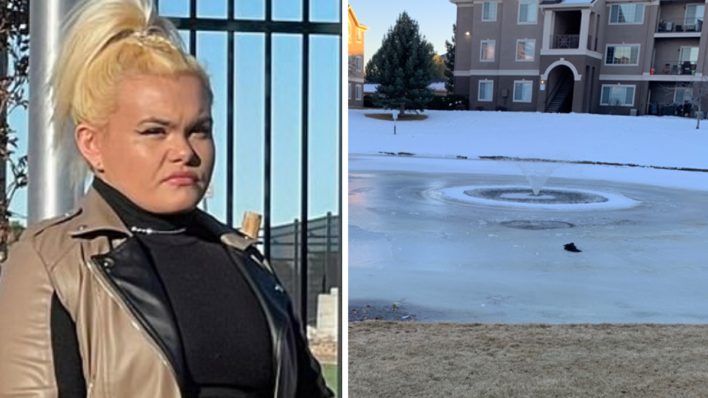 In a wild turn of events, one brave woman put herself in the eye of danger to rescue three children.
By Bryan Liquor    February 12, 2022

In a wild turn of events, one brave woman put herself in the eye of danger to rescue three children.

23-year-old Dusti Talavera was in her Colorado apartment, watching three children playing on a frozen pond from her window. She turned around for a moment and when she looked back, they were gone.

Right before her eyes, the ice gave away, sending the three kids- two girls, aged 4 and 6 and an 11-year-old boy- plunging into the frigid water.

According to the Denver Gazette, Talavera said that in that particular moment, her instincts went on autopilot.

I just kind of put some shoes on and ran outside because nobody was really outside. It was me, I just knew it was me that had to do it.

The next thing she knew, Talavera was in the middle of the pond in rescue mode. She was able to pull the boy and younger girl from the pond.

However, Talavera would soon be the one in danger.

While attempting to rescue the third child, she too fell through the ice, finding herself in the 15-foot-deep pond.

Yet, even as she fought for her own life, Talavera tried to keep the girl’s head, who was unconscious, above water.

Thankfully, the girls’ 16-year-old cousin rushed over and threw Talavera a rope. Once she got out, she managed to pull out the girl until help arrived.

After performing CPR on the girl, she was rushed to Children’s Hospital in critical condition, but she along with the two other children survived the incident.

Talavera’s heroics quickly got national attention as word of her bravery went viral.

“Girl thank you for your quick and heroic reaction! You are amazing

thank you to the rescue teams y’all are amazing,” posted one.

“What an amazing woman to do what she did….with no concern for her own safety! Thank you for your service to everyone that helped out.

What she did was amazing, we were back at the fire station talking about how brave she was and, gosh, if this happened to one of mine I’d hope somebody like her was close by.

Looking back on that Sunday, Talavera said that there was no time to think of herself; all she thought about were those kids.

My instinct was to go outside and help them. It was just…save the kids. They’re just children. I was just worried about them. I didn’t think about (myself).

Of course, there’s also a cautionary tale here to parents about letting your kids play unattended, let alone on an icy pond. As we saw, things can go from zero to crisis in mere seconds.

However, when things go awry, we’re lucky to have heroes like Talavera who act in the face of danger to keep our kids safe.

not all heroes wear capes
“A hero is an ordinary individual who finds the strength to persevere and endure in spite of overwhelming obstacles.” – Christopher Reeve