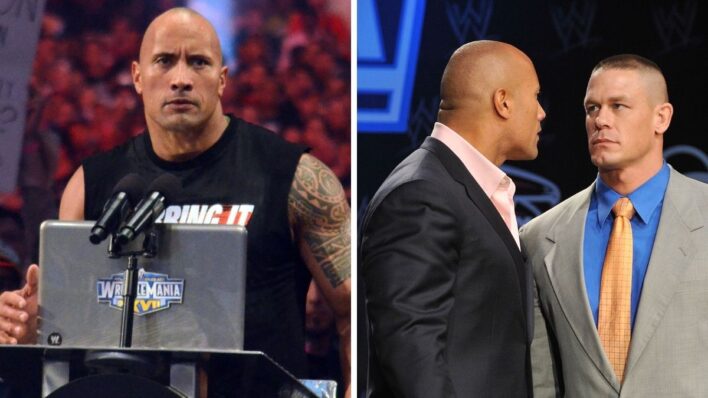 The Empowering Truth Behind John Cena and Dwayne Johnson’s Feud

Dwayne ‘The Rock’ Johnson and John Cena’s feud started in the rink but ended up spilling out to the real world. Here’s how it got resolved.
By Shaoni Das    July 2, 2021

Dwayne ‘The Rock’ Johnson and John Cena’s feud started in the rink but ended up spilling out to the real world. Here’s how it got resolved.

What is it about professional wrestling that propels its most prominent players towards movie stardom?

It may seem fairly unexceptional at the moment, but it wasn’t too long ago that a jump from a rough-and-tumble fighting gig to a feted career in Hollywood made you a laughing stock in both arenas. Some notable examples of this occurrence include Dwayne ‘The Rock’ Johnson and John Cena, both of whom essentially invented the blueprint for this type of professional trajectory.

Hardcore wrestling aficionados are no stranger to the two’s long-standing rivalry, which has continued in some form or the other for nearly twenty years. The feud, of course, erupted in the ring, where they spent years ostensibly trash-talking each other to drum up excitement and publicity for their showdowns. However, even as Dwayne and John Cena went on to gain respectable footing in the entertainment industry, the feud didn’t appear to subside, and perhaps may have even worsened.

Dwayne had been the first among the two to end his contract with WWE to pursue full-time acting. As such, John Cena took full advantage of his rival’s departure to make jabs about his emerging film career. This particularly rings hypocritical to our modern sensibilities as we now know John Cena shortly followed in The Rock’s footsteps to carve out his own place within Hollywood. However, back in the early 2010s, John had no idea that he would go on to emulate his greatest adversary.

John went on a radio interview in 2010 and condemned Dwayne’s decision to abandon wrestling, given how he claimed to love the sport so much. “Explain to me why he can’t come back for an anniversary show, why he can’t make an appearance at WrestleMania. Simply put, it’s because he wants to be an actor,” he said. The proud Massachusettsian accused The Rock of actively prioritizing his movie aspirations over the bustling wrestling scene. They were insinuations that The Rock was slighting his legion of old-school fans by opting for the glamorous riches of Tinsel Town. “Don’t f*** me around and tell me that you love [wrestling] when you’re just doing it to do something else,” said John Cena.

Eventually, The Rock returned to the ring as the host of WrestleMania XXVII to face Cena.  As one can imagine, John didn’t miss a beat in viciously tearing at his nemesis. “Fashion advice from the Tooth Fairy,” he yelled out during the prolific clash, referring to Dwayne’s 2010 film. In another WrestleMania face-off, John said The Rock’s best stuff is “either pre-recorded or via satellite,” adding that he’s a “vodka-mixer and a Corvette away from a mid-life crisis.”

John clearly didn’t hold back. Reflecting on the heated confrontation, John expressed regret at launching such a harsh, pointed attack on The Rock’s flourishing film career. “It was stupid of me. It genuinely was,” he admitted, adding that his brazenness had been a result of his limited perspective. He’d been oblivious to The Rock’s laborious journey in film, so he pounced on low-hanging fruit and decided to blast the WWE superstar.

For me to not be able to see Dwayne’s vision on what he wanted to do personally, and how his personal success could affect a growing global brand, that was just ignorant on my part.

He acknowledged that he had had “blinders” on when he lambasted The Rock for not showing up at high-profile WWE events, as if the Jumanji actor was committing an eternal sin by keeping a low profile and fine-tuning his craft. John simply had been so immersed in the idea of the dedicated fighter, someone who lives and breathes wrestling at every instance, that the possibility of a wrestling champion forgoing his so-called duties seemed nothing short of a betrayal.

However, as a fledgling actor himself, John Cena understands the struggle to break away from your principal identity and establish a name for yourself in an entirely dissimilar environment. That’s why he’s changed his stance on Dwayne’s commitment to acting; instead, he has nothing but the utmost respect and admiration for Dwayne. In a way, Dwayne laid the foundation for how pro-wrestlers can shine in other spheres, and so John Cena will remain forever indebted to The Rock for the way he blazed a trail for wrestlers in cinema.

Cena said that he wouldn’t have half the opportunities he does today had it not been for Rock’s contribution to cinema. He’s “thankful” to Dwayne, and he is incredibly appreciative of Dwayne’s determination in breaking stereotypes and showing the world that pro-wrestlers can be more than pro-wrestlers, that they have the capacity to create intuitive art that can stir emotions as effectively as the explosive battles in the ring.

I’m very thankful to Dwayne Johnson. His success has gotten me a lot of opportunities that I’m extremely thankful for, and certainly wouldn’t have without him […] I think his biggest accomplishment is to be one of the bricks that break the wall of the stereotype that we have.

The most ironic detail about the wrestling-to-acting transition is that both fields are strikingly similar to one another. The element of theatricality is endemic to WWE, and the level of showmanship is second to none. So it’s no surprise that these retired wrestlers seem to excel in the movie business; they know what it takes to adhere to a script and tap into their innermost emotions to elicit drama.

Yet, John Cena should still be commended for putting aside the competitive impulses and showering his contemporary with such high praise. There’s a tremendous amount of self-aggrandizing and animosity associated with WWE, and as planned and ‘artificial’ as the exchanges seem, it’s still quite out of the ordinary to see the fighters get along. It’s not from one side, either; Dwayne has gone on record to share that he considers John Cena one of his “best friends,” adding that they talk all the time and that he’s always rooting for him to win, either it’s in the ring or on the screen.

Judgment only limits our potential

It took John Cena an awfully long period of time to realize that he’d been restricting his own potential by vehemently judging The Rock’s motivations. Yes, you could argue that most of their ringside tirades were motivated by WWE publicity tactics, but there is no doubt that John Cena held unfair assumptions about The Rock and his decision to venture into film.

Instead of spending our energies on judging and shaming others for how they choose to pursue their life, we should remain open-minded and presume everyone has their own reasons for doing what they do. It doesn’t necessarily mean that you need to mimic their actions, but as long as you harbor a reasonable level of curiosity, you’ll be able to unlock your full potential and discover truths about your talent and work ethic.