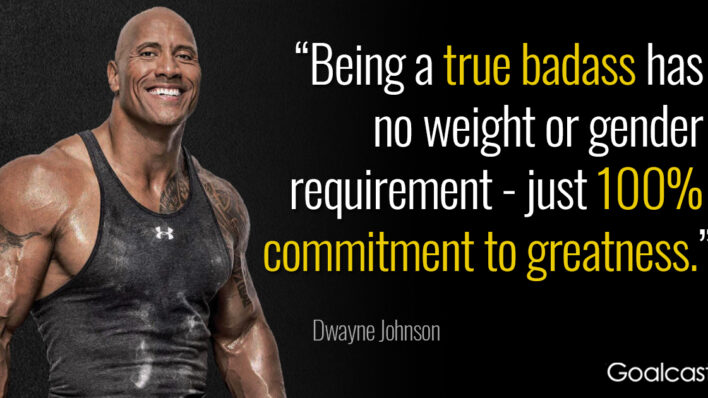 Rising to fame as a wrestler, Dwayne “The Rock” Johnson continues to climb the ladder of success. He is now
By Flavia Medrut    April 18, 2018

Rising to fame as a wrestler, Dwayne “The Rock” Johnson continues to climb the ladder of success. He is now one of Hollywood’s most beloved figures (and one of the highest-paid ones too). The Rock’s life hasn’t always been as easy and glamorous as it might look now. Money always seemed to be an issue for the Johnsons. Dwayne’s father was a professional wrestler, but that didn’t bring enough money, so the problems escalated to the point where the family was evicted. The Rock’s mother tried to commit suicide. On top of that, his professional football aspirations ended after only two months.

Driven by the dream of never having to face financial issues again, The Rock started working on the other sport he already knew – wrestling. He trained hard, overcame depression struggles, and faced the fact the crowd booed him during every match. He continued until his name became famous in the wrestling world and the crowd fell in love with him.

After achieving everything he wanted in wrestling, The Rock started a career in the film industry as an action and comedy star. Last year, he finally received his own star on the Hollywood Walk of Fame. Now, he might plan to run for President… This guy is just unstoppable!

Here are 20 The Rock quotes to motivate and bring out the best in you. Being a true badass has no weight or gender requirement — just 100% commitment to greatness.

Be the type of person that when your feet touch the floor in the morning the devil says, ‘Aww shit, they’re up!’

With drive and a bit of talent you can move mountains.

You don’t need directions, just point yourself to the top and go!

You know why rabbit rhymes with habit? Because it takes your whole life down a f*cking bunny hole.

Don’t be afraid to be ambitious about your goals. Hard work never stops. Neither should your dreams.

All success begins with self-discipline. It starts with you.

Blood, sweat and respect. First two you give, last one you earn. Success at anything will always come down to this: focus and effort, and we control both.

If something stands between you and your success, move it! Never be denied.

I like to use the hard times in the past to motivate me today. Success isn’t overnight. It’s when everyday you get a little better than the day before. It all adds up.

When you walk up to opportunities door, don’t knock it… kick that b*tch in, smile and introduce yourself.

Not only do I think being nice and kind is easy, but being kind, in my opinion, is important.

The wall… Your success is on the other side. Can’t jump over it or go around it. You know what to do.

Attitude and enthusiasm play a big part in my life. I get excited about the things that inspire me. I also believe in laughing and having a good time.

Check your ego at the door. The ego can be the great success inhibitor. It can kill opportunities, and it can kill success.