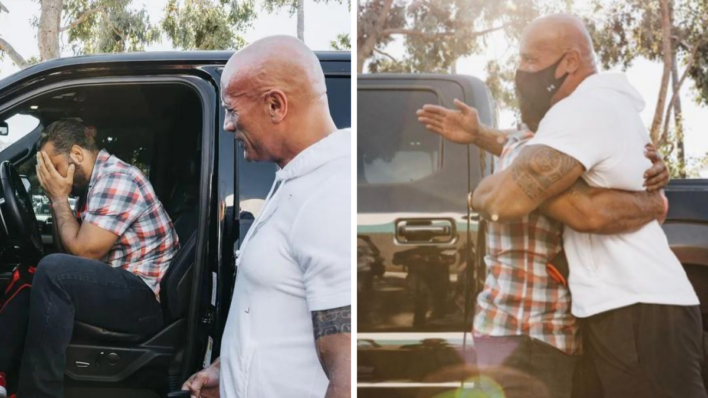 The Rock’s amazing generosity shone once again when he gifted a fan with one of his favorite personal items.
By Sophie Babinski    December 24, 2021

The Rock’s amazing generosity shone once again when he gifted a fan with one of his favorite personal items.

Dwayne “The Rock” Johnson is the world’s highest-paid actor, with legions of fans and admirers.

Beyond his amazing movie career, he also motivates millions on his Instagram, where he recently showcased one of his good deeds.

The Rock’s Generous Gift to a Complete Stranger

Dwayne Johnson’s most recent movie, Red Notice, was a big hit, and marked a new high in the actor’s career. In order to honor it, Johnson decided that he wanted to gift one of his fans with a something special. Originally, he wanted to gift them with a special Porsche featured in the movie, but Porsche declined to provide one.

So, selfless as ever, Johnson decided to donate his own customized, souped-up Ford F-150 Raptor. He loved the car so much he called it his “baby”. He perused the profiles of all of the fans who were attending a special screening of the movie, and chose one man he thought especially deserved the truck.

“[It was] just an honor for me to give a little bit of joy to someone who deserves a lot more than just my truck.”

Johnson chose to gift his truck to fan Oscar Rodriguez, a veteran, church leader and personal trainer, who acts as a caretaker for his 75-year-old mother in his spare time. Not only does he help with his mother, he also advocates for victims of domestic violence.

Johnson chose him for his optimist, positivity, and the way he continues to motivate those around him. Rodriguez was so touched by Johnson’s actions, saying: “I’m just speechless. I’m so glad to meet you, I feel so encouraged right now, so uplifted. I’m encouraged by your motivation. I follow you on Instagram, I listen to your words. You inspire me. And yeah, let’s do it. Let’s change the world, one person, at a time.”

“I gathered as much information as I could about everyone in the audience and ultimately, Oscar’s story moved me.”

How The Rock Revealed His Big Gift to a Big Fan

Dwayne Johnson found Oscar and surprised him, handing him the keys to the truck. Completely shocked, Rodriguez fell to his knees, saying: “what the heck is happening?”, and he jumped up to hug Johnson. After inheriting the Rock’s beloved truck, the Navy veteran drove away, telling his idol “It’s just love, bro”.

“I have no words to express how blessed and grateful I am!! Again, no words only scripture, with my whole heart, with my whole life, and with my innermost being, I bow in wonder and love before you, the holy God! Yahweh, you are my soul’s celebration. How could I ever forget the miracles of kindness you’ve done for me?” ‭‭Psalms‬ ‭103:1-2‬ ‭TPT‬‬.”

Dwayne Johnson is one of the world’s most successful actors, but that success hasn’t gone to his head. He is always looking to give back, and that’s something that all people in positions of privilege should try to do.