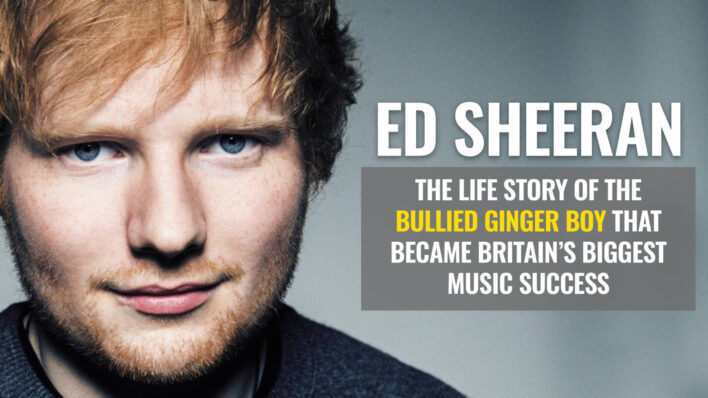 Ever wonder how Ed Sheeran’s life story goes like? Well, he – like many of us – didn’t have it easy. Dealing with his fair share of struggles from bullying, to inner battles, insecurity and shame, to becoming an award-winning singer, Ed Sheeran’s story shows how the artist learned to embrace his uniqueness and overcame his challenges in order to bring us one of the most beautiful voices of our time.

The English singer, songwriter, and guitarist is loved by young and old everywhere across the world. His voice gathers people together, even those who usually don’t prefer this type of music. He appeared on stage as a shy ginger boy, but instantly won the hearts of everyone listening. And that was just the beginning. Let’s take a closer look at the struggles and wins of pop superstar Ed Sheeran.

Music was his first love

Edward Christopher Sheeran was born in February 1991 in Halifax, England. He had one older brother and his parents were running an art consultancy at the time. Image: Ed Sheeran as a child. Credit: The Telegraph

While he struggled with socializing in school, he had an interest in music from a very young age. He became part of a church choir at 4 and soon started playing the guitar. At 11 he was already writing songs, which was inspired by a backstage chat with Damien Rice. Not only was his love for music obvious, but also his talent started being noticed by others around him.

“It was my love for the guitar that first got me into music and singing.”

The good and the bad of being a ginger

Ed Sheeran was bullied every day at school, mainly for his stutter and oversized glasses.

As a kid, he had a surgery that went wrong and left him with a lazy eye and severe speech problems. Whenever he tried speaking up in class, his mouth would freeze and no word would come out. Other kids were mocking him about this. Soon, he stopped participating and raising his hand at all.

Surprisingly, that wasn’t the case when it came to singing and making music. He enjoyed singing in the local church and shares that playing the guitar in his room was the only time he felt in control.

His red hair wasn’t helping him with his image in school, of course. However, he realized early on that while ginger men aren’t attractive, they do need to count on taking action if they want to make something happen. In addition, he shares it’s what saved him as a musician.

“Being ginger can seem like a bad thing when you are young but as a musician it has been my saving grace – because if you see a ginger kid on TV and there is only one messy-haired ginger kid who plays guitar, it is very easy to find them on YouTube.”

The start of a career in music

Speech therapy wasn’t going well and one of his biggest fears was that he’ll be like that for the rest of his life. But things changed when one day his dad brought him Eminem’s record. Ed Sheeran was amazed by how fast the singer was rapping. This inspired him and he learned every word by the time he was 10.

He began writing more of his own music, and suddenly his stutter was gone. You can listen to him openly share his experience in this powerful speech:

Ed knew music was his calling and he had to do something about it. So in addition to playing the guitar and writing songs, he started performing in different venues. Soon he had 12 shows in a week. That continued for four years, and not long after he was already recording CDs and selling them.

At the age of 14, Ed Sheeran took his guitar, packed some clothes, and headed to London to officially start his music career and see where it can take him. When life gets tough…

Being on the road was far from easy. He shares that when he couldn’t find a couch for the night, he had to sleep in parks or in the subway. He had some nights when he didn’t have any money for food and was often on the verge of giving up. But he didn’t.

In London, he was playing in small venues, producing more of his own music, releasing albums, auditioning and doing collaborations with singers he met along the way. He played in more than 300 shows in 2009 alone.

The big leap was in 2010, and while it wouldn’t be possible without the hard work and everything Ed Sheeran had done so far, social media made the success of the boy happen faster.

Not many singers were leveraging the potential of social media channels at the time, but Ed Sheeran quickly spotted (and leveraged) their potential. He was posting his videos online, and one of them was noticed by the rapper Example, who liked his style so much that he invited him to tour together.

That helped him grow his online presence more and more, and people across the world started tuning in to his YouTube videos. Soon the media started paying attention to the ginger boy with the guitar and the amazing voice, and some big names and newspapers started mentioning him.

That allowed Ed Sheeran to start dreaming bigger. He knew that if he wanted to see progress, he had to move to America.

He arrived in LA without a recording contract or a place to stay.

He began sending out his music to anyone he could reach out to, but received no answers. Until one day, while on the show of a local radio host, he was brought to the stage. Terrified, he started playing. 12 minutes later, he got a standing ovation.

The host’s name was Jamie Foxx, who was so impressed that he let Ed Sheeran use his recording studio. Not just that, but he also let the boy crash on his couch for a few weeks. After hitting #2 on iTunes with a new release, Ed was invited to work with Atlantic Records. With their help, he created his label debut studio album “+”. It immediately sold 102,000 copies and later that year became the second best-selling debut album in the UK. A year after the release of “+”, it had already sold more than a million copies.

After this instant hit, he collaborated with One Direction and Taylor Swift. Another one of his songs, “I See Fire”, was used in the movie The Hobbit.

Being weird is a wonderful thing

Ed Sheeran’s life story is one of the modern inspiring tales that can bring back the hope in the starving artist and the unpopular kid. He likes to remember the fact that one of the coolest kids from his school later ended up being his plumber. That’s why he believes in being yourself rather than following the crowd or hiding your differences.

I hope that the events in Ed Sheeran’s life so far and all that he’s been through will motivate you to do something big too. We all have it within, and we need to embrace our uniqueness, work with what we’ve got, and never stop trying.

“When the world’s against me is when I really come alive.”