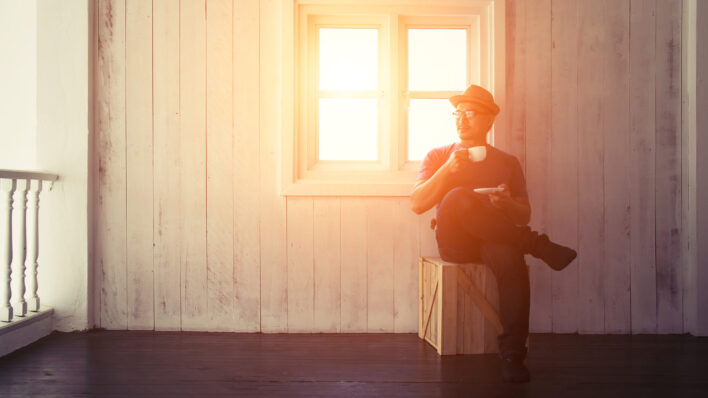 Do you believe that life can get in the way of happiness? In our quest for success, we sometimes forget

Do you believe that life can get in the way of happiness? In our quest for success, we sometimes forget

Do you believe that life can get in the way of happiness? In our quest for success, we sometimes forget to give ourselves a break and just be happy. In this piece, I share a personal struggle with stress, how it derailed my state of mind, and how I regained it by choice. Past and future are in the mind only — I am now.

I found myself staring blankly into the distance. Though Zen music filled the air, my mind raced from one stressor to the next: What am I going to say tomorrow at the leadership meeting? Why didn’t we catch this issue earlier in the project? When will I have time to work on the naked bathroom that we ripped out last year? What about the book project for charity? Should I start the garden over? Why aren’t the plants growing on this side of the yard?

For each of those questions, my mind always returned a negative sum outcome, and the negativity allowed panic to creep in. Damn it! When is all this going to be over so I can finally relax? Instead of seizing that exact moment to breathe, I started making excusable plans that made it okay for me to be in this embroiled mental state. The one I clung to the most was the self-preserving “if… then later…” formula. It’ll be okay. IF I can hang on a little longer to get this project over with, THEN I can finally relax. If this thing happens, THEN I’ll be stress-free. If this other thing works itself out, THEN I’ll be happy.

The formula pushed what potential joy and relief I could have had at that moment to later. The only problem was the uncertainty of when this “later” would come to be. Sometimes, later comes too late or not at all.

The only problem was the uncertainty of when this “later” would come to be. Sometimes, later comes too late or not at all.

Forgiving oneself and letting go

Denying myself the relief was, perhaps, punishment for having put myself into that situation in the first place. The what-ifs made their round. What if I had talked to this person first before pursuing this fix? What if I had said this instead of that? What if? What if? Even though some of the events transpiring before my eyes were out of my control, I felt responsible for them occurring. You are your harshest critic — as people would say. The moment that broke my concentrated self-sabotage and gloom came as I observed my cat playfully pouncing on a piece of rubbish on the floor. He squatted at the rogue piece of cardboard, and, getting so worked up by its random movement, startled himself as he spryly sprung up into the air and darted out of the room.

The moment that broke my concentrated self-sabotage and gloom came as I observed my cat playfully pouncing on a piece of rubbish on the floor.

I chuckled at his silliness.

That simple moment snapped me out of my stupor, and all the complicated scenarios started to simplify themselves.

The first domino to fall was my acceptance of the mistakes I made, and forgiving myself. Then it was the acceptance that no matter what I did, didn’t do, or will do, life will continue to happen, and with it will come stress and undesirable situations. Finally, I chose to defer later and embraced now.

I used to believe that happiness was waiting around the corner. In order to obtain it, I had to satisfy the prerequisite of accomplishing something or meeting some milestone or being there when something changes the current situation. When I have a girlfriend, I’ll be so happy. When I buy that car, I’ll be on cloud nine. When I get that promotion, I’ll be so thrilled. When the rain stops, I’ll be able to enjoy life so much more. When I retire, I can finally go on that trip I’ve longed for.

It would certainly feel more deserved if that were the case; there would be a cause for celebration. But those ‘big’ events don’t occur everyday. They are few and far between. How about the rest of the time? Why is this very moment not good enough for us to embrace? Why is now not a good time? Would five minutes from now be a better time? What’s to say that we’d still be here in five minutes?

In the absence of a grand trigger such as getting a promotion, relish in the fact that you’re still here. Find simple things to take pleasure in. Dive into a conversation with your friend and pay full attention. Be thankful and enjoy the things that you do have. And celebrate small victories whenever they occur.

Now is as good a time as ever. So defer later; embrace now.