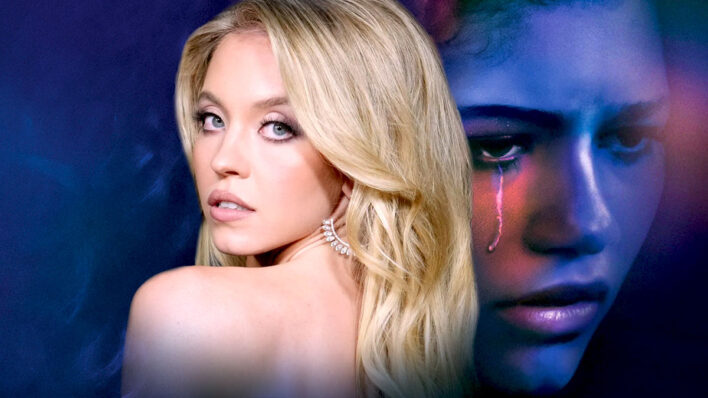 Women in show business are regularly subjected to different standards than their male counterparts. As Euphoria’s Sydney Sweeney explains, nudity may be the perfect – and most problematic – example of why.
By Maya Khamala    March 9, 2022

Women in show business are regularly subjected to different standards than their male counterparts. As Euphoria’s Sydney Sweeney explains, nudity may be the perfect – and most problematic – example of why.

Mila Kunis wrote a memorably scathing open letter about an unnamed Hollywood producer who told her she’d “never work again in this town” when she declined posing half-naked on the cover of a magazine. Unfortunately, Kunis’ piece is hardly alone. Ever since the #metoo movement, throngs of other actresses who have had similar experiences, or far worse, have come forward to tell their stories, each more harrowing and disturbing than the last.

Thankfully, the days of keeping quiet about the countless micro or macro-aggressions that happen on Hollywood sets, just to keep the status quo intact, are disappearing.

When It Comes to Nudity in Hollywood, Women Are Damned if They Do Or Don’t

Despite landing breakout roles in The Handmaid’s Tale and The White Lotus, Sweeney is best known for her role as Cassie Howard in the HBO teen drama Euphoria. The show, written and created by Sam Levinson, is known for its bold depiction of its characters’ lives, and includes ample scenes with drug use, nudity and profanity.

Sweeney has suggested that the reason her performance in Euphoria’s first season didn’t get more acclaim was due to her nude scenes. In a January interview with the Independent, she unabashedly exposed the double standard at work in her industry.

“I’m very proud of my work on Euphoria – but no one talks about it because I got naked,” she says, pointing to the fact that even though she’s best known as Cassie Howard, she won’t be receiving any accolades for it.

“When a guy has a sex scene or shows his body, he still wins awards and gets praise. But the moment a girl does it, it’s completely different,” she says, discussing what she calls the “stigma against actresses who get naked on screen.”

In January, Sweeney asked Levinson to cut some of Cassie’s nude scenes, and he was happy to oblige. In an interview with the Independent, she called the show’s creator “amazing,” describing how he was consistently receptive to her notes about gratuitous nudity throughout production.

“There are moments where Cassie was supposed to be shirtless and I would tell Sam, ‘I don’t really think that’s necessary here.’ He was like, ‘OK, we don’t need it.’ I’ve never felt like Sam has pushed it on me or was trying to get a nude scene into an HBO show. When I didn’t want to do it, he didn’t make me.”

Although Euphoria has been called out recently for being a “toxic and unsafe” workplace due to its 15-17 hour workdays, and even refusing to allow bathroom breaks for more ‘complex’ shoots, it has nonetheless been celebrated for its approach to nude scenes in general and its understanding director in particular.

The way Sweeney sees it (and many would agree), all nude scenes should be approached this way. In other words, valuing consent and sensitivity to actors’ concerns shouldn’t be something rare worthy of celebration. Rather, it should be totally normal.

Fortunately, it’s stars like Sweeney who advocate for themselves that are helping to change that old, outdated status quo.

How Euphoria’s Sydney Sweeney Learned to Stand up for Consent

As much as Sweeney’s candor and sense of self should 100% be celebrated (and emulated by young actresses just entering the biz), she has admitted that some of her previous shoots left her feeling ‘disgusting’.

“I’ve had experiences where I want to go home and scrub myself completely raw because I feel disgusting,” she says.

“I didn’t feel comfortable with my castmate or the crew, and I just didn’t feel like my character would be doing it,” she says, adding that she “didn’t feel like [she] was able to speak up” and voice her concerns at the time. She has confessed that she worried she’d “done too much” when watching some of those nude scenes, such as those in her 2021 movie The Voyeurs.

“There are hour-long compilations of world-famous male actors with nude scenes who win Oscars and get praised for that work,” she says. “But the moment a woman does it, it degrades them… There’s such a double standard and I really hope I can have a little part in changing that.”

If Sweeney’s track record is any indication, she’s more than up to the challenge. This, after all, is the same woman who, as a preteen, persuaded her family to move from Spokane to LA with the help of a carefully crafted PowerPoint presentation — complete with a five-year plan for how she strived to make it happen.

“I love something that feels like a challenge,” she told Cosmo. At 24 years old, Sweeney is already a strong role model and trailblazer at heart. And she’s worthy of praise, both for her talent as an actor and her will to speak out.