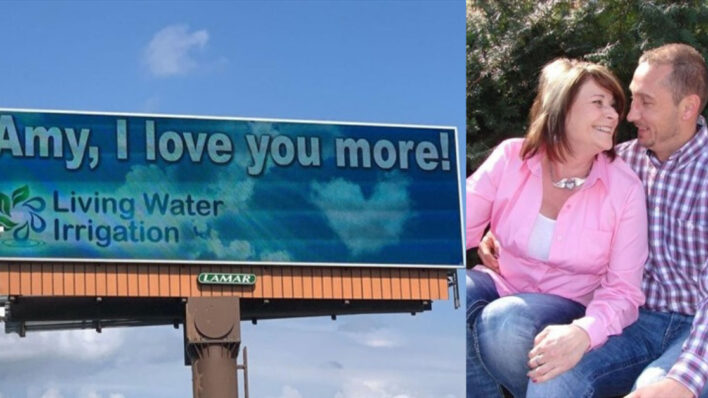 He Turned an Expensive Business Mistake Into the Ultimate Romantic Gesture

Like, for example, a bunch of billboards across Tulsa, Oklahoma that read: “Amy, I love you more!”

It sounds romantic and raises the question of the story behind the proclamation, but given the words are above a logo for the Living Water Irrigation company, it’s rather confusing.

Why does someone have to tell her he loves her “more” on a billboard? And what does it all have to do with water irrigation?

It turns out the billboards were a giant love note from Josh Wilson to his wife Amy Wilson.

Five years ago, in a country-western bar in Tulsa Oklahoma, a man in sandals and golfing clothes walked up to a woman named Amy and asked her to dance.

“When Josh came to the bar straight from the golf course and asked me to dance, at first I thought, ‘Who is this weirdo and why is he wearing flip-flops instead of cowboy boots?” she recalled.

Still, Amy took the chance and accepted his request. It was love at first dance.

As Josh explained, “I knew after we danced the two-step that we’d be together from that moment on.”

The couple has a history of romantic declarations being clearly spelled out, as Josh proposed three years ago by writing “Will you marry me?” on the sand during a beach vacation.

How the billboards came to be

“A lot of people wondered if I was in trouble with Amy, but the truth is, I just adore her,” said Josh, who runs the Living Water Irrigation sprinkler company with his wife of three years.

But why the billboards? Well, it was actually to make up for his losses after a business decision that didn’t work out!

Josh discovered in August that he couldn’t cancel the one-year, $1,200-a-month billboard campaign he’d taken out in January to promote their sprinkler company.

The billboards just weren’t getting the job done in bringing in new customers. Rather than despair at the money he had lost, Josh resolved to find a way to do something positive with the remaining billboard campaign.

It was Josh’s business coach, Clay Clark, who suggested the romantic solution: “Since you’re always talking about how much you love your wife, why don’t you just say something to her on the billboards?”

You might as well turn it into a positive.

Amy, however, didn’t see the signs until they’d been up for a couple of weeks.

“I got busy with work and actually heard about all of this when a local news station did a story,” she said. “Everyone had been wondering, ‘Who’s Amy?’ “

As much as Amy adored her husband’s declaration of love, she’s ready for him to switch up the signs to feature a different love they share.

“We’re going to put up a photo of our five dogs,” said Josh. “We both think it’s perfect. I love them madly, too.”