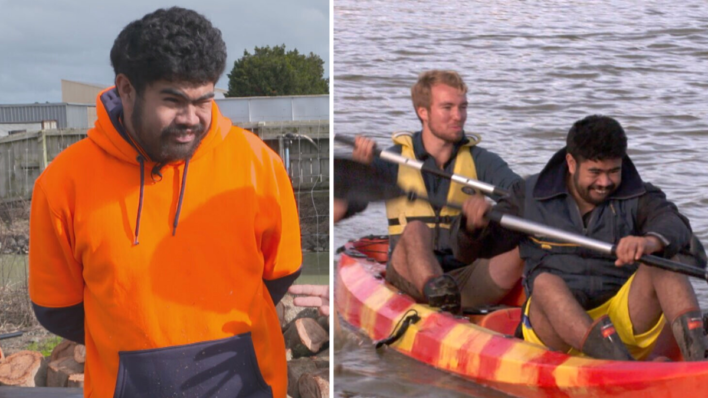 One man put his faith in a total stranger and the resulting friendship is an incredible reminder of the power of kindness.
By Amber Dowling    April 21, 2022

One man put his faith in a total stranger and the resulting friendship is an incredible reminder of the power of kindness.

There are many theories about what makes the world go round, but one thing is for sure: without friendship, it can be a pretty lonely place. It can also be a frustrating place for someone with a disability, which one man, unfortunately, knew all too well.

RELATED: 9-Year-Old Best Friends Torn Apart For 82 Years Due To The Holocaust Finally Reunite Thanks To One Stranger

Luckily, in a cosmic turn of events, he just happened to pick the right stranger to ask for help on social media.

Why One Man Decided to Message a Total Stranger on Facebook

Jack Keeys, a 25-year-old AgriFoods researcher and analyst in New Zealand, was minding his own business in 2019 when he received a random Facebook message from a stranger named Brian Reeve. Reeve needed some money for clothes, so he reached out.

He was trying his luck and it worked out for the both of us.

According to One News, Keeys believed Reeve, 22, was genuine, so he asked if he could instead take him out for lunch. The two then arranged not only to go out for a meal, but Keeys picked up this total stranger from his house and took him to McDonald’s.

“I’d never met him before at this point,” Keeys told the news outlet. “I replied and said, ‘I can’t send you money directly but how about I take you out for lunch and figure out if I can help you.’ Brian and I probably wouldn’t have crossed paths if he hadn’t reached out. He was trying his luck and it worked out for the both of us.”

How a Random Facebook Message Led to a New Friendship

Right away Keeys could tell Reeve had special needs. Throughout their meeting, he learned Reeve had attended a special needs school and was now on disability allowance while looking for a job. At that point, no one would give him a shot and he just didn’t have enough cash left over for some basic needs.

At the time, Reeve was sleeping on a one-seater couch and didn’t really seem to have friends. So Keeys stepped in and helped his new friend make a resume. He also hired him to help with a gardening project and paid him for a few hours a week.

As the friendship carried on, Keeys asked if he could help Reeve with his budget. It was then he learned others were taking advantage of the man and funnelling money into mysterious and shady accounts. So Keeys got on the phone and spent six months calling these businesses and accounts and correcting the situation.

Through it all, Keeys’ initial kindness developed into a deeper and more meaningful friendship for both men. These days, the guys are best friends.

How Two Men and the Story of Their Friendship Went Viral

About a year into their friendship, Keeys made a TikTok video of this new friendship to inspire others to be kind and follow their hearts when they come across someone in need. That initial video, which he posted in April 2020, went viral.

“Sometimes it’s worth giving people a chance,” Keeys wrote in the caption. “Spread love,” he added in the video itself, in which you can see himself and Reeve going bowling. About a month later, in another TikTok video, Keeys revealed he had been contacted by TVNZ and their story would be shared across the country to motivate others.

Don’t be afraid to reach out to those around you who may need a little help on their way, you never know what may come from it.

RELATED: High School Teen Taken By Surprise When He Finds Out The Reason Why His Friend Worked A Job For 2 Years

The friends watched their segment together the next night, but it didn’t stop there. The story resonated with so many people, it became the most-watched video on the outlet’s social media accounts, and many others reached out with offers to help Reeve.

“Brian has gone from in-debt, unemployed and lonely, to financially free, with multiple job offers, and friends reaching out across the country,” Keeys updated followers in an Instagram post. “Brian has taught me about friendship, kindness, and that you can always find a smile and a laugh no matter the circumstance. Don’t be afraid to reach out to those around you who may need a little help on their way, you never know what may come from it!”

How Taking a Chance on Kindness Can Lead to Unexpected Rewards

To this day, Keeys and Reeve are friends. Keeys recently made a deal with his buddy that if he saved up $400, he would take him anywhere in the country. It took six months and a few chores, but the pair recently spent the weekend in Dunedin.

It just goes to show you, a little kindness can lead to all kinds of unexpected outcomes, for you and the person you’re helping out. Keeys has faced a ton of hardships and unexpected setbacks in his own life (the death of both his father and stepfather from cancer, along with two surgeries of his own after doctors found a melanoma tumor in 2019). So he knew how much the support of someone else could mean to a lonely stranger, and he took a chance.

RELATED: Quick-Thinking Man Acts Like Woman’s Friend To Save Her From Creepy Stalker

It’s a motivational story that reminds us to take a chance on the people in our own lives a little more often, too. While not all of us would be comfortable taking a random person out for lunch after a strange Facebook message, there are other ways of spreading kindness.

Maybe that means packing a lunch for the person you always see at the corner asking for change. Perhaps it means putting together a care package for a friend you’ve fallen out of touch with after seeing they’re struggling on social media. Or potentially, that means surprising a friend with flowers.

However you choose to practice kindness, this story reminds us of one important thing: kindness may be the thing that makes the world go round after all.