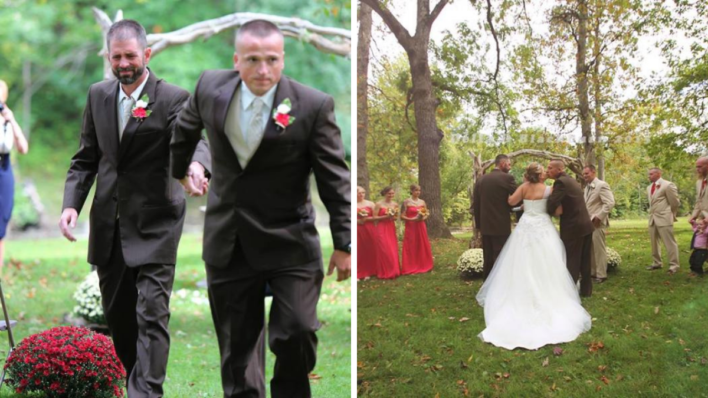 A father’s stand-up deed at his daughter’s wedding has gone viral, proving that it’s more than possible to handle divorce
By Joel Balsam    May 26, 2021

A father’s stand-up deed at his daughter’s wedding has gone viral, proving that it’s more than possible to handle divorce with maturity and respect.

They walked the bride down the aisle together

Todd Cendrosky, step dad of bride Brittany Peck, had no idea what was coming.

After walking his wife down the aisle, Cendrosky looked on as another Todd (Bachman), Peck’s biological father, walked her down the aisle.

“What dad doesn’t want to walk his daughter down the aisle?” Cendrosky told The New York Times. “So yes, I was disappointed.”

An added weight on Cendrosky’s shoulders was that he’d been diagnosed with ankylosing spondylitis, which causes loss of mobility in the spine, along with Crohn’s disease and lupus, so he feared he’d be in a wheelchair when it came time for his other daughter’s wedding.

But then the unexpected happened. Bachman walked up to Cendrosky, reached out his hand, and invited the step dad to walk their daughter down the aisle together.

“He came and grabbed my hand, and said: ‘You worked as hard as I have. You’ll help us walk our daughter down the aisle,’ ” Mr. Cendrosky told WKYC in 2015. “I got weak in the knees and lost it. Nothing better in my life. The most impactful moment in my life.”

It took 2 dads to raise this daughter

The wedding photographs of the moment the two dads walked down the aisle went viral, earning over a million likes on Facebook and being shared by the likes of actor Ashton Kutcher (the photos have since been taken down).

“When Todd Bachman grabbed my husband’s arm, it really meant a lot to me,” said the mother of the bride, Candace Cendrosky, to The New York Times. “That was an awesome moment, it was magical, it was an outstanding thing to do. He made my husband’s world, he really did. And that makes me feel great. Deep down I really do believe he did this for Brittany.”

Bachman said he planned to invite Cendrosky up ahead of time, warning his daughter, though not his ex-wife.

“For me to thank him for all the years of helping raise our daughter wouldn’t be enough,” Mr. Bachman told WKYC. “There is no better way to thank somebody than to assist me walking her down the aisle.”

“Todd Cendrosky has been to the softball games, the choir concerts, he’s been a big part of her life,” Bachman said later to The Times.

“It’s not about me. It’s not about him. It’s about her. We’ve worked so hard to get to this point. The dark days are long behind us.”

After the momentous event, the bride danced with both dads — the song playing for her biological father was Brad Paisley’s version of “I Loved Her First,” and for her stepfather it was Mariah Carey’s “Hero.”

“They were both there for me — they raised me,” Peck said. “A huge weight was lifted off my shoulders that day.”

If you can’t forgive, respect

For millions of people, divorce in the family can hang over their entire lives, complicating holidays, gatherings, and certainly weddings. But it doesn’t have to be that way.

Bachman’s gesture showed that what happened in the past can stay in the past, and he wasn’t going to let any of his personal feelings get in the way of his daughter’s big day. Surely many have been inspired by Bachman’s impeccable display of respect, and perhaps have even follow his example in their own complicated families.