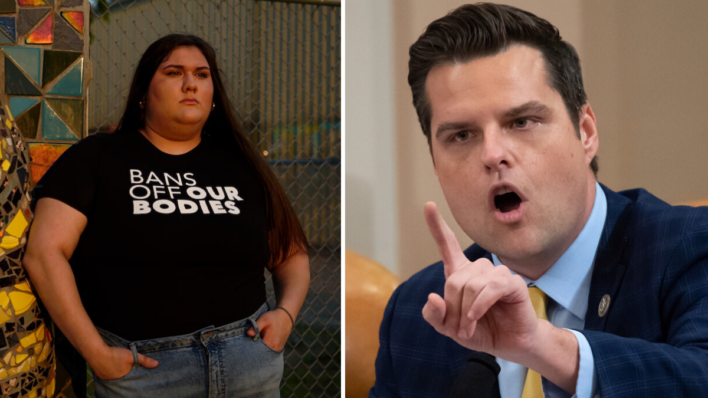 Congressman Matt Gaetz Body-Shamed a 19-Year-Old Girl – Her Response Is a $1.5M Win for Abortion Access

When Florida Congressman Matt Gaetz body-shamed a 19-year-old girl, she turned the situation around and started raising money for abortion access.
By Amy Lamare    July 30, 2022

When Florida Congressman Matt Gaetz body-shamed a 19-year-old girl, she turned the situation around and started raising money for abortion access.

Florida Congressman Matt Gaetz messed with the wrong teenager. When he casually body-shamed a 19-year-old girl from Houston for her weight on Twitter, he had no idea that he just started a massive storm. Gaetz recently gave a speech in which he claimed that women who are worried about losing access to abortion healthcare are too unattractive to become pregnant. He then shared an article from the conservative outlet Newsmax explaining his rant about abortion rights activists, saying it would be “sure to raise the dander of his political opponents.” He attached a photo of Olivia to the post.

This didn’t faze Olivia for even a moment. She took the situation and decided she’d use her newfound notoriety to raise money for a currently hot-button issue that’s near and dear to her heart — abortion access. She wrote, “In honor of Matt Gaetz publicly body shaming me, I’ll be fundraising for the @genzforchange abortion fund. The GenZ for Choice fund splits donations across states where services are most needed. You can donate to the link below.” And boy, did people ever respond to her call to action.

The Incendiary Speech Congressman Matt Gaetz Made at an Event

At a Turning Point USA Student Action Summit in Tampa last weekend, Congressman Matt Gaetz gave a speech saying that unattractive women shouldn’t worry about losing access to abortion. “Have you watched these pro-abortion, pro-murder rallies? The people are just disgusting. Why is it that the women with the least likelihood of getting pregnant are the ones most worried about having abortions,” Gaetz ranted. He continued, “Nobody wants to impregnate you if you look like a thumb.”

RELATED: Greta Thunberg is Time Magazine’s Person of the Year

It should be noted that Gaetz’s line is basic reverse plagiarism of legendary comedian George Carlin’s line, “Why is it that most of the people who are against abortion are people you wouldn’t want to f**k in the first place?”

This isn’t a new rant for the congressman. In May, he tweeted: “How many of the women rallying against overturning Roe are over-educated, under-loved millennials who sadly return from protests to a lonely microwave dinner with their cats, and no bumble matches?”

It should be noted that Congressman Gaetz is currently under investigation for sex trafficking in relation to the charges of paying women for sex and having sexual relations with a minor who he transported across state lines. He has denied any wrongdoing.

Why One Young Woman Raised More Than $1.5M for an Abortion Rights Group

After Matt Gaetz publicly body-shamed Olivia Julianna, she immediately responded with her plan to raise money for abortion rights. She has been tracking donations and updating the number on Twitter. As of this writing, Olivia has raised more than $1.5M for GenZ for Choice, one of the largest political youth organizations in the country. Olivia is a political strategist for them.

When Olivia saw Gaetz’s fat-phobic comment, she felt compelled to reply, saying, “I’m actually 5’11. 6’4” in heels. I wear them so small men like you are reminded of your place.” Gaetz then took to Twitter and shared Olivia’s Twitter bio picture (in which she’s wearing a t-shirt that says, “Bans off our bodies”) and captioned it: “Dander raised.” He has 1.4 million followers. Olivia has slightly more than 200,000 followers.

It was at this point that Olivia decided she would not take his criticism laying down and launched the campaign to raise money for abortion rights. In an interview with Teen Vogue, she remarked that she thinks Gaetz is scared by the strength of her support, saying, ”I honestly think he’s terrified. I would be if I tried to go after someone and their response was to raise $168,000 in less than 48 hours.”

In her Twitter feed, Olivia revealed that she’s a community college student working her way through school. She plans to get a bachelor’s degree in political science and will be the first person in her family to graduate from college.

Olivia Julianna took lemons and made the most delicious lemonade out of them. This is a lesson for everyone to take the high road and not give in to bullies and detractors. Evaluate the situation and realize that when people lash out at you and criticize your body or your looks or what you believe in, that’s coming from a place of insecurity in the accuser. How can you flip the script like Olivia did to create positive change in your life and your community?

Olivia saw the opportunity in a situation where less self-aware and confident people might have been hurt by. She is an inspiration and someone to watch. This young lady is going places.