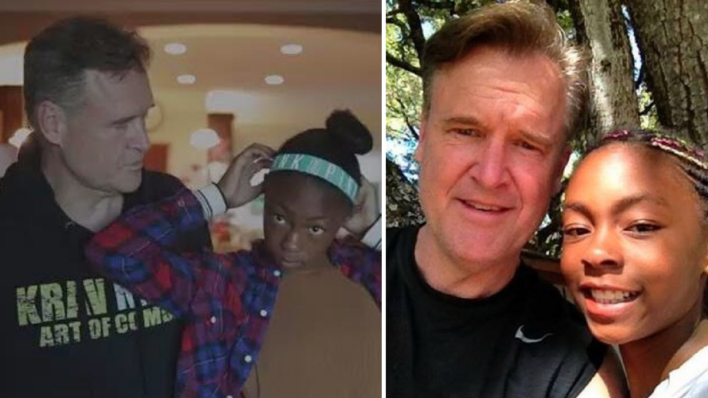 One television personality’s moment of racial reckoning set the internet on fire and inspired some crucial conversations.
By Bryan Liquor    February 28, 2022

One television personality’s moment of racial reckoning set the internet on fire and inspired some crucial conversations.

After unsuccessfully trying to have a second child, Frank Somerville, anchorman on Fox affiliate KTVU, and his wife decided to adopt their daughter.

In an interview with Care, Somerville said that the fact she was Black didn’t even enter his mind.

“It’s like having a pink kid, a purple kid, a white kid. A kid is a kid. She happens to look different from me, but she’s just a kid,” he said, adding, “I love that I have an interracial family, and I wouldn’t trade it.”

Little did Somerville know, those words would be tested and leave him forever changed.

A crisis of conscience

One evening, Somerville spotted a woman waiting at the bus stop and walking nearby was a Black man in “kind of ‘street’” or “street casual” clothes. Somerville recalled eyeing him like a hawk.

“I was across the street and instantly thought to myself: ‘I’m going to watch this guy just to make sure he doesn’t do anything to the woman,’” he remembered.

However, the whole scene flipped when a moment later, a boy ran up to the man and grabbed his hand. That ‘suspicious’ Black man was just a father with his child.

Somerville, the model citizen who had welcomed a Black girl to his family, was now confronted with his own racial bias.

Struggling with what to do, he did made the bold move of sharing his experience on Facebook. There, he came clean about his uncomfortable introspection.

“All of a sudden my whole view of the guy changed,” he wrote. “I realized he was a dad just walking down the street with his son. I realized that he was ‘okay’ and wasn’t going to do anything. I was so angry with myself.”

Somerville instantly thought of how he had let his daughter down.

I just had a talk with my daughter about how people might treat her differently from her ‘white’ sister based solely on her skin color. And now here I am doing the EXACT same thing. I was/am really disappointed in myself.

The post quickly went viral, with over 63,000 likes, 26,000 shares, and scores of comments, many of which were positive.

“I have to hand it to you for admitting that it was the color of his skin and not how he was dressed. It’s not easy facing something unpleasant about ourselves,” posted one.

Others were uncomfortably candid.

I used to go out of my way to be nicer to African American people than I did others, “to make up” for any injustice they were getting. A Black friend pointed out that was not helping, I should be treating all people the same.

Another wasn’t so sold on his story, piping, “There is a reality of why you were scared. Own it.”

Somerville is quick to add that he’s colorblind when it comes to his daughter.

“One thing I don’t say is I never call her my ‘adopted daughter,’ she’s my daughter who happens to be adopted. There’s a subtle difference there. It drives me crazy when someone says, ‘Is that your adopted daughter?’ I always tell them, ‘No, she’s just my daughter.’”

However, as he continues to confront his own racial biases, Somerville says that success starts with one important step.

We ALL have them (racial biases). And the only way to eliminate them is to realize that they are there in the first place.

It will be a long process of self reflection and healing for Somerville and his family. However, by him revealing his own racial bias, he’ll inspire others to do the same and have those crucial, yet meaningful conversations.