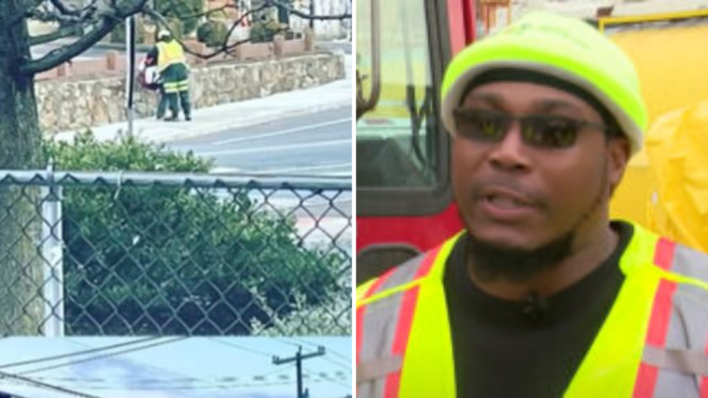 One garbage man in Norwalk, Connecticut, stopped his truck to give a woman down on her luck a hug.
By Sophie Tolias    May 31, 2022

One garbage man in Norwalk, Connecticut, stopped his truck to give a woman down on her luck a hug.

Dave Kuban and Carlos Gonzales, owners of Dave and Charlie’s Hometown Deli in Norwalk, were getting ready for the morning rush when they looked out the window and saw something special.

A garbage man stopped his route and approached a young woman on the side of the road who was clearly down on her luck. “We just saw him hugging her for, I don’t know, I want to say five minutes if that. But it was a real hug,” Carlos Gonzales told News 12.

RELATED: Man Sees Boy Living In a Garbage Dump And Is So Moved He Surprises Him With a Home

Gonzalez said the driver also gave the woman money. Kuban took a couple pictures and posted to a Norwalk Facebook group about the kindness he had just witnessed.

Why a Garbage Man Hugged a Young Woman on the Road

The post, which quickly went viral, called on the community to help find him so the deli could give him a free lunch.

“We wanted to show him we appreciate him doing something like that. We need that in the world today.”

RELATED: As A Child, She Lived In A Garbage Dump – Today, She Just Earned A College Scholarship

The community led the deli owners and News 12 to Mike Nance, an employee at WIN Waste Innovations.

Any time you see somebody walking around with everything that they own, talking to themselves — I don’t know. It just took over me.

After talking to the woman and giving her some cash, Nance said he felt compelled to offer more comfort.

“So I hugged her. I said a prayer, and that was it,” Nance said.

How One Act of Kindness Can Lead to Others

But that wasn’t it. The story inspired so many people online.

RELATED: Garbage Man Realizes Something Is Wrong When He Notices 90-Year-Old’s Trash Hasn’t Been Taken Out

Nance’s good deed also inspired the deli owners. “After we saw him do that, we made her a little breakfast and brought it over to her. It’s a domino effect,” Gonzales said.

Nance was happy to hear his act of kindness had a domino effect.

If that comes out of it, then that’s amazing. There’s a lot of good people out here in the world.

It only takes a moment to be kind and you never know how your kindness will impact and inspire others.

it takes a moment to be kind
“How do we change the world? One random act of kindness at a time.” — Morgan Freeman
Tags
Share
← Prev Post Next Post →