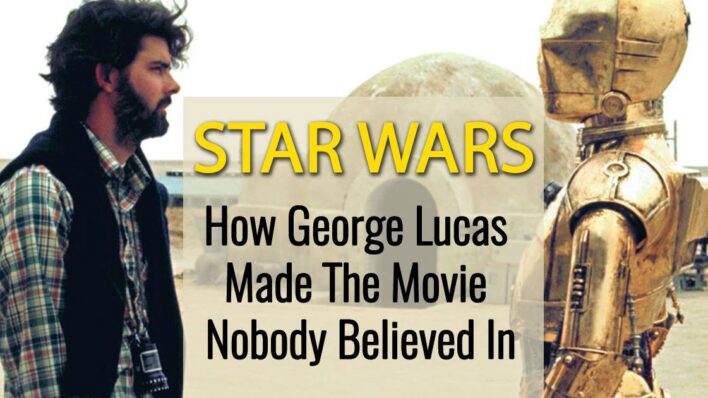 Star Wars: How George Lucas Made The Movie Nobody Believed In

George Lucas became famous for creating the Star Wars sci-fi franchise. Millions of viewers worldwide have been captivated by the
By Goalcast    December 14, 2017

George Lucas became famous for creating the Star Wars sci-fi franchise. Millions of viewers worldwide have been captivated by the adventures of three rebels, two bumbling droids, and an endearing wookie “a long time ago in a galaxy far, far away.” However, the epic space saga almost never made it to the big screen.

With no money and a bizarre idea that wasn’t welcome in 1970s Hollywood, George Lucas was just a man with a vision that nobody understood. This is the story of how he pushed against all odds to create a movie that would ultimately mark cinematic history forever.

The beginning of a masterpiece

George Lucas was a struggling filmmaker living in a one-bedroom apartment in Mill Valley. A simple man trying to make his way into the movie business, he spent his days writing and working as an editor on the side. After two and a half years, he managed to finish directing his first film called American Graffiti. The low-budget production was led by Universal Studios, although the release date was nowhere in sight. However, the studio requested a second idea for a movie.Lucaspounced on the opportunity to fulfill his dream of adapting Flash Gordon, a sci-fi serial from his childhood. But he was denied the rights to the character, which left him no option but to craft a whole new script of his own.

He began drafting his second film’s script, The Journal of the Whills, a tale that referenced the Jedi. He proudly presented his groundbreaking concept to the studio, but was dismissed because of the story being “a little strange”. Nevertheless, Lucas firmly believed in his idea and decided to continue working on it.

RELATED: 3 Things You Need to Know About Rejection

Drawing inspiration from various sources over the years, Lucas gradually built his riveting space saga. From samurai tales to spaghetti westerns, his galaxy slowly began to take shape. With the help of his creative partner, Gary Kurtz, George set off to convince a different studio to finance his ambitious idea.

You can’t do it unless you can imagine it.

George and Gary knew that 1970s Hollywood had its own idea of sci-fi, where worlds were dark and stories were bleak. Star Wars, on the other hand, was created as a fun and colorful space escapade featuring robots, wookies, and lightsabers.

While current films portrayed the future with sleek suits and shiny tech, Star Wars favored used parts and rustic machinery. The pair was undoubtedly in for a hard sell.

Lucas’ idea was turned down repeatedly. Regardless, he continued to present his original concept to studio executives. But none of them were willing to take on such a “confusing” story.

The fun-loving space adventure boasting mythical characters and a princess was considered a “children’s movie,” which had no place outside of Disney. Except Disney didn’t want it either.

Lucas was disappointed, but not defeated. He just needed an extra hand to convey his vision — a difficult feat for a very shy introvert like himself. So he enlisted the artistic aid of Ralph McQuarry, who worked for Boeing but drew science-fiction in his spare time. Lucas spoke to McQuarry about the movie he wanted to make, and asked him to help studio executives better visualize his characters and landscapes.

Later that year, with the pre-production paintings in hand, George approached the head of 20th Century Fox, Alan Ladd Jr. By this time, in August of 1973, Lucas’ first movie, American Graffiti, had finally been released. Ladd Jr. had seen the movie and believed in the director’s potential. He glanced at the illustrations of C3PO, R2D2, and Darth Vader, then turned to Lucas and said, “I don’t understand this and I’m not investing in this project, but I think you have talent so I’m going to invest in ‘you’.”

That was enough for George. A deal was made and, a month later, he walked away with $50,000 to write a Star Wars screenplay.

Later that year, the self-described “terrible writer” started working on his first draft. He wrote for eight hours a day, five days a week. Over the years, he made re-writes of his re-writes, searching for the right ingredients and storyline to captivate the minds of younger generations.

By 1974, his draft had gone through countless drastic changes. Kurtz described the early versions as “gobbledygook.” The opening lines were convoluted, Han Solo was a large green monster and Anakin was a middle-aged general. With the help of a few friends, Lucas wrote two more drafts throughout the following year. He introduced “The Force” and created Chewbacca based on his dog. In 1976, the final draft of the screenplay was complete. Due to its length, George had divided it into nine parts, hoping someday he would get the funding to make sequels. He and his partner then approached 20th Century Fox to make a deal.

They proposed a budget of $18 million for the first movie, and George offered to take a $350,000 pay cut to keep the rights to any sequels. In the end, the filmmakers were given $7.5 million, and George was given the rights he wanted.

Regardless of the limited budget, George felt like he had finally made it. They took their funding and set out to begin filming.

In March of that same year, production began in Tunisia with a largely unknown cast and an uninspired crew. There was no visual effects department so Lucas created his own, which he called Industrial Light and Magic (ILM).

As the special effects got created in a California warehouse, the crew shot their scenes for Tatooine in the Tunisian desert. Not even a week had passed and filming had already fallen behind schedule due to malfunctioning props. Actors were being injured on set, equipment was breaking down, and none of the crew truly believed in the film. But George Lucas was undeterred and kept rolling.

It wasn’t long before a rare Tunisian rainstorm struck the country and disrupted filming once again. Lucas decided to move the production to a more controlled environment near London. He began to worry about his budget, as it was quickly drying out.

ILM struggled to create a year’s work of special effects within six months, and the film crew was forced to make do and recycle props from other sets. It was a difficult time for everyone involved, and George would often wonder if he should just leave and get “a real job.” But he had come much too far to quit.

Eventually, Lucas and Kurtz approached the studio to request additional funding. The already-delayed production was paused for two weeks, until the executives hastily complied with giving an extra $3.5 million. George was then told that production had to be wrapped within a week or it would be shut down. It wasn’t going to be easy, but he was going to find a way to make it happen.

You simply have to put one foot in front of the other and keep going. Put blinders on and plow right ahead.

Inspiring generations with his vision

With a deadline looming over his head, George Lucas rarely smiled anymore, as he was anxious to complete post-production. With the pressure from 20th Century Fox and the “disastrous” final edit of the film, George became so distressed that he was diagnosed with hypertension and exhaustion. Nevertheless, he maintained his focus and called for the aid of other editors, even asking his experienced wife to re-edit the final film.

On Wednesday, May 25th, 1977, Star Wars was released in only 32 theatres across America. To the surprise of everyone involved in the production (especially Lucas himself), it immediately broke box-office records. Critics were impressed and fans worldwide lined up to experience the awe-inspiring sci-fi movie that combined suspense and adventure with unprecedented special effects. In the end, the strange movie that no one believed in had grossed over $513 million worldwide, setting the stage for the sequels and launching the cast into stardom. It was named the greatest movie of its time and spawned a franchise that would marvel generations of fans for decades to come.

As for George Lucas, the once-struggling filmmaker became one of the worlds most renowned directors. A well-deserved position for the determined man who never let his audacious vision drown in the doubts of others.

As he brought his legendary space opera to life, George Lucas always followed his golden rule: Never lose focus. As he says so himself, if you’re pursuing something you’re truly passionate about, then no amount of naysayers and obstacles will stop you. His story is proof that, above all else, hard work and perseverance are all that really matter.

The secret is not to give up hope.