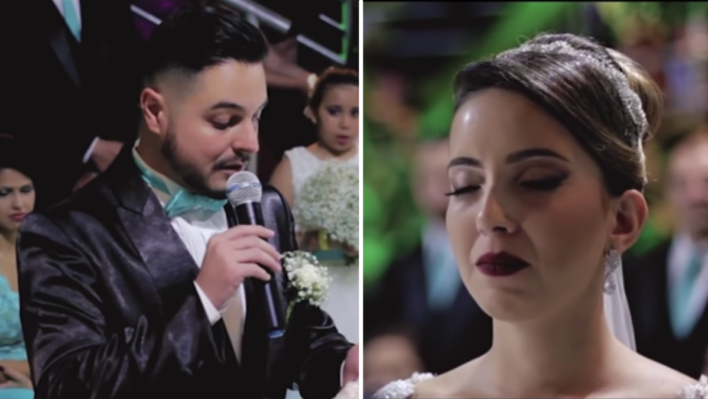 Groom Announces He Loves Someone Else at the Altar – Then, He Turns to Another Guest at the Wedding

The bride and wedding guests were in tears when Jefferson told his new wife Jessica he loved someone else.
By Sophie Tolias    November 6, 2022

The bride and wedding guests were in tears when Jefferson told his new wife Jessica he loved someone else.

As picture-perfect as every bride hopes her wedding will be, not everything always goes as planned. But thankfully, when Jefferson and Jessica stood at the altar and he sprung some news on her, it was a good surprise.

The Speech One Groom Gave at His Wedding

After the couple had exchanged vows, Jefferson confessed that he loved someone else and turned to a special guest present at the wedding.

Jessica began crying and guests were wondering what was going on, when Jefferson turned to Giovanna, Jessica’s daughter.

In a beautiful speech, he told the eight-year-old that he would not only be sharing his life with Jessica but with her, his new daughter, too.

He vowed to love, protect and care for her just as he had vowed to Jessica.

“If I could ask God anything, it would be to have you as my daughter. I would be the proudest father in the world to have such a beautiful, intelligent, and educated daughter like you,” he told Giovanna.

Giovanna smiled and she, along with all the guests, couldn’t hold back their tears.

“I also give you love, my love, to take care of you, to always protect you, and to not let anything bad happen to you,” he concluded.

RELATED: Controlling Cousin Disinvites Her From Wedding For Being Fat – She Hits Her With Mature Response

Giovanna took the mic from Jefferson and thanked him, accepting him as her new father and promising to love him.

It’s not easy to join as a blended family, but these three are off to the best of starts. And as for the wedding guests — they were left with a heartwarming moment they will not forget.