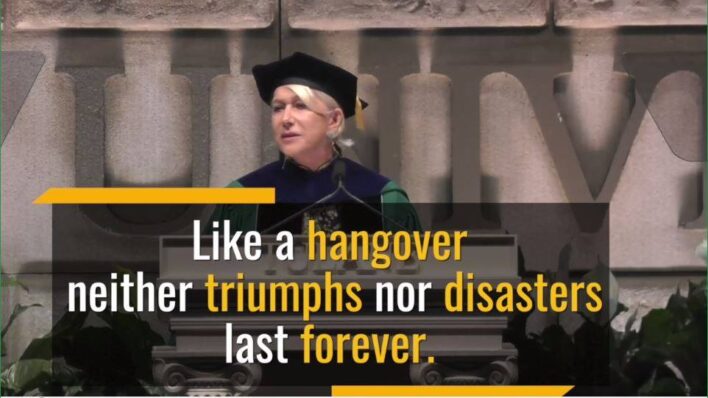 Helen Mirren – Give It Your All Helen Mirren gives a commencement speech at the university of Tulane and shares
By Goalcast    August 29, 2017

Helen Mirren – Give It Your All

Helen Mirren gives a commencement speech at the university of Tulane and shares her top five rules for a happy life.

Like a hangover, neither triumphs nor disasters last forever. They both pass and a new day arrives, so you just try to make that new day count. To help you along the way, I’m going to share a few rules that I’ve picked up during my life of disasters and triumphs. I call them, Helen’s Top Five Rules for a Happy Life.

Rule number one: don’t be in a rush to get married. I married my husband, Taylor, a lot later in my life and it’s worked out great. And always give your partner the freedom and support to achieve their ambitions.

Number two: treat people just like people. A long, long time ago, an actress friend of mine did the most simple thing and taught me a huge lesson. We were in the backseat of a car being driven to the location where we were filming and she was a smoker, in those prehistoric days when you could smoke in the car, and she got out her cigarettes, and before she lit up, she offered the driver one. So simple, but thoughtful. To her he wasn’t a driver-person, but a person-person. A person-person who might want to smoke. Today, she’d probably be arrested for attempted murder, but … That’s a lesson I never forgot and I’m grateful to my actress friend to this day, so remember that every single person, whether they have dominion over your life or not, deserves equal respect and generosity.

Number four: don’t be afraid of fear. These words bring me back to my high school and our head mistress, and she said these words to me the moment I walked into her office as a trembling 11-year-old about to enter high school. I’ll never forget the words of that head mistress. She said, “Don’t be afraid of fear.” I think what she meant was don’t let fear rule you. Now, sometimes, it’s wise to be afraid, like when you’re about to take a dive into a pool with not enough water in it, or drive drunk. Moments like that, be afraid, be very afraid and absolutely do not do it. But for the moments when you’re challenged by other fears like, “Oh, am I good enough? Am I smart enough? Will I fail?” Throw caution to the winds, look fear straight away in its ugly face and barge forward. When you get past it, turn around, give it a good swift kick in the ass.

Rule number five for a happy life: don’t overcomplicate things. You can navigate each day just by following some very practical advice that I’m going to give you right now, a few dos and don’ts, okay? Don’t put hot cups on waxed wooden surfaces. In fact, don’t wax wooden surfaces. As Cawley said, “Don’t procrastinate.” Do say thank you when it’s merited. Don’t procrastinate, especially when saying, “Thank you,” when it’s merited. Don’t lose your sense of humor, I know I’m safe with that one, because you’re here, you’re in Tulane, you guys have got a sense of humor. Do confront bullies, don’t procrastinate. Do open your heart to love. Don’t confuse sex with love. Love generally lasts longer than two minutes. Don’t smoke tobacco or chew it, and I’m going to say it again, don’t dive into water if you don’t know how deep it is. One more thing, listen to your instinct. Grab the opportunity when it presents itself and then give it your all.