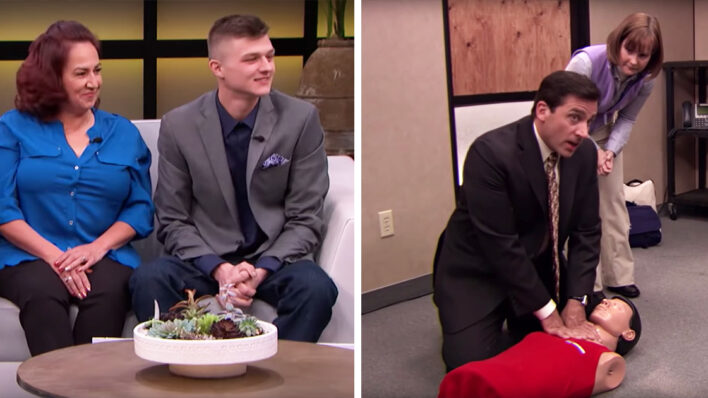 Hero of the Week: He Saved a Woman’s Life With a CPR Joke From The Office

The Office‘s Michael Scott and Dwight Schrute are two of the most often referenced characters in TV history, spawning countless
By Eliza Theiss    June 3, 2019

The Office‘s Michael Scott and Dwight Schrute are two of the most often referenced characters in TV history, spawning countless

The Office‘s Michael Scott and Dwight Schrute are two of the most often referenced characters in TV history, spawning countless memes. Even years after cult hit series has ended, the exploits of Dunder Mifflin employees are still very much relevant to fans. And for two people, The Office expertise was the difference between life and death.

Cross Scott was cruising around Tucson, test-driving a customer’s car from the auto shop where he works, w when he saw a woman slumped behind her wheel. The car was in a dirt pull-off with its hazard lights on, as the Arizona Daily Star reported.

The 21-year-old shop technician immediately stopped and jumped into action. The woman’s car was still in motion, rolling gently. Scott blocked the front wheel of her car with a big rock and went to the window.

The woman was unresponsive, and her lips had turned blue. Scott started banging on her window, shouting — but she didn’t react. Scott didn’t have his phone; he never takes it with him when he’s out test-driving cars, because he doesn’t want any distractions while working on the road. Luckily, two passersby stopped and were able to call 911, but help was still minutes away. So, Scott broke a back window with a rock, opened her car, and got in. He checked for a pulse and couldn’t feel one.

Scott knew he needed to give her CPR, but he’d never trained for it.

And then suddenly he remembered an episode from The Office where Steve Carell’s character performs CPR on a test dummy to the rhythm of Bee Gees’ “Stayin’ Alive”.

He crawled on top of the unconscious woman and started giving her chest compressions while singing “Stayin’ Alive” out loud. A minute later, the woman finally breathed in and then threw up.

By the time emergency services arrived, Scott had been on the scene for 10 minutes. The woman, later identified as Carla, was taken to the hospital and discharged later that day. According to paramedics, those 10 minutes between receiving the emergency call and arriving were critical.

If Scott hadn’t given her chest compressions, the outcome would have been very different.

As it turns out, Carla had called her daughter when she started feeling ill and had passed out with her daughter on the line. The daughter had heard everything: her mother passing out, Scott breaking into the car, the CPR. She managed to arrive on the scene before paramedics took her mother to the hospital.

Scott’s actions vent viral, drawing national media attention and many interview requests. But Scott turned them all down, and waved away friends’ and strangers’ congratulations on his heroism.

He told the Arizona Daily Star, that he just did what anyone else in his situation would have done. Besides, according to Scott, the real heroes are emergency personnel who go out and save lives every day.

But Scott did accept one interview request, months later, for Steve Harvey’s talk show. Not for fame, but to meet Carla, who also appeared with her daughter. “I’m always going to be thankful for what you did,” she told him.

For Scott, that’s the only thank you he needed – he’d lost his mom to cancer 5 years ago. He quit school to help his family financially and help raise his sister who was only 9 at the time. His big regret is not finishing school. Scott still dreams of an education, going back to school, and maybe studying engineering. And he’s definitely interested in getting a formal CPR training.

“Stayin’ Alive” is actually a perfect song to perform CPR to.

At 106 beats per minute, it’s in the ideal range of 100 to 120 beats that is needed for effective chest compressions. It’s one of the songs that New York – Presbyterian Hospital included in their Songs to do CPR to Spotify playlist.

Other potentially lifesaving beats? Justin Timberlake’s “Rock Your Body”, Lynard Skynard’s “Sweet Home Alabama”, Missy Elliot’s “Work It”, and Gloria Gaynor’s “I Will Survive”. While CPR training is the important first step in performing CPR, these songs could help save lives too!