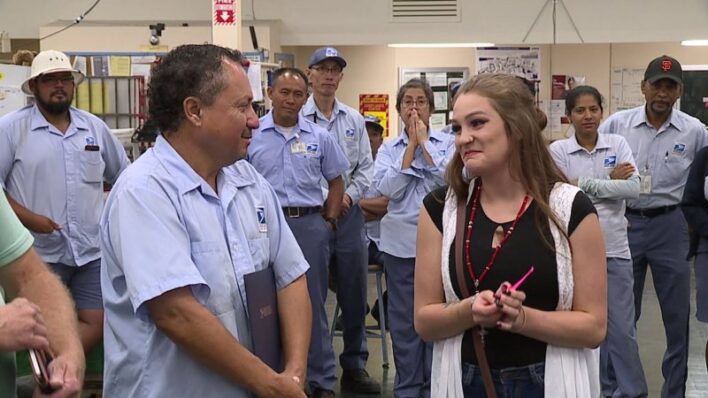 Human trafficking is a huge problem right now, and it’s a problem going on across the world. While what’s happening
By Aly Walansky    August 8, 2018

Human trafficking is a huge problem right now, and it’s a problem going on across the world. While what’s happening to these young people is awful, it may seem easier to just look away if you see something or someone that looks suspicious.

The people who don’t look the other way, who take a step to make a difference, can and do have a powerful impact and save multiple lives.

Thank you Ivan Crisostomo for your public service and dad intuition to save this young human trafficking victim.https://t.co/8AvErDkgOB

A recent example is a California teen who was rescued by a hero postal carrier. Crystal Allen is just 16 years old and says she was kidnapped and held captive in a world of sex trafficking in Sacramento, she explained in an interview with CBS.

Everything changed when postal carrier Ivan Crisostomo heard her crying while on his mail route last month.  “I hear this crying, this desperate crying,“ he said in the CBS interview. ”I saw her hiding behind this kind of bush, kind of tree.”

Crisostomo found Allen hiding behind a tree crying, and she told him she feared people would be “coming to get” her, she had apparently escaped from her captors by jumping out of a car prior to Crisostomo finding her.  “Don’t worry, nobody’s going to take you, I’m here for you,”  Crisostomo said he told the teenager.

With Crisostomo’s help, the girl was able to call home to her family, and then he stayed with her until police officers arrived.

Allen recently was able to see Crisostomo again, and was excited to be able to thank him in person for having saved her.

“Ivan himself is a hero for saving me,” she said. “Even if he doesn’t think it!”

“What Ivan did was wonderful, he stepped up where a lot of people would have just continued driving down the road and he made a huge positive impact in this young girl’s life,” said David Cuneo of the city’s sheriff’s department.

Let this be a lesson for your own life. If you see someone suffering or in danger, don’t keep walking. Don’t assume it’s none of your business, or someone else will help them. Take that moment to stop, turn around, and see what you can do to help. It may just save someone’s life.