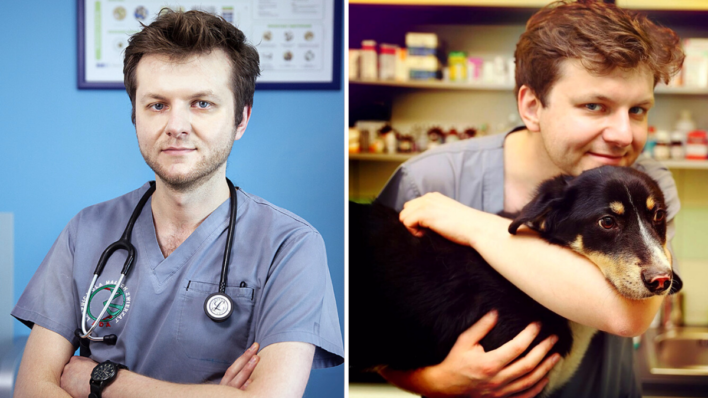 One heroic vet and his team drive back and forth over the Ukrainian border to rescue animals trapped in the crossfire of the Russian invasion.
By Sophie Tolias    April 5, 2022

One heroic vet and his team drive back and forth over the Ukrainian border to rescue animals trapped in the crossfire of the Russian invasion.

Jakub Kotowicz, 32, and his team have rescued 200 cats and 60 dogs from Lviv in three convoys- including a dog with a bullet lodged in her spine and a pygmy goat with diseased legs.

During the latest convoy, Kotowicz travelled into the war-zone from Przemyśl, on the Polish border, and returned after not sleeping for five days straight.

“There were three cars and eight people in this one. We came back about 2 am or 3 am on Tuesday and had to check all the animals in four to six hours, then go to sleep for two hours.”

The route is extremely dangerous and many of the animals have been so badly injured in conflict, they had to be put down.

We are preparing the animals for an adoption process. Sometimes the animals which are in very poor condition will be with us for two or three months.

Many of the strays will be rehomed across Europe, and a couple of cats have already been reunited with their Ukrainian owners.

Jakub founded the rescue, the ADA Foundation, when he was 17 years old and runs the non-profit solely on donations.

The ADA Rescue Foundation Has Helped Over 260 Animals

Staff at the centre are currently getting a wheelchair for a dog named Vira, aged seven, who has a bullet lodged in her spine. And Jakub plans to keep the two-month-old pygmy goat, named Sasha, who was rescued from Lviv, as the organization’s pet.

Sasha came to us from the first convoy to Lviv, an old woman asked us to have her. She has diseased legs.

The ADA Foundation has an innovative facility for rehoming pooches, a ‘dog village’, where they can get used to furniture such as sofas and tables, while being monitored by prospective owners.

The rescue plans to buy another ambulance and covert a pizza shop into a place for rescued animals to be kept, as well as packing a warehouse with supplies. Volunteers have come from as far away as Denmark, Canada, and the US.

Nick Tadd, a wildlife photographer, travelled out to Przemyśl to volunteer at the ADA Foundation. The 55-year-old has raised £60,000 so far to help with the rescue’s missions.

“I’m just a helping hand really,” he said, “The animals have got PTSD.”

They say a dog is a man’s best friend. Jakub and his team are returning the unconditional love and loyalty we get from our furry friends. And you can do the same wherever you are. The difference between life and death can be you: Adopt, rescue, foster, transport, sponsor, donate, volunteer, and educate.

be kind to animals
“To my mind, the life of a lamb is no less precious than that of a human being.” – Mahatma Gandhi
Tags
Share
← Prev Post Next Post →