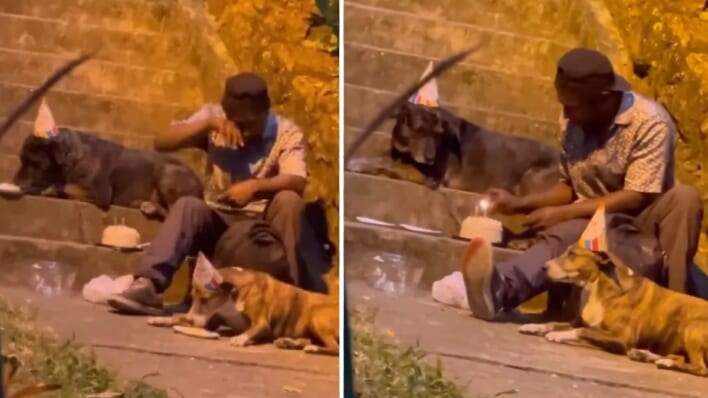 When a passerby filmed and shared a sweet moment between Choko José Luis Matos and his dogs, it was the spark of a big change.
By Sophie Tolias    September 15, 2022

When a passerby filmed and shared a sweet moment between Choko José Luis Matos and his dogs, it was the spark of a big change.

Human beings are not just judged by the way we treat each other, but by the way we treat any creature that is powerless. One homeless man touched the hearts of his neighbors when they saw the way he was treating a group of stray dogs. What happened next is nothing short of remarkable.

Choko José Luis Matos was living on the streets in Bucaramanga, Colombia when a stranger noticed him at a local park. The passerby was so touched by what he saw, he filmed it.

The bystander saw Choko sitting on some concrete steps with two dogs wearing party hats. Choko pulled a small cake out of a plastic bag. He clapped his hands, sang happy birthday and pet his beloved companions. He lit two candles on the cake while his dogs observed him, and he gave them each a kiss on the cheek.

He then gave a slice of cake to each of his dogs on paper plates. As they ate together, Choko wiped tears from his eyes and pet his dogs some more.

After witnessing the sweet birthday party, the bystander walked up to Choko and asked him about his dogs. He learned that Choko had two dogs, Shaggy and Nena, and that they were celebrating Shaggy’s birthday.

RELATED: Police Officers Notice Homeless Mom Living With Her Kids Behind Walmart – What They Do Next Brings Her to Tears

He learned Choko had escaped an abusive home and had been living on the streets for the past several years. Shaggy and Nena were his only family and, even while he was homeless, Choko did everything he could to take care of them.

“My dog was celebrating his birthday,” Choko José Luis Matos said, “and I wanted to give him a quarter of a chicken, but I didn’t have enough for that. But I saw a lady who was going to throw away a cake and I told her to give it to me. She handed it to me saying: ‘Take it, son, you make better use of it than I do.’”

Wanting to help, the kind bystander shared the video of Shaggy’s birthday party on social media and asked his friends if they could donate extra food or supplies and drop them off at the park. The video went viral and the park became a gathering place for animal lovers.

Someone gave him a phone and encouraged him to setup his own Instagram page. He did, and today Choko has more than 175,000 followers.

Now That He’s Housed, Choko’s Mission Is to Do the Same for Stray Dogs

Neighbors helped Choko find a place to live with Shaggy and Nena, completely transforming his life. Choko now has friends at a local church, and he spends his time volunteering and helping rescue animals living on the streets. His dream is to be able to use his voice to help save and rescue homeless dogs.

“In so many years living on the street I was never alone,” Matos explained. “My dogs were always there to bring joy to many sad days, and now together we are going to help many who need us! I hope to be able to make foundations for little animals all over the world.”

It’s incredible to see kindness beget more kindness. Choco’s compassion for his dogs touched the lives of his neighbors, who subsequently changed his life. And now, he’s using his new stability to pay this energy forward. There’s nothing stronger than love, and Choco really is a dog’s best friend.