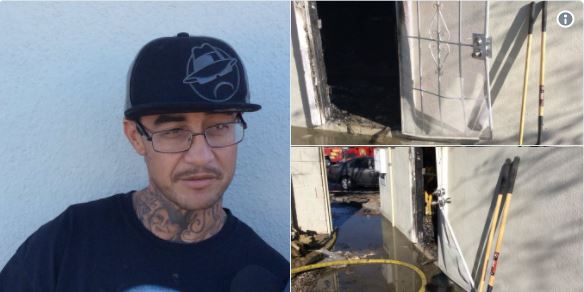 Two small children, 10 mons & 3 yrs were rescued from a burning apt by a homeless man who jumped
By Eliza Theiss    December 6, 2017

Two small children, 10 mons & 3 yrs were rescued from a burning apt by a homeless man who jumped

Two small children, 10 mons & 3 yrs were rescued from a burning apt by a homeless man who jumped a locked gate, then pulled a dead-bolt locked security door open to safety. Both kids will be okay. The man is a TRUE HERO. pic.twitter.com/jImwAklmcB

In the late morning hours of Friday, two small children were being watched by their grandfather in Las Vegas’ east valley. The grandfather was cooking food on the stove, but while he stepped into a back room, the cooking grease caught fire and rapidly spread through the kitchen. The kids started screaming, but the inferno quickly enveloped the kitchen and living room, preventing the grandfather from reaching them.

As smoke started billowing from the Mesquite Avenue apartment building, 36-year-old Anival Angulo, one of Las Vegas’ many homeless individuals, was walking down the street. He saw the ominous plume and heard children screaming. Not hesitating for even a second, he ran towards the danger. Reaching the blazing home, he saw a toddler crying behind a locked security door. What happened next is truly inspiring.

Angulo jumped the property’s fence and rushed to the door. A 3-year-old girl was standing there, unable to open the steel door. Angulo threw all his strength at the locked door, pulling on it with his bare hands until the deadbolt unlatched. According to local media reports, the toddler ran to Angulo and wrapped her arms around him.

But Angulo’s story didn’t end here. As the little girl ran to him, he noticed the small leg of an infant. Realizing there was a baby still inside the blazing building, he ran in, wrapped the 3-month-old up, and ran out with him to safety. Other bystanders helped the grandfather to safety through a window on another side of the apartment.

Although Las Vegas Fire & Rescue reached the property within minutes, the children were already safe, thanks to Angulo’s selfless act. According to fire officials, without Angulo’s heroism, the children would have most likely suffered severe injuries or even death, as the blaze grew into an inferno within minutes. The children are both alright, although they were briefly treated for smoke inhalation at a local hospital.  The fire was so intense, that within minutes the home was severely damaged by the fire and is now unlivable, despite the firefighters’ quick response.