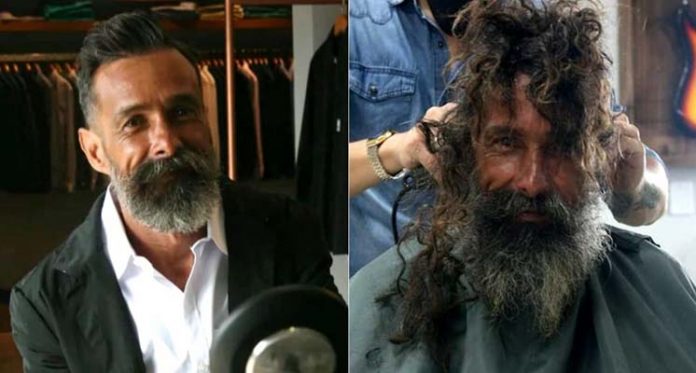 One Brazilian salon’s generous act gave a homeless man a new look and a family a brother they thought lost.
By Bryan Liquor    December 30, 2020

One Brazilian salon’s generous act gave a homeless man a new look and a family a brother they thought lost.

45-year-old João Coelho Guimarães of Goiânia, Brazil was a regular at Padoo Saloon, but not the kind you’d expect.

One day, he walked in with a surprising request. Instead of money or food, could anyone spare a razor to trim his beard?

“The whole team was moved by the situation”, recalls Alessandro Lobo, the shop’s owner. He decided to go a step beyond: They’d give João a full makeover.

“everyone who was at the store decided to help him in a different way, providing him with a day of beauty.”

Along with a beard trim and haircut, they dressed him to the nines from head to toe. Two hours later, he was unrecognizable. For the first time in years, you could see his smile.

Alessandro shared the entire transformation on the shop’s social media pages to remind everyone “how much we need each other.”

“The whole team volunteered and everyone did a little, adding up to a surprising result.”

João was quiet about his background and Alessandro’s team didn’t ask any questions.

Nevertheless, they were about to find out more about their new friend.

His family had feared the worst

When the video went viral, Alessandro received a surprising message through social media.

The message was from Maria Coehlo, João’s sister. It turns out that his family thought he’d been dead for 10 years!

When she and his mother saw him on online, they immediately recognized him and contacted Alessandro at the Padoo Saloon.

Padoo Saloon cameras captured Maria hugging her brother for the first time in a decade. João broke down in tears.

“2020 was a year of many losses for loved ones around the world, and in the midst of all that, this family got a moment of warmth.”

Maria offered to take João back home, yet he surprisingly declined, saying that on the streets “he feels free”.

“He is a very shy person and of few words. But we noticed his look of satisfaction and he thanked us very much”, said Alessandro.

João might still live in the streets, and Maria might not have her brother home. However, today they can both sleep more easily knowing they’re not alone.

None of that would be possible if not for the strangers who welcomed João into their salon and treated him like family. The result was an unexpected chain reaction that brought a broken family together.

It proves that you just never know how far a good deed will go.