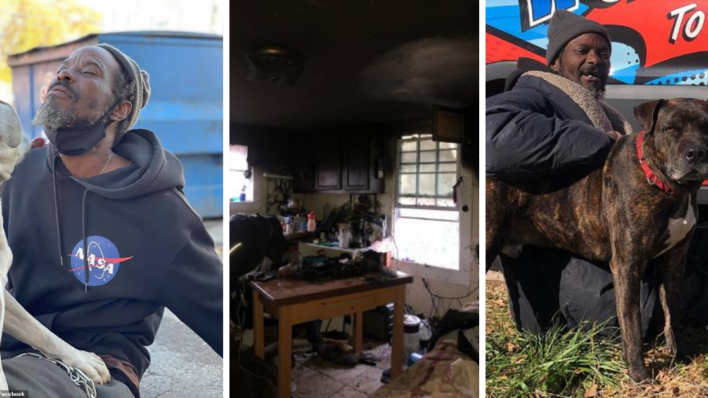 Dogs are often known as man’s best friend – but in one beautiful instance, a man ended up being a
By Aly Walansky    December 28, 2020

Dogs are often known as man’s best friend – but in one beautiful instance, a man ended up being a best friend to a bunch of pets in need after a dangerous situation nearly became tragic.

Keith Walker, an Atlanta-based homeless man, could have ran in the other direction when he saw local animal shelter W-Underdogs on fire. But he ran towards the fire instead, risking his life to save all the animals trapped inside.

His faith was bigger than his fear

“I was nervous as hell, I’m not going to lie. I was really scared to go in there with all that smoke. But God put me there to save those animals,” Walker told CNN.

“If you love a dog, you can love anyone in the world. My dog is my best friend, and I wouldn’t be here without him, so I knew I had to save all those other dogs.”

The shelter is currently too damaged to safely inhabit the dogs, says founder Gracie Hamlin, but all the animals have already been safely moved to another facility that the shelter was actually already planning on relocating to.

“He is my guardian angel,” Hamlin told CNN.

“Even the firefighters didn’t want to handle the dogs. They called animal control, but Keith was already in the building pulling out the cats and dogs until they were all safe.”

Hamlin and Walker had already known each other because Walker, who has been homeless since he was 13, keeps his own dog dog, a pitbull named Bravo, at the shelter every night.

In fact, Walker came across the fire when he was on his way to pick up Bravo to take him for a walk. And that was how he was able to rescue all the animals — 6 dogs and 10 cats.

“I can’t thank him enough for saving my animals,” Hamlin said. “I’m still in disbelief, because I’ve been around a fire and I know how fast they flare up. He is my hero.”

A lesson in humility

Before you look down on a homeless person, remember that they are people just like you — and some of them are incredible, brave, good-hearted humans.

Walker could have looked the other way, especially considering the fact he’s lived a hard life and 2020 hasn’t been easy on anyone. But he decided to put his own well-being aside to save 16 innocent animals, and that is a lesson in humility for all of us.