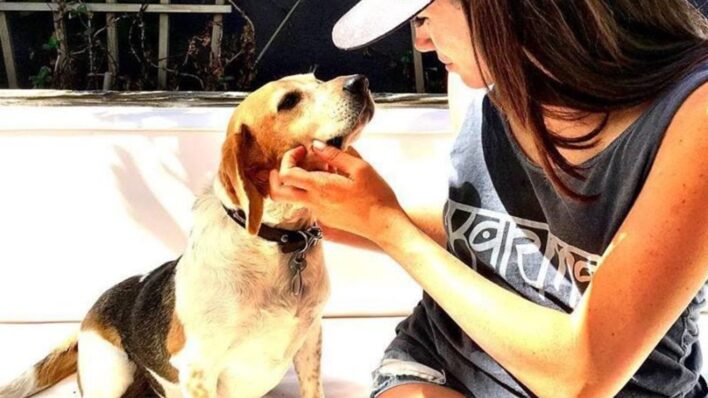 The Story of Meghan Markle’s Rescue Beagle Is a Reminder That Even at Our Lowest Point, We Can Still Live Beyond Our Wildest Dreams

It wasn’t so long ago that beagle pup Guy Markle was on death row at a high-kill Kentucky shelter, just
By Aly Walansky    April 1, 2019

It wasn’t so long ago that beagle pup Guy Markle was on death row at a high-kill Kentucky shelter, just

It wasn’t so long ago that beagle pup Guy Markle was on death row at a high-kill Kentucky shelter, just on the verge of being euthanized.

Everything seemed hopeless (this was only three years ago) and so far no adoption prospects were working out. He was already three years old, and that meant he wasn’t a puppy — and most people didn’t want to adopt him.

But then everything changed one beautiful day when a little known actress named Meghan Markle adopted Guy 2015 after meeting him at an adoption event at a pet store in Ontario, Canada.

RELATED: 15 Meghan Markle Quotes on Being Real and Kind

Then in 2015, according to Get Leashed, a team of volunteers started an effort that ultimately got Guy to Canada. Each volunteer participated in one or two hour segment of the trip, where Guy from car to car and stranger to stranger until he arrived at A Dog’s Dream Rescue.

It was just a confluence of perfect timing: A Dog’s Dream Rescue removed him from the high-kill shelter that week, and he arrived in time for the event, where he met his new mom.

“He was just sitting there with those big beagle sad eyes, looking so depressed,”  Dolores Doherty, founder of the rescue, told The Guardian. “He was irresistible.”

Meghan Markle took Guy home, where he soon became the star of her (no longer active) Instagram account. Guy’s life had changed in a big way. But little did he know, it was about to get EVEN BETTER.

The next year, Guy’s mom met a prince, and one day, the prince proposed. Then, Guy’s mom took him with her when she moved to England to marry the prince.

Since then, things have only gotten better and Guy made all sorts of new friends. In fact, he was photographed riding to his mom and new dad’s wedding at Windsor castle with the Queen of England.

Not too shabby! In just a few short years, Guy went from death row to the home of a prince, car pooling with the Queen! Let that be a message to us all. No matter how low things seem, tomorrow could be brighter than we ever imagined.