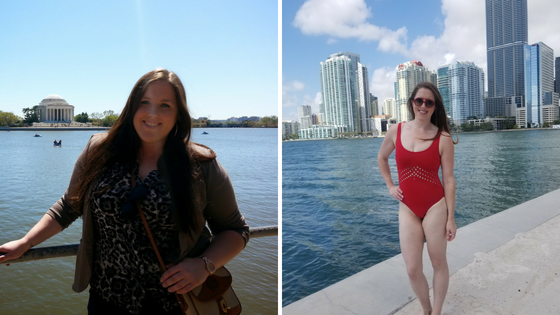 At 25, Lauren Council weighed 270 pounds and resigned to being overweight for the rest of her life.

“I was hopeless and could not understand why I could not find the motivation to change my lifestyle,” she said. “I was afraid I would never have that wake up call to finally do something about it.”

That was until April of last year, when Council went to urgent care after having been up all night sick and with terrible stomach pain. After undergoing a series of tests, she was diagnosed with IBS, or irritable bowel syndrome, and the news propelled her on an incredible transformation journey.

Up until her official diagnosis, Council had already lost 20 pounds from being so sick. In addition to losing weight and improving her health, she now had to learn to manage IBS symptoms.

She began by making changes to her diet, cutting out gluten and dairy, which both triggered her symptoms.

She had to shift her mindset and build a new relationship with food.

“I knew if I wanted to be successful, I could not go back to my old ways here and there as I was afraid that it would spiral out of control so I stuck to a clean, whole foods, healthy diet,” she said.

In a matter of weeks, Council got a gym membership.

“In my 25 years, I could count on both hands how many times I had done a real workout,” said Council. “I had avoided physical activities for years because I was embarrassed by how out of shape I was.”

It wasn’t long before going to the gym became a regular part of her routine and was something that she looked forward to.

How Losing Her Mom Motivated Her

At the time, Council challenged herself to lose 70 pounds by her 27th birthday.

“I chose that day because it was when I would need to start having mammograms as I am at high risk of breast cancer,” she said.

Her mother was diagnosed with breast cancer at the age of 37. She passed away from metastatic breast cancer 10 years later, one week prior to Council’s high school graduation.

Being obese added to her high risk of developing cancer and this awareness kept her going whenever she got discouraged.

“My IBS was the wake-up call I needed to start my journey, but losing my mom to breast cancer was the motivation to truly commit to this journey and healthy lifestyle.”

She reached her initial goal nine months early and decided to keep going. By early 2018, Council lost a total of 100 pounds.

“I thought losing the weight would be the hardest part, but maintaining it is an even bigger challenge that I deal with on a daily basis,” she said.

“It is not a race, it is a journey–not only do I look and feel better, but I discovered I have so much more discipline than I ever would have thought.”

Being open and transparent about her journey on social media is what’s held her accountable, and she hopes to help others feel like they are not alone in facing challenges when it comes to their health and dieting.

“My entire life, I have let my weight hold me back, she said. “This weight loss journey has been the hardest, but best decision I’ve ever made.”

“I never realized life could be this good.”