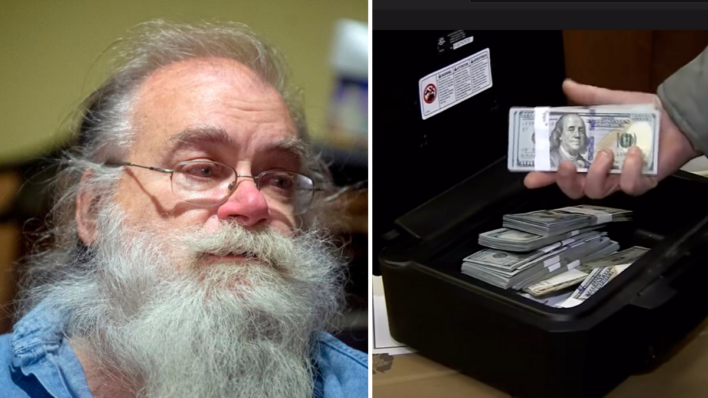 ‘Unlucky’ Man Finds $43k in His Couch – Instead of Keeping it, He Does the Unexpected

One man in Ovid, Michigan wanted the money he found to go back to who it came from.
By Lindsey Staub    March 16, 2022

One man in Ovid, Michigan wanted the money he found to go back to who it came from.

Howard Kirby knows what it’s like to be down and out. Within a few years, Howard went through a divorce, lost a cousin to cancer, and had a kidney removed. Soon after, Howard’s eldest son lost his job and needed to move into Howard’s place with his wife and pets.

However, as Howard now knows, luck is a tricky thing that can bounce back up as quickly as it falls.

Why a Thrift Store Couch Contained More Than Just Stuffing

In the house he now shares with his son Ben and daughter-in-law Diane, Howard had a couch he bought from a thrift store. The couch was particularly uncomfortable, leading Diane to open up one of the cushions to investigate what was inside. That’s when Diane discovered two envelopes filled with money, $43,000 in cash to be exact.

Like Howard’s luck, his next step was unpredictable. Instead of using the money for home repairs or other necessities, Howard wanted to give it back.

“Being a born-again Christian, Christ in me is the one that actually gave the money back,” Howard told MLive. “Remember the bracelets, WWJD? Well, that’s what Jesus would do.”

Howard contacted the thrift store that had sold him the couch who then got in touch with the family that donated it. That’s when Howard returned the money to them.

The couch had belonged to the grandfather of the family, and he had passed away long before Howard found the money. They were so grateful for Howard’s kind act, they took him out to dinner to thank him.

There is so much thankfulness, it boggles my mind sometimes what is happening for me. I’m just amazed by it.

Word of Howard’s honesty spread quickly and inspired many. Awed by his kindness, others wanted to help Howard, who was in need himself. One of the many people was John Conversa, the branch manager of a roofing supply store called Eikenhout Saginaw. John offered to help cover some of Howard’s roof repairs.

“We’re not doing it so much for a PR thing, we want to promote these kind of actions that he did,” John said. “There’s not very many people nowadays who are upstanding like that. It’s a good thing for our employees to see that.”

Another inspired person was Jay Tyrell, who decided what Howard needed was a GoFundMe. The donation page ended up raising $16,000 for Howard. “It shows that there’s still good people out there. It’s been very inspiring,” Jay told MLive.

I hope that his actions will have other people kind of look at their own lives and think about how they can be better members of society.

Refusing to take any credit, Howard attributes his action to his faith.

“I don’t know how to say it, I’m blessed. I’m blessed beyond words. I have had so much peace, so much joy because I did do it, that $43,000 never could buy that much joy or peace or happiness.”

Howard’s Selflessness Brought Him Joy and Peace He Never Expected

In a pure act of selflessness, Howard returned the significant sum of money he found in his possession. Inspired by his action, people around the world gave back to him.

Howard set off a string of chain reactions, with people passing kindness forward. If we all look out for one another, someone will look out for us, and the world will be that much better.