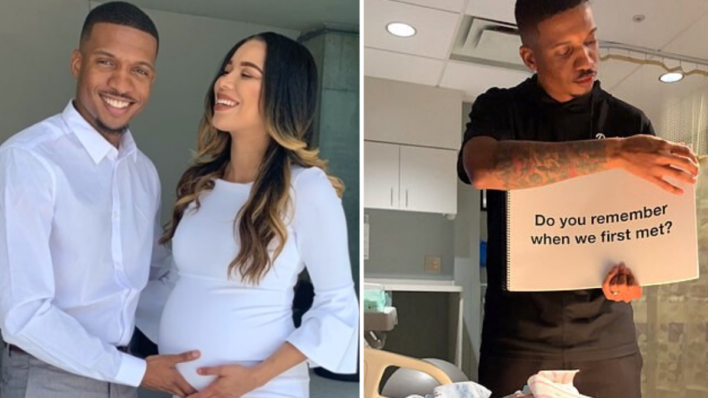 With a worried wife, one thoughtful husband went the extra mile to show why marriage is truly a labor of love.
By Bryan Liquor    May 31, 2022

With a worried wife, one thoughtful husband went the extra mile to show why marriage is truly a labor of love.

Miscarriages devastate marriages, with couples 22% more likely to break up, according to one study. Jasmin and Kendall Caver, who also went through a miscarriage, were unfortunately no different, and their 10-year union was tested like nothing they had ever faced before.

RELATED: Pregnant Woman Goes Into Labor In Uber On The Way To The Hospital – Driver Has A Surprising Response

Speaking with Good Morning Britain, husband Kendall said the biggest test was when his pregnant wife Jasmin neared her due date. Still obviously — and understandably — shaken from their previous loss, Jasmin was vulnerable and afraid.

“A couple of weeks prior to her due date, she touched me and said, ‘Hey babe, I need to talk to you,'” he recalled. “She said, ‘I’m really nervous, I’m about to go into labor, I don’t know how the experience is gonna be. I just need some words of encouragement.'”

How a Caring Husband Supported His Wife during Her Labor

While Kendall had the motivation, confidence was another story. “At the time I had none, I’m like ‘I don’t know what to say, I’m a guy!’”

Yet when the big day came, this husband would blow away his wife with a gesture that moved her and millions more.

In a heartwarming video, Jasmin’s husband is by her bedside, and he’s not empty-handed.

He proceeded to flip through a booklet with words of encouragement, from how they met to what they had overcome together over the last 10 years. “You are the most breathtaking, fearless, wonderfully made woman I know.”

The video has over 2 million views and 53,000 shares. However, only one tally mattered, as the couple welcomed their beautiful baby girl, Sofia Isabel Caver, to the world.

Jasmin, now a beaming mother, was totally taken by her husband’s actions.

It reminded me of how far we’d come in our journey, and it took my mind off of everything that was going on, so I really appreciate that he took the time out to do something like that for me.

How One Husband Proved Marriage Is a Labor of Love

Meanwhile, the proud father said that nothing is too much for his wife, given what she’s been through.

“I don’t mind being mushy and doing the corny stuff here and there because she deserves it. This was her body, she had the miscarriage, she went through that, I didn’t,” Kendall said.

Among quotes about relationships, one reads “Being deeply loved by someone gives you strength, while loving someone deeply gives you courage.”

Who can imagine all the tears and tension this couple went through at their lowest point? Yet when they needed each other most, they were right there with open arms.

Their story reminds us that true love is not measured by how a couple embraces the good times, but by how they overcome the bad.

be someone’s cheerleader
“Being deeply loved by someone gives you strength, while loving someone deeply gives you courage.” – Lao Tzu
Tags
Share
← Prev Post Next Post →