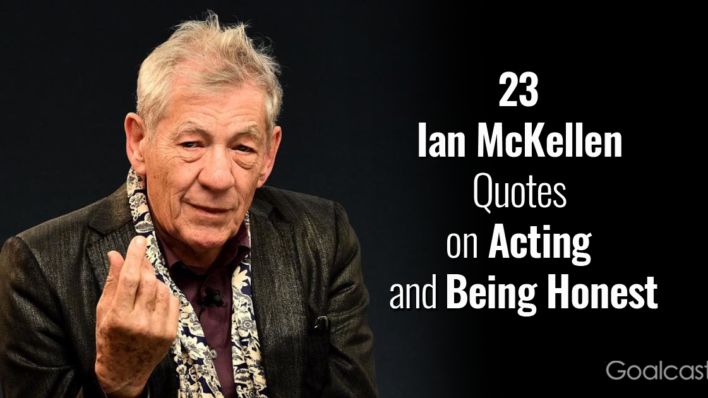 23 Ian McKellen Quotes on Acting and Being Honest

Sir Ian McKellen is so much more than Gandalf and Magneto. These quotes prove he is just as cool in real life as he is on stage.
By Flavia Medrut    August 19, 2019

Sir Ian McKellen is so much more than Gandalf and Magneto. These quotes prove he is just as cool in real life as he is on stage.

Sir Ian McKellen is so much more than Gandalf and Magneto, although many of us still like to name him by his most renowned characters.

The British actor who has such a lengthy and impressive career faced his first life tragedy at the age of 12, when his mother died of breast cancer. McKellen had barely gotten his degree in English literature when his father also passed away.

His parents had always supported McKellen’s interest in acting, so by the time he graduated, he already had some solid performance experience. The grief over the loss of his parents at such a young age didn’t stop McKellen from working hard to achieve his dream.

After becoming a legend of British theater, he started acting in movies. Believe it or not, McKellen rejected the role of X-Men‘s Magneto at first, but he changed his mind after seeing the character’s awesome suit. That first collaboration with Sir Patrick Stewart has led to a multi-decade friendship and multiple collaborations, including his officiating Stewart’s wedding.

When it comes to the role played in The Lord of the Rings, any comment would be superfluous as his performance as Gandalf was impeccable.

He is not just a brilliant and beloved actor — McKellen also dedicates his spare time fighting for the rights of the LGBT community and gets involved in various other charities.

Here are 23 Ian McKellen quotes on acting and honesty:

Try and understand what part you have to play in the world in which you live. There’s more to life than you know and it’s all happening out there. Discover what part you can play and then go for it.

To know you are in the company with people who love and care for each other, as well as for whatever they are working on, is almost essential.

I’m dead against the idea that you should try to “cure” people of being gay.

Be honest with each other. Admit there are limitless possibilities in relationships, and love as many people as you can in whatever way you want, and get rid of your inhibitions, and we’ll all be happy.

One of the few lessons I have learnt from studying people who do terrible things is that they are all too human. And that we are all capable of doing almost anything.

Personally, coming out was one of the most important things I’ve ever done, lifting from my shoulders the millstone of lies that I hadn’t even realized I was carrying.

Splendid architecture, the love of your life, an old friend… they can all go drifting by unseen if you’re not careful.

It may be my rather puritanical upbringing at odds with my inborn laziness that makes me feel guilty at the end of the day, unless I am able to point at some achievement.

Acting is no longer about lying. It’s now about revealing the truth. People are at ease with me now. Honesty is the best policy.

Godot is whatever it is in life that you are waiting for: ‘I’m waiting to win the lottery. I’m waiting to fall in love’. For me, as a child, it was Christmas. At least that eventually came.

I tend to discourage people from calling me ‘Sir Ian,’ because I don’t like being separated out from the rest of the population. Of course, it can be useful if you’re writing an official letter, like trying to get a visa or something passed through Parliament. They’re impressed by these things.

I often thought my gravestone would say, ‘Here lies Gandalf. He came out.’

When you were on stage, you could be absolutely open about your emotions and indulge them and express yourself in a way that – in real life – I wasn’t doing.

It was wrongly assumed that I wished to become some sort of leader among gay activists, whereas in reality I was happier to be a foot soldier.

Success in the movies has pushed me to places I didn’t know I was allowed to go.

In any human rights campaign, everybody must do what they can.

I think the point to be understood is that we’re all different. I’ve never been a fan of theories of acting. I didn’t go to drama school, so I was never put through a training that was limited by someone saying, ‘This is the way you should act.’

My acting stopped being about disguise and became about truth, which suits the camera, so my film career took off when I came out.

I’m not quite as cool as I would like to be, really.

I can’t take on all the worries of the world, you know. I can only talk about being gay and being an actor. I’ll have to leave those other battles to somebody else.

I think I’ve become more modest as the years have gone on.

What’s upsetting about an autobiography is that the final chapter is always missing. I mean, you want the death, don’t you?