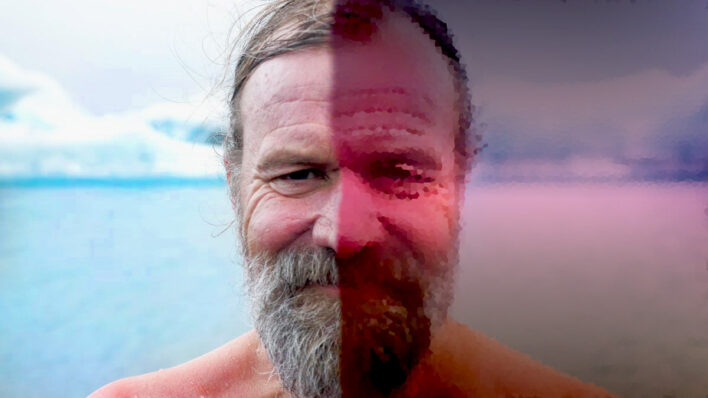 Wim Hof made his name by undertaking superhuman feats of endurance and becoming a guru, of sorts, for those trying to surpass their own limitations. But the drive behind those accomplishments was born in the wake of an unbelievable tragedy.
By Maya Khamala    April 21, 2022

Wim Hof made his name by undertaking superhuman feats of endurance and becoming a guru, of sorts, for those trying to surpass their own limitations. But the drive behind those accomplishments was born in the wake of an unbelievable tragedy.

Wim Hof, AKA “The Iceman,” has been beating world records into the ground for the better part of 20 years now.

From climbing Mount Everest wearing only shorts, to submerging himself in ice water for far longer than anyone should be able to survive, to voluntarily activating his immune response, Hof has long been an object of awe and disbelief worldwide. Scientists have been largely unable to figure out how he does what he does.

RELATED: Wim Hof: The Iceman’s Heroic Journey To Warming The Hearts of Millions

Hof’s breathing techniques (rooted in ancient Tibetan Tummo), coupled with his cold endurance techniques, are widely hailed for their countless health benefits. People around the world who practice his method have reportedly found relief for everything from depression and anxiety to autoimmune disease to a depleted immune system — to name just a few.

Yet very few people actually know Hof’s dark origin story, or about how The Iceman was truly born.

How Wim Hof Became The Iceman

Before Wim Hof was Wim Hof, he was just a regular guy living in a commune. Until he fell in love, that is.

“I met her when I was 20, and she was beautiful,” he says of his then future wife, Marivelle-Maria, who he met during this period. “She was so extroverted. She talked to everybody, she danced in the park. I called her a butterfly. And then I fell in love with her… It was the greatest time of my life.”

But, as fickle life would have it, misfortune disrupted those beautiful times: the love of Hof’s life became sick. During the early days of their marriage, Hof thought she was suffering from mild depression, but by the time the pair had four children, she had been diagnosed with schizophrenia.

“A shadow came in our life,” he recalls. “And that shadow grew larger and larger. And she was drifting away, because the darkness took over… At two o’clock in the morning, she kissed our kids goodbye, before jumping from eight stories down.”

Wim was left with a hole in his life. “Afterwards I did not know what to do with my grief,” says Hof. Having been unable to help his wife, he found himself deeply immersed in his own suffering.

“I had to stay alive, create warmth, energy, for my kids. And how, I did not know.”

Answers were generally lacking, and for a long time, Hof hid his pain from his children. But a few years later, when he was walking in a park near a frozen lake, he felt drawn to the ice cold water.

“It was Sunday morning, there was nobody in the park, and I stripped myself of my clothes and slipped slowly but surely into the water.” And that’s when his epiphany occurred. It was as though all the chatter in his mind suddenly came to a halt, and he felt peace.

He repeated his ice cold dunk in the lake every day that followed. Of course, with time, he began to attract a lot of attention from curious onlookers. Eventually, his practice brought media attention as well, with reporters wanting to capture him climbing Mt. Everest in his shorts, running a marathon beyond the polar circle, and swimming under ice.

Hof’s answer was resounding: “I can do it all, because compared to a grieving heart, it is nothing.”

Experts, were, of course, baffled, as they tend to be when the expected gets turned on its head.

But, like everything that gets pushed to its limit (or beyond), it turns out even Wim Hof had a breaking point. The day before breaking the world record for swimming under ice, he decided to do a practice run. But rather than keep it to a half run as everyone suggested, he planned to swim the full 60 meters under ice.

RELATED: What is the Meaning of Life? An Exploratory Guide

But having forgotten his goggles that day, Hof’s eyes soon froze, and he could no longer see the hole in the ice through which he was meant to exit. Going on instinct alone while continually counting his strokes, he ventured too far beyond the hole. After two minutes trapped below a pane of ice with no air, swimming back and forth in an effort to find the hole, Hof’s body began to shut down. He was dying.

“But you know what?” says Hof, “Because I did the breathing so thoroughly before going in the ice, I still had the right chemistry in my body, even though I didn’t have any oxygen anymore. I never felt the agony of drowning. I realized in that moment I had conquered the fear of death. And then a diver took me back by my ankles!”

Wim Hof and How to Find the Meaning in Suffering

Austrian neurologist, psychiatrist, philosopher, writer, and Holocaust survivor Victor Frankl once said, “In some ways, suffering ceases to be suffering at the moment it finds a meaning.”

Hof may have entered the ice that day without remembering his goggles, but he emerged with renewed meaning.

“My heart was broken. It is a physical thing as much as a mental thing,” says Hof. “The only thing that gave me peace was the cold. Cold, hard nature is the cure, I am convinced of it. It allows us to live, and to handle our grief.”

Of his teachings, Hof says, “Everybody has this innate capacity, the power of our mind…that’s the way nature has built us…Maybe I was chosen to do that. To help myself, that’s one. But to help millions of others, that’s a blessing.”

“I didn’t know all this then,” he says, “so I couldn’t save her [my wife], but I…could have made an intervention. Now, I do work with people who have mental illness. I have helped people who are having suicidal thoughts. My wife’s death inspired this, and it is her legacy.”

RELATED: Chris Gardner Beyond the Pursuit of Happyness: The Work Begins

But while Hof might attribute his life’s calling to his wife’s legacy, it is undeniably also his own. Darkness can either break or make a person, and no one embodies this truth better than Wim Hof. He was able to confront his cold hard grief with cold hard temperatures and live to help countless others reclaim agency in their lives as well.

What a beautiful way to transform one’s grief: by stripping away everything but breath and ice, only to discover a potent power to heal oneself as well as others hidden there—an underwater gem.

How to Develop Your Self-Discipline