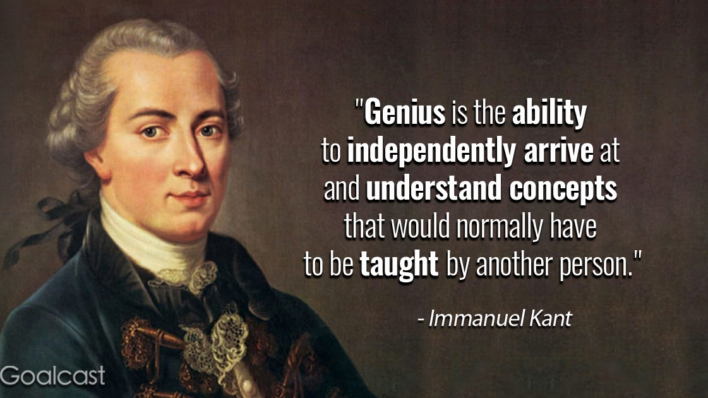 Immanuel Kant was a great German philosopher of the Enlightenment Era. Here are 25 Immanuel Kant quotes on pure reason and morality.
By Flavia Medrut    November 21, 2019

Immanuel Kant was a great German philosopher of the Enlightenment Era. Here are 25 Immanuel Kant quotes on pure reason and morality.

Immanuel Kant (22 April, 1724 – 12 February, 1804) was a great German philosopher of the Enlightenment Era. His most popular work is the Critique of Pure Reason.

Before becoming a full professor at the University of Konigsberg he worked as a tutor while exploring the middle ground between rationalism and empiricism.

Kant argues that humans only believe in the things that are sure to exist; things we’ve seen or touched. In reality, there are many other things out there that remain unknown to us yet, but that doesn’t make them less real.

Kant focused on ethics and morals and the way they affect our reasoning. He proposed a moral law called the “categorical imperative” — an unconditional obligation often known as the principle of universalizability. According to it, one cannot make exceptions for oneself if one claims to be moral. Once we accept a wrongdoing by blaming circumstances, we make it a universally acceptable act.

We aren’t all philosophers, but we can definitely try to understand some principles that can turn us into better humans. You know what the internet says: “Immanuel Kant, but at least Immanuel tried.”

Here are 25 Immanuel Kant quotes on pure reason and morality:

How then is perfection to be sought? Wherein lies our hope? In education, and in nothing else.

All our knowledge begins with the senses, proceeds then to the understanding, and ends with reason. There is nothing higher than reason.

He who is cruel to animals becomes hard also in his dealings with men. We can judge the heart of a man by his treatment of animals.

There is something splendid about innocence; but what is bad about it, in turn, is that it cannot protect itself very well and is easily seduced.

One who makes himself a worm cannot complain afterwards if people step on him.

Happiness is not an ideal of reason but of imagination.

The busier we are, the more acutely we feel that we live, the more conscious we are of life.

Genius is the ability to independently arrive at and understand concepts that would normally have to be taught by another person.

Man must be disciplined, for he is by nature raw and wild…

An action, to have moral worth, must be done from duty.

Have patience awhile; slanders are not long-lived. Truth is the child of time; erelong she shall appear to vindicate thee.

Whereas the beautiful is limited, the sublime is limitless, so that the mind in the presence of the sublime, attempting to imagine what it cannot, has pain in the failure but pleasure in contemplating the immensity of the attempt.

For peace to reign on Earth, humans must evolve into new beings who have learned to see the whole first.

Seek not the favor of the multitude; it is seldom got by honest and lawful means. But seek the testimony of few; and number not voices, but weigh them.

Out of the crooked timber of humanity, no straight thing was ever made.

Only he who, himself enlightened, is not afraid of shadows.

Space and time are the framework within which the mind is constrained to construct its experience of reality.

All false art, all vain wisdom, lasts its time but finally destroys itself, and its highest culture is also the epoch of its decay.

Without man and his potential for moral progress, the whole of reality would be a mere wilderness, a thing in vain, and have no final purpose.

Enlightenment is man’s emergence from his self-imposed immaturity. Immaturity is the inability to use one’s understanding without guidance from another.

By a lie a man throws away and as it were annihilates his dignity as a man.

The humiliating difference between laymen and clergymen must disappear, and equality spring from true liberty.