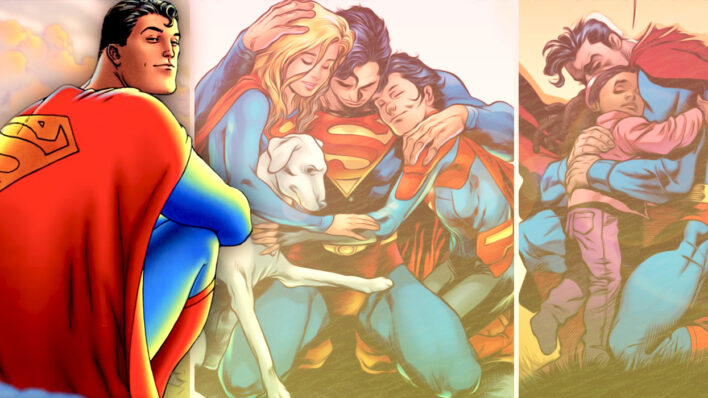 Superman is one of the most famous and beloved superheroes in the DC universe. Here are some of his best quotes that will inspire and motivate you.
By Flavia Medrut    April 15, 2022

Superman is one of the most famous and beloved superheroes in the DC universe. Here are some of his best quotes that will inspire and motivate you.

Superman was created by writer Jerry Siegel and artist Joe Shuster, and ever since 1938, he continues to be one of the most famous and enduring characters in all of fiction.

Strong, courageous, with a powerful sense for justice and a deep love for humanity, the Kryptonian embodies the ideals of what a hero should be. While he is a man of action, rather than one of many words, he sure has his fair share of wise speeches and comebacks, thanks to the creators who put passion and love into his dialogue. With that in mind, here are Superman’s most inspiring quotes from movies, TV shows and comic books.

“Dreams lift us up and transform us into something better…”

Full Quote: “Dreams lift us up and transform us into something better. And on my soul, I swear that until my dream of a world where dignity, honor and justice are the reality that we all share, I will never stop fighting. Ever!” – Superman vs. The Elite

We all dream of a better world, but how many of us actually do something about it? Of course, a little help from a superhero would totally be welcomed, but that’s just not realistic… at least not in our universe..

Each one of us has to fight for a better world. Being kind even if no one is watching is something anyone can do on a daily basis, and it’s sure to make a difference. So dare to hope that one day this world will be as you always dreamed, but don’t forget to bring your own contribution.

“I know the world is not an equitable place…”

Full Quote: “I’m not an idiot, Black. I know there are bad men in power and the world is not an equitable place — but you can’t throw morality in the garbage just because life’s tough!” – Action Comics #775

This iconic quote is from dialogue between Superman and the vicious antihero, Manchester Black, and it perfectly describes our superhero’s integrity and faith in humanity.

Superman is realistic about the world we live in. He sees everything that is wrong with many people in power, but that doesn’t make him renounce his principles. He is ready to fight for justice and morality even when the odds are against him.

Being corrupt is easy, holding on to your principles is the true challenge. What will you choose?

“I once thought I could protect the world by myself. But I was wrong. “

Full Quote: “I once thought i could protect the world by myself. But I was wrong. Working together, we saved the planet. And I believe that if we stay together, as a team, we would be a force that could truly work for the ideals of peace and justice.” – Justice League: Secret Origins

Superman is one of the strongest superheroes to ever grace comics or any other medium. He fought and won against many villains on his own, but even the Man of Steel needed help at some point. No one person, no matter how powerful, can solve all the world’s problems alone.

Just like Superman, you might think that you don’t need any help, simply because you’re used to taking care of everything on your own. Only by allowing others to join forces with you can you realize just how much more can be accomplished. They don’t say that “teamwork makes the dream work” for nothing.

“Sometimes you’ll feel like an outcast, but you’ll never be alone.”

Full Quote: “You will be different, sometimes you’ll feel like an outcast, but you’ll never be alone.”

Even if he is better than most humans, both in strength and character, Superman has often felt like an outcast.

People can be cruel to those who are different, even when they are “good different,” and this can create a sense of loneliness. But whenever you feel left aside, try to remember that you are not alone and someday you will find your crew. You don’t have to change who you are, you just have to have faith that the right kind of people will come along.

Full Quote: “If there is a solution to hunger it must be one that comes from the compassionate heart of a man and extends outward towards his fellow man.” – Superman: Peace on Earth

Seems like Superman has found a simple solution to a complex problem, right? Now, of course world hunger isn’t something that can be solved overnight. And maybe compassion isn’t the sole solution, but it would definitely make a big difference.

We should reach out to those in need and inspire others to do the same. The problem when it comes to hunger, is that a lot of people leave it to leaders and rich individuals. As long as we can’t process the fact that a world problem is our problem as well, nothing much will change.

Full Quote: “It’s never as bad as it seems. You’re stronger than you think you are. Trust me.” – All-Star Superman

If you’re a fan of Superman comics, you probably remember the emotional moment where the Man of Steel stops a troubled teenager from jumping off a building. Not that there are no other moments that are more or equally emotional, but this one serves us as a reminder that we are all stronger than we think.

How many times have you said to yourself that you can’t take it anymore? Superman didn’t come to the rescue, yet here you are, thriving in spite of how desperate and hopeless you felt. You’ve still got what it takes to move your own mountains!

“There is a superhero in all of us…”

Full Quote: “There is a superhero in all of us, we just need the courage to put on the cape.” – Superman and Lois

So we know about superheroes that have superpowers. But we also know about some that are… human. What do they all have in common? Courage, compassion, integrity and a strong sense for justice.

Superman’s ability to fly, his X-Ray vision and super speed are definitely pluses, but it’s his choice to use those powers to do good that makes him a superhero. If you can take a stand for truth and justice, you are already a superhero within.

The cape is optional, but you know… whatever helps.

Giving a second chance to someone who has once betrayed you is a difficult thing, even in the world of superheroes. They’re supposed to know better right? But not even superheroes are perfect, so how could we, as humans, be anywhere near flawless?

RELATED: 120 of the Best Anime Quotes of All Time

We can definitely try, but when we do make mistakes and sincerely regret them, we could sure use a friend like Superman who is willing to forgive and trust us again. But if you think you are worthy of a second chance after doing someone wrong, maybe some of your friends are too.

Full Quote: “I thought I had to leave to find out who I was…but it turns out I only needed to learn where I came from. Because I already know who I am. I’m a man who knows the benefit of hard work and honesty. A man who knows the difference between right and wrong. A man who can help people all over the world. I’m Clark Kent.” – Adventures of Superman #6

As it turns out, even Superman had some identity issues. While he didn’t appear to be on the surface, he was different from anyone around him. THat’s why, at one point, he thought that in order to find out who he really is, he needed to leave Earth. But the only thing he needed to find out was his origin.

We tend to put labels on anything, including ourselves. So when we’re asked “who are you?”, a lot of us would use our status or job title for an answer. But we’re not just that, are we? We’re complex human beings and what really defines us is our character.

“Follow truth, seek justice, and stand with your family…”

Full Quote: “Remember, son: follow truth, seek justice, and stand with your family who loves you. Even when they’re not perfect.” – Superman: Rebirth

Here’s some simple, yet meaningful advice that you can offer your children — to care for justice and always stick with their loved ones.

There’s no such thing as a perfect family… unless it’s in an ideal fictional world like in movies. However, your family doesn’t have to be perfect, but loving, caring and supportive.

People will sometimes mess up, whether if affects you directly or not. But as long as they are willing to fix their mistakes and make it up to you, you’ve got the closest thing to a perfect family.

“There is a right and a wrong in this universe…”

Full Quote: “There is a right and a wrong in this universe. And that distinction is not hard to make.” Superman: Kingdom Come

This quote from Kingdom Come by Mark Waid and Alex Ross, comes from an aged Superman that now has to deal with young superheroes who are dangerous and reckless.

Since everything went wrong around him, the Man of Steel tried to retire and live a quiet life on his farm. But he’s quickly spurred back into action by these young superheroes that are careless and can’t seem to discern between the right and the wrong.

Superman proves again just how much he cares for mankind as he comes back to teach these youths what being a superhero actually means. It’s just as important that the older generation imparts the same wisdom… and learns something from the younger generation, too.