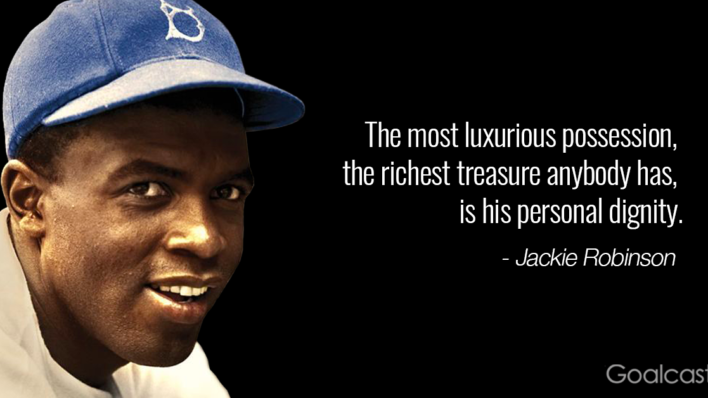 Jackie Robinson was the first black baseball player to play in the American Major League during the 20th century, after
By Flavia Medrut    August 24, 2018

Jackie Robinson was the first black baseball player to play in the American Major League during the 20th century, after they had not had an African American team member since 1889.

Robinson grew up in a large, single-parent family and due to financial struggles, he had to leave college. But since Jackie excelled at all sports he played, he immediately drew the attention of the general manager of the Brooklyn Dodgers, Branch Rickey.

After signing the contract, Robinson’s baseball career was stellar. In 1947 he was named Rookie of the Year and ever since then he led the Dodgers to six league championships and one World Series victory.

While you might think his life had suddenly become easy and extravagant, Jackie’s experiences were quite different — he had to face serious challenges. Fans would insult and hurl bottles at him for reasons having to do with race; players from opposing teams would deliberately spike him when given the occasion, not to mention that some of his own teammates openly protested against having to play with an African American.

Robinson decided to fight back by becoming the best at playing baseball and the first black person to enter the Baseball Hall of Fame.

Here are 14 Jackie Robinson quotes on ambition and equality. Plenty of times I wanted to haul off when somebody insulted me for the color of my skin, but I had to hold to myself. I knew I was kind of an experiment. The whole thing was bigger than me.

A life is not important except in the impact it has on other lives. The most luxurious possession, the richest treasure anybody has, is his personal dignity.

This ain’t fun. But you watch me, I’ll get it done.

I’m not concerned with your liking or disliking me. All I ask is that you respect me as a human being.

No matter how much or how little I knew technically, I was able to get the best out of people I worked with.

Above anything else, I hate to lose. Life is not a spectator sport. If you’re going to spend your whole life in the grandstand just watching what goes on, in my opinion you’re wasting your life.

There’s not an American in this country free until every one of us is free.

During my life, I have had a few nightmares which happened to me while I was wide awake. I’m grateful for all the breaks and honors and opportunities I’ve had, but I always believe I won’t have it made until the humblest black kid in the most remote backwoods of America has it made.

I think if we go back and check our record, the Negro has proven beyond a doubt that we have been more than patient in seeking our rights as American citizens.