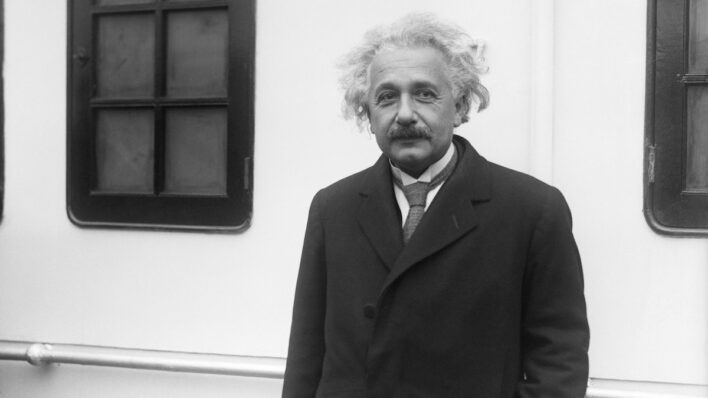 Photo: MPI/Getty Images What can we say about Albert Einstein that hasn’t already been said? Today his name is synonymous
By David McDiarmid    May 3, 2021

What can we say about Albert Einstein that hasn’t already been said? Today his name is synonymous with genius, and his pioneering work in the scientific community has cemented him in history as one of humanity’s foremost intellectual giants.

But there is a lot more to Albert Einstein than his theory of special relativity, his involvement in the invention of the atomic bomb, or how he described the link between space and time for objects moving at the speed of light.

Einstein was born in Ulm, Württemberg, Germany on March 14, 1879. His father’s name was Hermann Einstein, and before marrying his father, his mother’s name was Pauline Koch. Einstein also had a sister named Maja, two years his elder. They were a secular Jewish family.

Not the most beautiful baby

Apparently, Albert Einstein had a bit of an abnormal skull shape when he was born, something that worried his family. Although within a few weeks of his birth the shape of his head had returned to normal, his family continued to have concerns, particularly since he reportedly experienced speech challenges early on.

Albert Einstein: not a big talker early on

In fact, according to his parents, Einstein didn’t even speak until he was four years old! However, one day at dinner he broke his silence in quite an amusing manner. He suddenly said “The soup is too hot,” stunning his parents. When they asked why he had never spoken before, the young Einstein explained: “Because up to now everything was in order.”

And while he obviously got over his difficulties with language, apparently he only spoke rarely until he was almost 10 years old, practicing sentences in his head or under his breath until he got them right.

In retrospect, it’s clear that his parents didn’t have anything to worry about, and that their gifted young son was simply suffering from what Stanford economist Dr. Thomas Sowell was later to coin “Einstein Syndrome,” a condition used to describe exceptionally bright people whose speech is delayed.

Einstein attended elementary school at the Luitpold Gymnasium in Munich. And while he reportedly struggled with the institution’s “rigid pedagogical style,” he was not a bad student. In fact, he really appreciated classical music, picking up the violin early on and playing the instrument for the rest of his life. Overall, Einstein was a deeply inquisitive young man.

Around that time, (the late 1880s), a Polish medical student that sometimes ate dinner with Einstein’s family became his informal tutor. Max Talmud introduced young Einstein to certain scientific texts that later inspired him to dream about the nature of light.

Along with his musical abilities, young Albert Einstein was also quite gifted in mathematics, algebra and physics.  Records show that Einstein was indeed a child prodigy, able to discuss college physics at a high level before he was 11 years old. He also got high marks in Latin and Greek.

There is a persistent rumor that Einstein wasn’t always a great student early on, but this misapprehension is likely the result of his inability to master French, something many felt was the reason he failed his college entrance examinations.

What made Albert Einstein a genius?

Einstein was obviously naturally gifted, but he may have received a little bit of extra inspiration from his surroundings. His father Hermann, a salesman and engineer, had co-founded Elektrotechnische Fabrik J. Einstein & Cie along with his brother. The company that mass-produced electrical equipment.

Perhaps the simple proximity to the power of electricity demonstrated at home was enough to start him off on his intellectual journey? No matter what it was, Einstein didn’t waste any time with his investigations, penning what would later be considered his first major paper, “The Investigation of the State of Aether in Magnetic Fields,” when he was still a teenager.

The family relocated the family to Milan, Italy when Einstein was in his late teens (during the mid-1890s) after his father’s business lost out on a large contract. However, Albert was able to complete his schooling at the Luitpold Gymnasium by staying at a relative’s boarding house in Munich.

Eventually faced with military duty, Einstein found a way out and rejoined his family abroad, withdrawing from classes with a claim of “nervous exhaustion.” He later gained admission into the Swiss Federal Institute of Technology in Zurich to further pursue his studies in math and physics.

Before going to university, however, Einstein was forced to complete some classes at a high school in Switzerland. There, he fell in love with the schoolmaster’s daughter Marie Winteler. He renounced his German citizenship and became a Swiss citizen just as the 20th century began.

If you’ve ever felt bad at being forgetful, don’t worry too much. It happens to the best of us! Even Einstein had a poor memory at times. He is reported to have had trouble remembering dates, or sometimes his own phone number.

According to one story, while he was on a train a conductor asked him for his ticket. Searching his pockets, he confessed he couldn’t find it. The conductor ended up recognizing him, allowing him to ride for free, but Einstein responded: “Thank you, but if I don’t find my ticket I won’t know where to get off the train!”

Typical of those with genius-level IQs, sometimes they are so focused on the larger elements of study that simple things are beyond them.

More than just a patent clerk

While Einstein had a big future ahead of him, his difficulties finding employment in academia should be a lesson to anyone struggling today. Sure, he may have alienated some professors over issues of attendance, but it still took him years to get steady work.

Einstein eventually found that work in a Swiss patent office in 1902. But that wasn’t his destiny. While working at the patent office as a clerk, he was able to take care of his duties relatively easily, using the extra time to further explore ideas that he originally encountered at the Swiss Federal Polytechnic School. The result of his work resulted in the theorems that would later become known as the principle of relativity.

1905 is now known as the “miracle year,” one in which Einstein had four major physics papers published. They were published in the Annalen der Physik, one of the premiere physics journals at the time. Two of his papers concerned themselves with the photoelectric effect and Brownian motion, respectively.

The two other papers that he published outlined two other massive contributions to the world of science. The first was his special theory of relativity, and the second paper contained perhaps the most famous equation in the world, E=MC2. Collectively, these papers defined both Einstein’s career and entire discipline of physics.

His most famous discoveries

Einstein first proposed a special theory of relativity in 1905 in his paper, “On the Electrodynamics of Moving Bodies.” This work foreshadowed the development of some of the work that was later done to harness atomic power, and led to the creation of the atomic bomb.

By November 1915, he had completed the general theory of relativity, and considered it the culmination of his life’s research. General relativity helped provide more accurate predictions of planetary orbits around the sun, and allowed for a more advanced description of gravitational forces.

General Relativity stated that gravitational fields cause distortions in the fabric of space and time, a theory that remained controversial until a solar eclipse in May of 1919. It provided the perfect way to test his claim that a supermassive object (in this example, our sun) would cause a measurable curve in the starlight passing by it.

How a solar eclipse made Albert Einstein famous

English astronomer Arthur Eddington hoped to prove Einstein’s theory by heading to the coast of West Africa. He took photos of the eclipse, and found in his analysis that the sun’s gravity had deflected the light by roughly 1.7 arc-seconds, just as Einstein predicted with general relativity.

The news was huge for Einstein, making him an overnight celebrity and launching him on a world lecture tour. Now considered the true heir to Sir Isaac Newton, more than 600 books and articles were written about the theory of relativity in the several years after Eddington’s West African efforts.

In 1921, Einstein won the Nobel Prize for Physics, but he didn’t actually win it for the Theory of General Relatively, but instead “for his services to Theoretical Physics, and especially for his discovery of the law of the photoelectric effect.”

astrophysicist Arthur Eddington, mentioned above, may have proved the theory of relativity in 1919, but the Nobel Committee thought his work in West Africa too unreliable to serve as definitive proof at that point.

In 1903, while still at the Swiss patent office, Einstein married a Serbian physics student named Mileva Maric. However, the couple had a daughter, Lieserl, born in Serbia out of wedlock prior to their marriage.

The baby’s history is unknown, as she was either raised by Maric’s relatives, died of cholera, or was given up for adoption. There is no evidence that Einstein ever saw his daughter.

Did Albert Einstein have children?

Afterwards, the couple had two sons, Hans Albert Einstein and Eduard “Tete” Einstein. One became a hydraulic engineer, and the other was diagnosed with schizophrenia as a young man.

Einstein’s marriage to Mileva Maric was not a happy one, and the two divorced in 1919. We can get a glimpse into the interesting nature of their dynamic as a couple with a set of strict rules Einstein insisted his wife follow.

Apparently, he demanded that she serve three meals a day, that she stop talking if he asked her to, and to expect no intimacy from him beyond those included in everyday social situations. It’s not hard to imagine why it didn’t work out!

Einstein also began an affair with his cousin, Elsa Löwenthal, at some point during his marriage to Mileva. Einstein ended up marrying his cousin in 1919, the year he was officially divorced. As part of a settlement, agreed to give Maric any funds he might receive from possibly winning the Nobel Prize in the future (which he did).

Fun Fact: Albert Einstein was offered the presidency of Israel

It’s true! Shortly after Chaim Weizmann’s death (Israel’s first president), David Ben-Gurion asked Einstein to be the second president of Israel. He declined, (he was 73) explaining that he was too old, and didn’t have the people skills or experience to do the job well. Sometimes a smart man knows when to say no!

Einstein left Berlin for the good old USA in 1933, but his support for pacifism, civil rights and left-wing causes drew suspicion from the notoriously suspicious J. Edgar Hoover. The FBI kept tabs on him for 22 years, listening to phone calls and going through his mail. It turns out he wasn’t a Soviet spy, and the 1,800-page file was an exercise in futility.

How did Einstein die?

Albert Einstein died in his sleep in 1955 after suffering from a ruptured aneurism. He refused surgical treatment, explaining “I want to go when I want. It is tasteless to prolong life artificially. I have done my share, it is time to go. I will do it elegantly.”

Want to know more about the mind of Albert Einstein? Check out these inspiring Albert Einstein quotes for some of his most memorable turns of phrase.