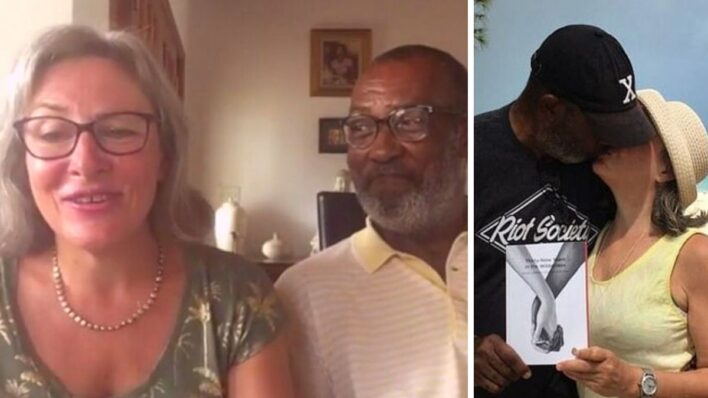 39 Years Ago, Her Father Forbade Her From Being With a Black Man – Today, They Finally Tied The Knot

Two teenagers deeply in love were forced apart by their parents. Nearly four decades later, they found each other again.
By Joel Balsam    November 3, 2021

Two teenagers deeply in love were forced apart by their parents. Nearly four decades later, they found each other again.

In the late 1970s, Penny Umbers and Mark Bethel met at a private school in Nottingham, England — and the two teenagers fell in love.

They continued to keep in touch after Bethel returned home to the Bahamas by exchanging love letters, poems, and paintings.

When it was time to attend university, Bethel went to study in London and Umbers got into a polytechnic college nearby so they could be close to each other.

But their relationship ended, seemingly out of the blue.

Umbers was devastated. She dropped out of college and even attempted suicide, according to Birmingham Mail.

He was everything to me, he made me feel so loved, and so to not see or hear from him was unbelievable.

Parents broke up their relationship

After their break-up, Umbers and Bethel went on with their lives. Umbers got married and divorced twice, while Bethel also had a serious relationship that didn’t work out.

But in 2019, Bethel managed to track Umbers down on Facebook and revealed the truth of why he broke up with her.

“When we spoke in 2019, Mark told me, for the first time, what had happened at school,” said Umbers.

He had been talking to my father in the garden and I remember thinking they had so much in common because they both liked sports. But in actual fact, my father had said to him ‘you’ve had your fun, now move on boy.’ It absolutely shattered him, he was such a sweet lovely boy and he was really in love with me.

Umbers’ father’s threats escalated to the point where he called Bethel out of class to the vice principal’s office for a stern warning.

“My father told him he knew people in high places and would have his scholarship revoked if he didn’t stop seeing me and that I must know nothing about this,” Umbers added.

Bethel’s parents were against their relationship too, due to the fact that he is Black and Umbers is white.

Making up for lost time

Bethel admitted that the decision to break up with Umbers was extremely difficult for him.

“When we first met, I fell for her and it was magic. When her father spoke to me, I couldn’t believe I was in that situation,” he explained, according to Birmingham Mail. “I had to make the hardest decision of my life and I had to make it in isolation. I had no support mechanism, no friends or family, I couldn’t explain to her why I just wanted it to end. It was heartbreaking.”

Over the years, Bethel searched for Umbers, but couldn’t track her down.

“Then one day I found a photo of her in a black outfit outside Windsor Castle,” he said. “Thirty-nine years on, I wasn’t sure if it was her. I sent her repeated messages but she wasn’t really a Facebook user so it was a couple of months before she saw it. I just said ‘Is this Penny?’ and then it was! I felt nervous, apprehensive, happy, and giddy.”

The couple — now aged 60 and 61 — finally reunited in June 2021 when Umbers flew to see Bethel in the Bahamas.

She returned home after a few months, but when she flew back in October, Bethel proposed to her then and there.

“My confidence has come back,” she added. “I had a defeatist attitude whereas I stand up tall now knowing he did love me after all. It was so difficult to think the man I loved didn’t love me. I thought if he had discussed it with me, maybe we could have done something about it but he was far more accepting of authority and less rebellious than me. He wanted to fit in and do well, and he has done it in life. But he had to make sacrifices to do that.”

Even though you’ve probably read it here on this website many times, it’s worth mentioning again: love has no color, gender, sex, etc. It’s awful that these two lovebirds’ parents broke them up. But in the end, their connection triumphed, proving its never too late to find your person.