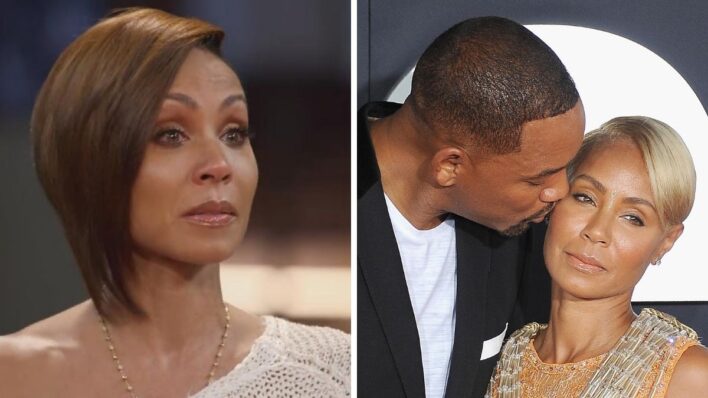 Jada Pinkett Smith Reveals Her Biggest Regret In Her Marriage

Jada Pinkett Smith’s marriage to Will hasn’t always been easy. The couple actually faced a major difficulty at the onset of their relationship.
By Shaoni Das    March 25, 2021

Jada Pinkett Smith’s marriage to Will hasn’t always been easy. The couple actually faced a major difficulty at the onset of their relationship.

Jada Pinkett Smith is known for being one of the most forthcoming and emotionally intuitive women in show business. In a town teeming with pretentious performers who change colors from one moment to the next, you can count on Jada to keep it real no matter what.

Over the years, she and her husband Will have exemplified what it means to wear your heart on the sleeve and acknowledge each and every aspect of the human experience: the good, the bad, the ugly. They’ve faced marital issues, parental struggles, illicit romantic “entanglements”, jealousy concerns, messy love triangles — you name it.

Yet, their love for each other rarely falters. They continue to persevere in the face of uncertainty and are ready to battle any force on earth that threatens their marriage, family, or mental wellbeing. But that doesn’t mean that they don’t hold their own share of regrets and insecurities about their past actions.

In one of the first instalments on Red Table Talk, Jada shared a lifelong regret pertaining to her marriage with Will. It’s a revelation that set the stage for many bombshells down the line, but it once again positioned Jada at her most vulnerable and honest. Here’s why what we can take away from her reveal:

In the first episode of Red Table Talk, Jada approached the subject of motherhood from a deeply personal space. She invited Will Smith’s ex-wife Sheree Zampino to come on the show and asked her to reflect on her marriage and subsequent separation with the Bad Boys actor — which coincided with Jada and Will’s early courtship.

While we can only speculate about the circumstances that drew Will and Jada together, Jada herself knew that she should have waited before getting together with Will. He was technically still married when they started dating and therefore had a strong but complicated rapport with Sheree and their three-year-old son Trey.

So when Jada waltzed into the family as Will’s new girlfriend, it undoubtedly soured the mood among the two ladies. Jada explained that she had very little knowledge at the time about what marriage or divorce entailed; she only took a chance on the passion that both Will and she shared for one another and decided to embrace the drama and the history.

But looking back on the whole situation, Jada said she wishes she could have treaded more slowly and been more considerate of Will and Sheree’s “unwinding” marriage.

Jada added that her “insensitivity” and her “inconsideration” at Will and Sheree’s relationship only exacerbated the issue. She should have given the former couple more space as they navigated through their divorce and were figuring out their identities outside of marriage.

Instead, Jada chose to meddle in their family dynamics and set co-parenting arrangements on her own terms. This grated Sheree, who had already been leery of Jada and her supposed motivations. Jada’s complacence could have cost her her relationship before it even took off properly, but the actress reigned it in and decided to own up to her mistakes.

Over time, Jada started realizing her errors and began supporting Will and Sheree in a more selfless, empathetic way that suited their headspace. The Red Table Talk host also said that she now understands Sheree’s early frustrations. Having been married to Will for well over 20 years, Jada could never imagine some other woman stepping in and threatening her support structure as she was getting a hypothetical divorce from Will. But that’s exactly what she inadvertently forced upon Sheree some 23 years ago.

Though Sheree and Jada started off as nemeses fighting for Will’s attention (romantic or otherwise), they overcame their differences eventually to build a big, beautiful blended family.

Young Jada wasn’t always amenable to confrontation. In the interview, both Sheree and Jada recalled an incident in which the former had called up the latter to get through to Trey, who’d been staying at his dad’s house for a little bit. Jada didn’t like Sheree’s attitude on the phone, so she’d told her something to the effect of, “I don’t really appreciate your tone.” To which Sheree said, “I don’t care.” Jada countered by hanging up the phone.

Afterward, Sheree called Jada again and let her know that she was living in a house that Sheree had “picked out.” Jada allegedly replied saying, “It’s my house now.” So it’s pretty evident that both the ladies suffered a case of entitlement in the early stages of their co-parenting relationship and wouldn’t have deigned to apologize to each other.

Jada also shared that it was Will that reprimanded her when the need arose. He “let [her] have it” upon hearing about the phone call. He reminded that Sheree is Trey’s mother and that it’s not Jada’s place to regulate whether or not he would be able to talk to his mother over the phone. When both ladies threw tantrums and took part in petty feuds, Will had to transform into a calming force that kept the peace.

At some point, Sheree started realizing that Jada was in for the long haul. Trey had become her “bonus son,” and the relationship between step-mom and step-son was becoming more and more genuine with time. When Trey told Sheree that he wanted to get Jada a candle, Sheree began perceiving Jada as a “woman who was doing the very best she could.”

Therefore, amidst the pain, the cattiness, the resentment, and the jealousy arose a wonderful connection between two women who’d otherwise be estranged had it not been for their persistence and self-belief.

I did a lot of work on myself. And I must say this relationship between [Sheree] and I was one of the fundamental relationships where I had to learn how to woman up.

Don’t be ashamed of your mistakes

Jada Pinkett and Will Smith may be multi-million dollar movie stars, but their dilemmas regarding co-parenting, boundaries, family, exes, and jealousies can be applicable to any other family in the world. Nobody can be prepared for what life throws at us, and so we will irrevocably end up making mistakes. Some mistakes will cause more harm than others, but the key factor to keep in mind here is accountability.

Being accountable for your actions is the first step to improving and righting your wrongs. Once Jada realized that she had overstepped and crossed boundaries during a particularly stressful time in their lives, she stepped back and let others decide the course of action. You can’t control other people’s reactions, but you can listen to them and ask them whether you can be of any help. Once you can freely acknowledge your errors, the path is free for you to move forward and begin healing.