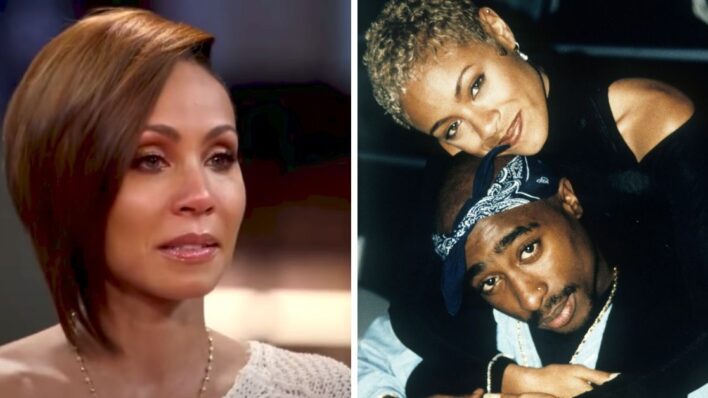 Jada Pinkett Smith’s relationship with Tupac still gathers a lot of attention. Jada reveals the impact he had on her and the conversations she has today.
By Shaoni Das    June 10, 2020

Jada Pinkett Smith’s relationship with Tupac still gathers a lot of attention. Jada reveals the impact he had on her and the conversations she has today.

As protests against racism and discrimination sweep the country, discussions about violence in our community have been brought to the forefront. Whether it’s alleged violence practice by several police bodies or the rioting and looting that is taking place at many of these, we all have to reckon with the nature of violence that runs through our cities and towns.

Celebrities too are speaking out. Jada Pinkett Smith is one such celebrity who took to address violence this week, particularly how violence can be turned against and affect women. Many might forget but the actress has a personal connection to violence — it was responsible for the death of her longtime friend and lover, Tupac Shakur.

Tupac Shakur’s death has been the cause of much speculation and controversy since it occurred nearly twenty-four years ago. The hip-hop artist was killed in a drive-by shooting in Las Vegas in September 1996. Although the police never officially charged anyone over the rapper’s death, some journalists and investigators believe that gang violence may have been the motive.

Whether it was gang violence or not, it’s safe to say that some violence in the community definitely played a part in Tupac’s killing. And Jada Pinkett Smith, who grew up with Tupac and maintained a close friendship with him, was nonetheless affected. When we understand the nature of her relationship with the late rapperThis is why it’s all the more interesting that she chose to speak up

Jada revealed that she grew up in a “warzone”

The actress chose to dedicate an entire episode of Red Table Talk on the issue of gun violence and how it affects women. Jada sat down with Lauren London, an actress and former girlfriend of Nipsey Hussle, a rapper who was shot dead outside his store. While discussing how Lauren became aware of gun violence, Jada shared her own perspective.

She said that she began noticing gun violence in her community when she was just in middle school. Jada said that the culture of gun violence, unfortunately, became a norm where she lived. It became so dangerous that Jada felt like she was putting her life on the line by just heading to a house party. As a result, she had to learn how to keep herself protected at all times.

For most of her life, Jada didn’t even realize that she’d been in such wildly dangerous circumstances. But when she had kids, she had to reflect back on her own childhood and prepare her children for the worst possibility. But she also had to understand that her kids would be growing up in vastly different realities. They wouldn’t have to bear the same fears that their mother did throughout her childhood and adolescence.

Jada’s mother, Adrienne Banfield-Norris, said in the same episode that trauma can be an incredibly lonely thing. Because people can sympathize but no one sees the world through the same lens of trauma that you’re experiencing. Erica Ford, an activist, said on the show that women, in particular, often lose their domestic partners to gun violence and then have to raise their children against the same threat.

Jada and Tupac’s relationship was all about surviving

Jada has disclosed in the past that she was a drug dealer when she met Tupac. She befriended the late rapper on the first day of high school in the Baltimore School for the Arts. While their friendship blossomed more than anyone could’ve ever imagined, they were just not on the same page.

Many, even to this day, imagined them to have been romantically connected. So much that Will Smith himself was jealous of Tupac. Even Jada admitted the undeniable chemistry of her first real encounter with the rapper, even though he had been “funny looking” in high school.

But as soon as he approached me, he was like a magnet. Once you paid attention to him he kind of sucked you in. And we hit it off from that moment on… I don’t think either one of us thought we would have made it in the way that we did, but we knew we were gonna do something.

The two had undeniable chemistry and even shared a kiss at one point, which was a moment of confirmation to the both of them–they were better off as friends. “There was a time when I was like, ‘Just kiss me! Let’s just see how this goes,’” Jada revealed in an interview with Howard Stern. “And when I tell you it had to be the most disgusting kiss for us both.”

Jada said that just as she was getting out of a life surrounded by the realities of crime, Tupac was just getting into it. So while the two shared a special experience together, they also went their separate ways soon after.

Jada has also said that her relationship with faith played a massive part in letting her escape that dangerous life and she desperately hoped that her friend Tupac would find a way out of it too. But ultimately, despite his efforts, he was gunned down and his life ended too soon.

Pac and I’s relationship was about survival. That’s how it started. I know that most people want to always connect it in this romance thing and that’s just because they don’t have the story.

Jada Pinkett Smith on SiriusXM’s Sway in The Morning

Regardless of how much we like speculating the nature of their relationship, the fact of the matter is that Tupac made a colossal impact on Jada’s life. She’s called his death a “huge loss” in her life. She said his death left her reeling in anger, not grief — she was frustrated at him for leaving her.

He was one of those people that I expected to be here. My upset is more anger. Because I feel that he left me. And I know that’s not true and it’s a very selfish way to think about it but I really did believe that he was gonna be here for the long run.

In fact, he wasn’t the only loss in her life that impacted her. A lot of Jada’s friends and family didn’t make it past thirty or even twenty-five.

Don’t forget your past — let it drive you

Jada is someone who’s always maintained a solid connection to her past, even though it’s hurt her and her loved ones in her family and community. Any other person could’ve just as easily chosen to leave it all behind and pretend it never existed. But Jada knows that she has a platform on which she can shed light on issues that are near and dear to her heart. Her relationship with Tupac solidifies how women can be left traumatized by gun violence as well, even though they may not have been targeted by it.

Both gun and gang violence is inherent in the culture we’ve created for ourselves. If it was just affecting a few people here and there, the effects wouldn’t be as devastating or widespread. It’s a complex system that enables both gun and gang violence. It’s so rampant that if people are lucky enough to left alive, they still have to carry the memories, the trauma, and the guilt of having survived when others didn’t.

But Jada knew that she had to address her past in order to help those who need it today. Following the death of George Floyd, a lot of debate has surfaced regarding the nature of violence and how it negatively affects communities of colour. But Jada didn’t just get in on the discourse because it is trending — she knows first-hand that if you don’t share the stories of women who’ve suffered at the hands of violence, then things might go from bad to worse.

We can learn from Jada that our past matters a lot, even if we don’t want it to. Even the ugly events that transpired in our past can direct us towards a path that will bring hope and change. Each human being has the potential to create change in their own little way.

She might not have been able to save Tupac from what eventually befell him but she can highlight other stories that might prevent another similar fatal incident from happening. She didn’t forget her past, she let it take control of her passions and principles. And we can learn a thing or two from her.