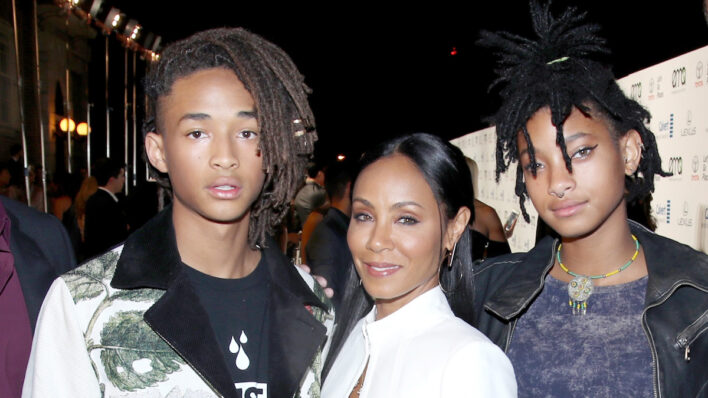 Jada Pinkett-Smith Opens Up About Her Experience With Mom-Shaming

Jada Pinkett-Smith and her husband Will Smith are known for being rather unconventional. Whether it is in the way they handle their relationship or their children, the couple likes to defy the norms of society. And when outsiders decided to question her parenting methods, Jada had a few inspiring things to say.
By Maya Khamala    November 10, 2020

Jada Pinkett-Smith and her husband Will Smith are known for being rather unconventional. Whether it is in the way they handle their relationship or their children, the couple likes to defy the norms of society. And when outsiders decided to question her parenting methods, Jada had a few inspiring things to say.

There’s more than one way to raise a child—if that weren’t true, we’d see far fewer unique personalities in this world. But while there is surely no one-size-fits-all formula for proper parenting, parent-child relationships which stray from the norm—particularly when it comes to gender expression—can draw ample criticism. Most often, that criticism is focused on the mother in the equation.

While Jada Pinkett-Smith and her husband Will Smith haven’t shied away from talking about their unconventional approach to parenting their children Jaden and Willow over the years (now 22 and 20 respectively), Jada has had to deal with more of the flak. Why? Because gendered double standards are not yet a thing of the past, so mom-mythology is more enduring than the less cohesive ideas about fatherhood floating around out there. Unfair, to say the least.

Jada and Will have been vocal about how they don’t punish their children, having decided that children should be given adult-sized responsibilities from a young age. They encourage creative expression, full-disclosure style honesty, and have not encouraged the usual gendered double standards when it comes to their daughter’s freedom—or their son’s. They don’t give their children fashion advice. In short, although their parenting strategies have evolved over the years, like most people’s do, the one constant is that they want their kids to be happy, and they want them to feel free being who they are.

People have been quick to judge Jada

During a recent episode of Red Table Talk, Jada sat down with both her mother and her daughter Willow to talk about mom-shaming. Pinkett-Smith has opened up about the criticism she received in 2012 after her daughter, then 12, shaved her head in the middle of the tour for her hit song “Whip My Hair.”

“I got shamed a lot for Willow,” she says. “There was a firestorm,” Jada recalls. Willow agrees, describing how the backlash at the time was “constant.” People really took issue with a young girl losing her locks.

But while Willow’s defiant move garnered some negative reactions, it was her son Jaden whose fashion choices went down even more contentiously. At 16, when he made the decision to pose in a Louis Vuitton campaign ad wearing a skirt—alongside three female models in skirts—people were very quick to cast intense negative judgements.

Jada has reflected, “he isn’t what people consider your typical Black man, which is like, what is that supposed to mean?” Jada has wondered. “They weren’t raised typically, and I think, especially for our community, it was something new,” she said. “Even in the [black] community, we create stereotypes around ourselves, and it’s something that we as a community really have to learn how to let go of,” Jada said. Even though the Louis Vuitton campaign crossed gender boundaries, Jada, who initially clashed with Will about it, supported her son’s decision which is perhaps why he was comfortable doing it.

Specifically with the African American community, I kind of felt like me and Jaden were like shunned a little bit, like we’re not gonna take pride in them because they’re too different. Even some of our family members, I would feel they thought, ‘You’re too different.’

In a powerful post-haircut Facebook post, Jada responded to a question she heard a lot at the time: why would ‘let’ your daughter cut her hair? “First, the LET must be challenged,” she wrote. “This is a world where women, girls are constantly reminded that they don’t belong to themselves; that their bodies are not their own, nor their power or self-determination. I made a promise to endow my little girl with the power to always know that her body, spirit and her mind are HER domain. Willow cut her hair because her beauty, her value, her worth is not measured by the length of her hair.

It’s also a statement that claims that even little girls have the RIGHT to own themselves and should not be a slave to even their mother’s deepest insecurities, hopes and desires.

On Red Table Talk, Willow acknowledged and praised her parent’s resilience. She told her, “To be able to see you and dad do that, for me, that was like, ‘OK that’s the real deal. That’s real love.’”

Her kids are living their best lives

Indeed, Will and Jada’s refusal to conform to ideals of parenting has paid off. The proof was in their children. “For me, looking at how my children were being affected, that’s what counts,” Jada says of encouraging her kids to follow their chosen path without shame.

Here’s a positive for you: having been raised to express themselves freely and creatively, Willow and Jaden Smith spend their lives doing exactly that. While the pair of them share a passion for singing, songwriting, and acting, Jaden is additionally a rapper, and Willow is a record producer and dancer.

Jada knows that the openminded and creative people her children have become is at least partly due to their upbringing, and their parents’ own tendency to think outside the box. After receiving criticism for allowing Willow to shave her head, Jada hit back:

If they could have seen this child’s expression of freedom, looking at her hair falling to the ground, so me as a mom looking at that, experiencing that with her, there is nothing that anyone could say to me to tell me that it was wrong.

“Not one person, because I was there, I was looking at her, I saw her face, I knew the journey that she and I took together to get to that point,” Jada continued. “And so it didn’t matter what anybody said.”

Of her son, Jada recalls how “Jaden talked about wanting to wear skirts to give kids the freedom, to give other people the freedom to think out of the box for themselves and not feel like in doing that that they would be bullied or be attacked in some way.”

Jaden has also spoken up about his eccentric style in relation to the pressures of being a poster child for a community. In the end, it boils down to more than his personal desire to express himself the way he wants to. “For me, when I represent the culture, I just really specifically want to let all the kids that are minorities, specifically the Black kids out there, [know] that you can wear flowers in your hair too or play guitar and sing and do this or spread peace and love and that’s cool. It’s totally something that’s acceptable to do and we’ve got your back.”

In a world where critical thought is so rare, I’ll go out on a limb and say that from where I’m standing, teaching kids to be nonjudgemental of their own differences makes it all the more likely that they will respect the differences of others. It’s hard to imagine a better way to help humanity flourish. Let’s face it: even in 2020, teaching your kids to keep an open mind and be true to themselves is a brave act.

Mothers should support other mothers

Jada Pinkett-Smith acknowledges that women and mothers share many struggles, and should therefore respect and support one another. “There’s many different ways to mother, there’s no one cookie-cutout way to be a mother,” she says.

So, I think, as a mother and as a woman, trying to support other women in how they see it’s best to mother their children is very important.

Since Jada knows firsthand how that support isn’t always present, she combats mom-shaming by example—with a ripple effect in mind, I’m betting.