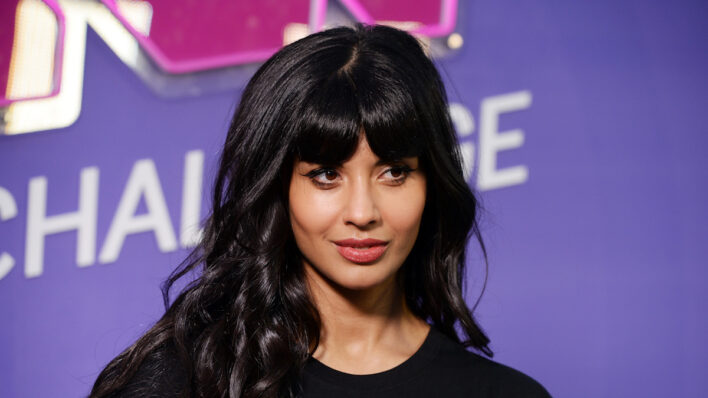 Jameela Jamil’s activism has often landed her in tumultuous situations but her confrontation with the Kardashians reveals a powerful truth.
By Arielle London    March 23, 2021

Jameela Jamil’s activism has often landed her in tumultuous situations but her confrontation with the Kardashians reveals a powerful truth.

Jameela Jamil is at the forefront of the “self-love uprising,” quite literally. The talented Hollywood actress has proved time and time again that she doesn’t need a script to make an effect, she just has to be herself. Jameela’s breakthrough role acting on The Good Place may have launched her into the world of fame and stardom but many know her best for her advocacy.

Jameela is recognized widely for promoting self-worth and also taking on media toxicity especially with her adamant anti-diet activism. Now, she is the face of The Body Shop’s new campaign to promote self-love and self-acceptance, which is a positive way to essentially battle the toxic media culture we all live and survive in daily.

The actress, model, radio presenter, writer, and all around powerhouse activist is unafraid and unapologetic when it comes to standing up for what she believes in. Jameela has been very open about her struggles in life and has been equally as active about bringing forth the change she wants to see. However, her willingness to be vulnerable hasn’t come without a price.

When Jameela was growing up in the 90’s the standard of beauty was known as “heroin chic.” This unhealthy and impossible portrayal of how a woman should look, essentially proclaiming that she must take up less space, had a harmful impact on Jameela during her teenage years. From the ages of 14-17 Jameela suffered from anorexia nervosa until she was essentially saved from the eating disorder by a terrible car accident.

Jameela was so severely injured after being struck by a car that she was told she may never walk again. During this painful ordeal, Jameela snapped out of her anorexia and changed her relationship with her body. The event essentially put her life into perspective and quite possibly saved her life in the process.

She realized a powerful truth after standing up to the Kardashians

Often the centre of controversy, Jameela’s potent choice of words, especially for those who perpetuate toxic media imagery such as the Kardashians, regularly make the news cycle. In Jameela’s own words, On Channel 4’s Ways To Change The World podcast she said of the Kardashians, “you are selling us something that doesn’t make us feel good.” She continued saying, “you’re selling us self-consciousness. The same poison that made you clearly develop some sort of body dysmorphic or facial dysmorphic, you are now pouring back into the world.”

With fame comes a platform, and Jameela believes that celebrities have a responsibility to be transparent with their fans, especially when what they are promoting may cause harm. Jameela called out Kim Kardashian specifically for promoting appetite suppressant lollypops for Flat Tummy Co. Jameela’s response to Kim’s promotion of the product went viral. Jameela cursed out Kim on Twitter and also called her a “terrible and toxic influence on young girls.”

In 2020 though, Jameela proclaimed that she was done calling out Kim Kardashian. After Kim posted a video on Instagram showing her disproportionately cinched waist in a custom made corset for her Thierry Mugler Met Gala look, Jameela’s inbox was flooded. The body positive activist received over 1000 DM’s asking for her to comment publicly on Kim K’s post. After the overwhelming number of messages she received, Jameela stated on Instagram, “the fact that you’re all messaging me about it, shows my work is done.”

Jameela Jamil continued on saying that she was never trying to “cancel” Kim Kardashian but rather she wanted to heighten people’s awareness to what is potentially harmful for their self esteem. Jameela also acknowledged that Kim was also just another victim.

Kim, like many of us, has had decades of body image issues and obsession. This has been HEAVILY perpetuated by how much the media scrutinized her and her sisters over their appearances.

She continued saying of Kardashian, “She isn’t actively trying to harm you.” Jameela’s more nuanced understanding of Kim’s position displays her evolution as an activist, from outrage to a more empathetic approach. In order to inspire change, being able to put yourself in someone else’s shoes is primordial. It can generate more constructive conversations.

Jameela’s advocacy goes well beyond calling out uber famous members of a money raking reality television family but includes a now wildly successful movement called I WEIGH. I WEIGH is all about radical inclusivity and often pushes very necessary conversational boundaries to bring forth real substantial change. I WEIGH was founded in 2018 and has evolved from an Instagram account to an all-encompassing advocacy platform.

In February 2019, Jameela created a petition on change.org called “stop celebrities promoting toxic diet products on social media.” In the petition the anti-diet activist said, “in the last few years we have seen a scary rise in the marriage of celebrity and diet/detox endorsement.”

There’s little to no information about the side effects or main ingredients, the harm they may cause or any of the science behind how these products are supposed to work. They are instead, flogged in glossy paid adverts by celebrities and influencers with no expertise or authority in nutrition/medicine/biology.

Jameela calls herself a “feminist-in-progress” because she believes in the importance of growing and learning. She and the I WEIGH movement both, do not support cancel culture and instead promote teaching over punishment. With that being said, she does not hesitate to hold powerful members of the public accountable when it comes to their promotion of dangerous practices or images that affect mental health.

Jameela is a warrior for the female mind and body experience. When there is a backlash to her activism, and the critics come for her, she stands tall and defends her beliefs. She is a role model for young girls, showing them that they can speak their minds and protect their futures.

Jameela Jamil has seen great success in her anti-diet activism fight, seeing real change occur on Facebook and Instagram in how they advertise to minors. Currently, the I WEIGH community is campaigning for two bills to reach the senate. Her fight against toxic advertisements in the media and I WEIGH movement’s success demonstrate that Jameela’s outspokenness is perhaps her greatest superpower.

In using her own voice, Jameela is protecting the youth from dangerous imagery online and uplifting the voices of so many around the world. Now as the face of The Body Shop’s self-love and acceptance campaign she is advocating for a “self-love uprising” in all of us.

As far as role models go, Hollywood has a true force to be reckoned with in Jameela. We were all given voices for a reason, Jameela Jamil just shows us how to use yours. Always remember to stand up for the causes you believe in and make sure to include believing in yourself on that list. You are your greatest advocate, even when you advocate on behalf of others.

The “self-love uprising” starts with each and every one of us loving ourselves for who we truly are. Sometimes love looks like courageously outspoken words and sometimes it is beautifully kind inward thoughts. To see the change you want to see in the world you have to be the change you want to see in the world first. Speak out and speak into existence a revolution of love with a ripple effect guaranteed to affect the lives of so many. Your voice is a gift that can be used to bring forth real change over time. Speak change into existence and be the advocate the world needs.