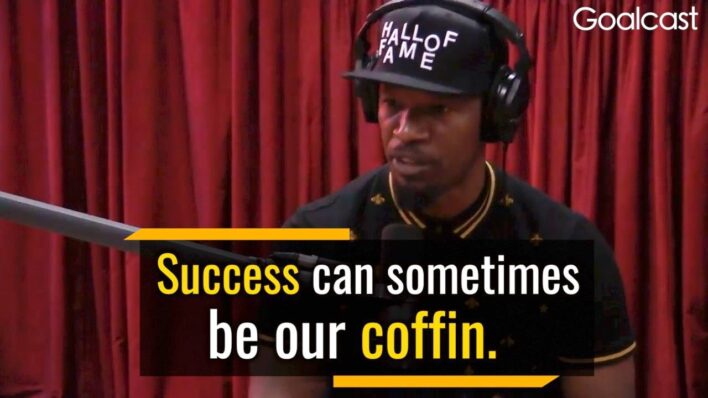 Jamie Foxx: What Helps Me Is the Failures

Jamie Foxx – Prepare for Your Opportunity Jamie Foxx speaks to Joe Rogan about how he got into the music
By Goalcast    August 7, 2017

Jamie Foxx – Prepare for Your Opportunity

Jamie Foxx speaks to Joe Rogan about how he got into the music industry by being surrounded by artists in the field and being prepared for opportunities.

Jamie Foxx: Success can sometimes be our coffin. I think what helps me is the failures, like doing a couple of movies that don’t … “What was that?” Know what I’m saying? Like, “Damn, Fox.” You know what I’m saying? Going through TSA, they don’t speak to you. Your movie is out and they’re like, “Come on through.” They don’t even make eye contact, “Come on through. All right good, go on through. Damn, that movie suck.” So you appreciate those, which keeps you regular, keeps you humble.

The way I got into the music, however, I was throwing these parties at my crib and I would always throw parties for musical guys. Go into my garage and there’s two guys, a little guy like this and a tall guy, the little guy goes, “Yo B, yo, it’s like this all the time, B?” I said, “Yeah, who are you?” He said, “We the Neptunes. My name is Pharrell.” I said, “Yeah, I might’ve heard of you,” that’s how long ago this was.

Jamie Foxx: So he’s like, “Can I …” I said, “Just go in, have a great time.” There was another guy standing on the wall, green jacket, like a green little jumpsuit, nobody’s talking to him, guess who it was.

Jamie Foxx: Jay-Z. Nobody knew. I said, “What’s up, man?” “Yeah, what’s going on? This is a great party, you know what I’m saying?” So Jay-Z, no one knows. And now the way I got into the music, however, is that all these different parties was going on and I would have like different musical people leave me music in my little studio that I built. I went and got this great studio built in the back of my house. So one day, in comes this kid, backpack on, jaw’s busted, who is it?

Joe Rogan: Oh, his jaw’s busted from like a car accident, right?

Jamie Foxx: Yeah. Kanye walks in. And I said, “Who’s that?” They said, “Oh, that’s that new motherfucker, Kanye, man. He about to be the shit.” I said, “What he do?” “Well, he produces but he also raps.” I said, “Well, anybody come into my house, they gotta perform.” So I said, “Yo man, they said you rap.” He rapped the most incredible freestyle, I don’t know if it was freestyle, it was incredible. I said, “I don’t know why you aren’t famous.”

Joe Rogan: He did it with a broken jaw?

Jamie Foxx: He had a little, jaw was a little swollen. I don’t think it was broken, but it was a little swollen, because it wasn’t too long after that accident that he had, right? And then he goes, “Uh, I- I- I got a song that- that- you- you would be good on. I- I got this song, I know you could kill.” And I was like, “Me? A song? Goofy face? Wanda from In Living Color?” He said, “Yeah.” I said, “Oh shit, cool.”

So we go in the back, I got this studio in the back, so he sings. He says, “The song’s gonna go, “She say she want some Marvin Gaye, some Luther Vandross,” so I said, “I got it.” (singing) He’s like, “What are you doing?” I said, “Well I gotta put the R&B on it, you know what I’m saying, I’m a real singer. You know, I been singing.” He said, “Uh, don’t. Just sing the song, because it’s hip hop.” And I said, “Okay, cool.” So I begrudgingly sung the song. I’m thinking song’s whack, he’s not gonna make it. So I went off, I did a bad movie, I come back about six weeks or eight weeks later, that song is number one. My boy goes like, “You remember that song you said wasn’t shit? It’s number one in the country.”

And then that’s how I got into the music. So long story longer, it’s like yeah, you can do all of the things and there’s a lot of actors and actresses that can, you just need those opportunities. Just like in life, when your opportunity comes, if you’re prepared for it, now you can jump into it and grab it.