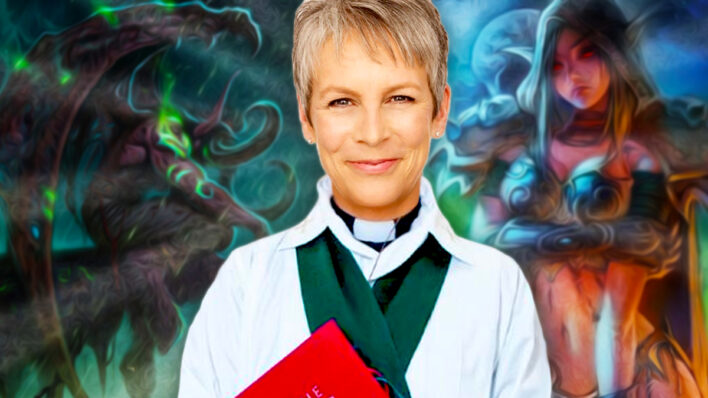 The incomparable star of ‘Halloween’ and now ‘Everything Everywhere All at Once,’ Jamie Lee Curtis has proven to be the best ally a child could have – in more ways than you might think.
By Maya Khamala    April 4, 2022

The incomparable star of ‘Halloween’ and now ‘Everything Everywhere All at Once,’ Jamie Lee Curtis has proven to be the best ally a child could have – in more ways than you might think.

To put it simply, Jamie Lee Curtis is, and has always been, ridiculously awesome.

Many know the actor best for her role as Laurie Strode in John Carpenters’ Halloween (1978), which spawned seven sequels over the decades, all of them with Curtis reprising her role as Strode. How’s that for legacy? She also played starring roles in the classic A Fish Called Wanda, True Lies, and more recently, Knives Out, and Everywhere All at Once, in addition to countless others.

But Curtis’s epic acting career represents just a small fraction of her awesomeness.

For one thing, she’s long been an advocate of natural beauty, which is no small feat as a woman in Hollywood. Fans love how she’s proudly worn her hair grey for many years now. She previously revealed that a cameraman’s comments about her ‘puffy eyes’ back in the ’80s led her to undergo plastic surgery, but she soon regretted it, which is why she today identifies as an advocate for “not f**king with your face.”

Curtis has shared that she felt her popularity suddenly rise with her first shift from the horror genre to comedies like Trading Places (1983), which emphasized her naked body over her other qualities. “Oh, I’ve had some wonderful opportunities,” she says. “I’m just saying there was a time when I was in exploitation movies, but that my biggest roles were to do with my physicality, my body, my sexuality.”

Perhaps it’s her own history of navigating a sense of body, sexuality and creative expression — so often dictated by impossible Hollywood standards — that led her to become such an admirable advocate of free choice for her two children.

Who Are Jamie Lee Curtis’s Kids?

After the doctors told them they couldn’t have children, Curtis and her husband Christopher Guest chose to adopt a daughter, Annie, back in the ’80s, and nine years later, a son, Tom.

Today, her daughter Annie is an accomplished dance instructor. Meanwhile, Ruby (formerly Tom), came out as transgendered in 2020 and works as a video editor for a gaming personality on YouTube, and will be getting married in her mom’s backyard this May.

Curtis has been vocally candid about her support for her daughter Ruby’s transition, recalling how she and her husband watched with “wonder and pride” as Ruby transitioned, while admitting that she’s still very much learning.

“It’s speaking a new language,” she said in an interview with People. “It’s learning new terminology and words. I am new at it. I am not someone who is pretending to know much about it. And I’m going to blow it, I’m going to make mistakes. I would like to try to avoid making big mistakes.”

She continues, “If one person reads this, sees a picture of Ruby and me and says, ‘I feel free to say this is who I am,’ then it’s worth it.”

“It was scary,” recalled Ruby, “just the sheer fact of telling them something about me they didn’t know. It was intimidating — but I wasn’t worried. They had been so accepting of me my entire life.”

Curtis’s history of advocacy and activism has undoubtedly contributed to the openness and acceptance that she shares with her daughters. For instance, in 2012, she starred in a staged reenactment of the federal trial that overturned California’s Prop 8 ban on same-sex marriage.

The production was broadcast on YouTube to raise money for the American Foundation for Equal Rights. Later, in 2016, the Human Rights Campaign released a video tribute to the victims of the Orlando nightclub shooting, in which Curtis and others told the stories of the people who were killed.

Come May, Curtis will be a whole lot more than the mother-of-the-bride: she plans to officiate the nuptials. The actress, now 63, will be proudly donning the garb of World of Warcraft‘s Jaina Proudmoore for Ruby’s upcoming cosplay wedding.

Yes, you read that right. Curtis does not draw the line at embracing her daughter’s chosen gender identity, she also embraces her chosen identity as a nerd, and with bonafide enthusiasm no less! This, friends, is #ParentingGoals.

“I [got the costume] on Etsy,” she said, going on to reveal that the shipment is delayed as the seller is in Russia, so she hopes to still be able to get it in time for the wedding this spring.

Curtis is particularly excited about the fact that Ruby will be getting hitched in her family home’s backyard, just like her older daughter Annie did few years ago.

“We’re gonna have a beautiful picnic in the backyard. I’m really excited,” she says. “Both my children will have been married in my backyard, which brings me to tears.”

When it comes to learning to embrace our children for who they are or choose to be, we could all learn a lesson or ten from Jamie Lee Curtis.

While the diversity and uniqueness of all human beings make the world a gorgeous and fascinating place, the feeling that you’re very different from your own kids can make embracing those differences a challenge. Or worse, it can cause friction and conflict.

For starters, it should go without saying that it’s worth it to “get into” or at least commit to learning more about anything that means a lot to your kids, be it World of Warcraft, modern dance, botany, or pro wrestling.

RELATED: The Truth Behind Eminem’s Fraught Relationship With His Mother

When your children feel comfortable sharing what they love with you, it opens the door for them to share with you who they really are on a deeper level. Sharing is a victory when it happens, and the reason your kids share is because they feel comfortable. In the end, that will be thanks to something you did right, which is to listen and engage.

When your child feels accepted as they are, they will feel free to change and become even truer versions of themselves. If you’re lucky, you’ll get to be there to see them blossom and at least have a small part in the bloom.

Anyone else looking forward to seeing those cosplay wedding photos?

Also, for anyone thinking of tying the know, Curtis revealed she has “married three couples” as an officiant in the past, and joked that she is “available” for inquiries. Book her now!