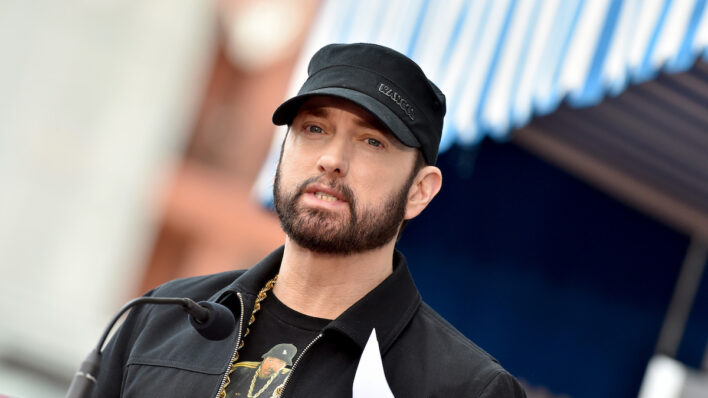 Eminem’s Mom: The Truth Behind the Rapper’s Relationship with Debbie Nelson Mathers

The rapper accused her of triggering his addiction and substance abuse and took every opportunity to denigrate her in his music. Yet, despite the hostility, mother and son were able to make amends and forgive each other.
By Shaoni Das    October 11, 2022

The rapper accused her of triggering his addiction and substance abuse and took every opportunity to denigrate her in his music. Yet, despite the hostility, mother and son were able to make amends and forgive each other.

There is no doubt Eminem is a complicated person. His 25-year career has been defined by feuds, violence and toxic male aggression. However, amid the chaos, the rapper has maintained the ability to lay bare his vulnerabilities and acknowledge his weaknesses. Nothing illustrates that complexity better than the fraught relationship between Eminem and his mom, Debbie Mathers (formerly Debbie Nelson).

Marshall Mathers (better known as Eminem) didn’t have the best upbringing. Being raised in poverty — his parents grappled with addiction and relationship troubles — scarred the young rapper, just as he was beginning to carve out his identity. As such, he harbored resentment for his mother and father, and swore he would break the pattern when it came to his own daughter.

Of course, reality doesn’t often pan out the way you hoped. The Detroit rapper had to stand up and address his failures head-on. Through this journey, he could rediscover his relationship with his mother, and the place she occupies in his life.

RELATED: Dave Bautista Realized Why He Hated Being Rich – Until He Did One Thing for His Mom

The mother-and-son duo faced destitution and eviction at every turn, and moved frequently, in search of financial stability. Debbie was in no position to shoulder the responsibilities of parenthood. However, Eminem’s mother worked hard to make ends meet, even if the outcomes weren’t always satisfactory.

Unfortunately, her childcare abilities weren’t up to her son’s liking. As is his modus operandi, Eminem badmouthed Debbie in the charged lyrics to “My Name Is,” the opening track of his 1999 album The Slim Shady LP. In the song, he claims his mother did “more dope than” he did: “I told her I’d grow up to be a famous rapper / Make a record about doin’ drugs and name it after her.”

Debbie Mathers Sued Eminem Over His ‘My Name Is’ Lyrics

Debbie Mathers Briggs (her current husband, John Briggs, is her fourth) was blindsided by the admission. Shortly after the release of “My Name Is,” she sued her son for $11 million, claiming defamation of character. Eminem’s team responded by saying his music only reflected the truth. His lawyer also said the lawsuit was a “result of a lifelong strained relationship between [Eminem] and mother,” and that it was pretty “painful” to be sued by your own mother.

The animosity between Eminem and his mother didn’t subside, however. In 2002, Eminem released “Cleanin’ Out My Closet,” in which he accused her of suffering from Münchausen syndrome by proxy, a disorder in which a caregiver makes up an illness or injury in a person under their care.

RELATED: Justin Bieber Ranks #2 in the World for Something That Will Shock His Haters

As if that weren’t enough, he made more references to her substance abuse in the song “My Mom”: “My mom loved Valium and lots of drugs /That’s why I am like I am ’cause I’m like her.” He also wrote how she added Valium in his food multiple times. and would threaten to throw him in the basement if he didn’t eat his meal.

It’s difficult to distinguish who’s telling the truth when the atmosphere is so incendiary. However, Debbie did try to provide a context in her 2008 memoir My Son Marshall, My Son Eminem.

“At first I went along with it for Marshall’s sake — if I made one mistake as a mother, it was giving in to my eldest son’s every whim,” she wrote, alluding to how she may have added Valium to his food. but only at his insistence. She also insisted that it was an uphill battle to care for her son, given her wretched circumstances. Just because she made some terrible decisions of her own doesn’t mean Eminem should have taken the liberty to defame her at every opportunity.

He never knew his father, and I did all I could to make up for it. I wasn’t happy when he made up a whole new life for himself – what mother wants to be known as a pill-popping alcoholic who lives on welfare?

Debbie Nelson on My Son Marshall, My Son Eminem.

With time, Eminem forgave his mother. There’s only so much room for hatred and anger, and when the years weigh down on you, you begin to realize how everyone goes through a hard time.

Eminem’s ‘Headlights’ Shifted the Focus to His Father

In his 2013 song “Headlights,” Eminem discussed forgiving his mother, questioning if he had taken his resentment “too far.” He also shed light on his father’s role — or lack thereof — in exacerbating tensions between himself and his mother. If he hadn’t abandoned the family at such a critical juncture, mother and son wouldn’t have had to endure so much hardship.

At the end of the day, the 50-year-old “loves” his mother, and says she’s “still beautiful” to him. She “did her best” to raise him and his younger half-brother, Nate, even though the “cross” she bore was the heaviest of all.

But regardless, I don’t hate you ’cause, Ma / You’re still beautiful to me, ’cause you’re my Ma […] All you did, all you said, you did your best to raise us both /Foster care, that cross you bear, few may be as heavy as yours.

Eminem opened Mom’s Spaghetti restaurant in Detroit in 2021. However, it’s not a sign that he’s mended fences with mother Debbie (by all accounts, their relationship remains strained). Instead, it’s a reference to his song “Lose Yourself,” from the soundtrack to his 2002 acting debut, 8 Mile. The menu includes vegan meatballs, and a spaghetti sandwich (Eminem’s favorite).

Eminem clung onto so much rage in the first 40 years of his life that he and his mother still remain a little “estranged.” It’s OK to feel a grudge, and there’s no reason why you shouldn’t call out people for their dangerous behavior.

However, as you grow older, consider whether the antagonism is worth your time. Our priorities shift, we become wiser, and we tend to forgive ourselves and each other for the past. The bitterness will only deter you in your journey, haunting you every step of the way till you’re ready to combust. Instead, free yourself. It feels good to look forward to the future and not have any regrets about the past. So if you have the opportunity to rid yourself of the bitterness, take it.