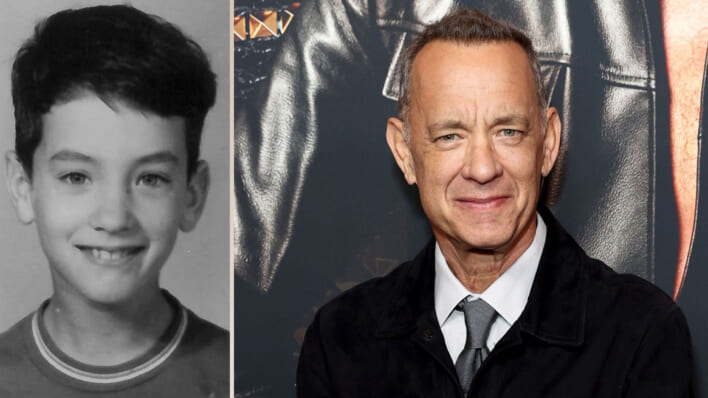 One of the world’s most prolific actors, Tom Hanks had a difficult childhood, but it taught him a life lesson in maintaining optimism above all else.
By Rhea Kumar    October 18, 2022

One of the world’s most prolific actors, Tom Hanks had a difficult childhood, but it taught him a life lesson in maintaining optimism above all else.

Tom Hanks is one of the world’s most successful leading actors and has led a prolific career in Hollywood as a screenwriter, producer and director. He is one of the few actors to win back-to-back Oscars for acting, one for his role in 1993’s Philadelphia, and in 1994 for his role in Forrest Gump. Yet, his career has no end in sight.

RELATED: Tom Hanks: Cultivate Your Faith, Not Your Fear

This summer he lit up the screen in Baz Luhrmann’s Elvis biopic as Colonel Tom Parker, and in Disney’s live-action Pinocchio remake as Gepetto.

But, his path to stardom is anything but conventional, and Tom had to learn early on in life that optimism is the greatest tool to have in dark times.

Hanks is consistently crowned as one of Hollywood’s nice guys, because of his down-to-earth and genial personality. We can all remember back in 2015 when Tom Hanks found a Fordham student’s ID in Central Park and sent out a mass tweet to find its owner. Talk about the definition of a good Samaritan.

RELATED: How to Break the Cycle of a Traumatic Childhood and Save Your Family

Then there was the time Hanks was filming Angels and Demons in Italy and witnessed a wedding procession. The bride was having difficulty getting through the crowd because the movie was being shot near the wedding chapel, so, ever the hero, Hanks stopped filming and decided to escort the bride so she could get married. Now that’s a superhero move.

Despite his great personality and overall happy-go-lucky demeanour, Tom’s life was anything but perfect, and the actor has been candid about the trials and tribulations he faced during his childhood.

Hanks’ good spirit is most likely a result of his childhood, where he had to make the most of his unfortunate situation. Hanks was born the third out of four children and his parents divorced in 1961 when he was just five years old. His baby brother lived with his mom, but Hanks and the rest of his siblings lived with his dad. Hanks says that his dad moved so often that by the time he was 10, he had lived in 10 different homes.

In 2017, Hanks released a book of short stories called Uncommon and in the collection, he detailed the less than ideal conditions that he and his siblings endured.

His father Amos worked late nights as a cook and wouldn’t return home until 11pm. Meanwhile, Hanks and his siblings would dwell in their dirty apartment. “If you scraped the amount of burnt tomato soup off the stove, it would have been like an archeological dig!” he recalls.

The Hollywood star says that despite his siblings saying that their childhood wasn’t that fun and that they were miserable, “In some ways it was very cool, because we laughed a lot.”

Loneliness and Falling Through the Cracks

But despite the fun and nomadic life that he lived, Hanks harbored feelings of loneliness and abandonment. In an interview with Graham Bensinger, he detailed his loneliness, saying, “Maybe there was a degree of loneliness because really no one — I kind of like fell through the cracks and didn’t really have adults per se that were taking care of me.”

The Splash actor often asked himself, ‘How do I find the vocabulary for what’s rattling around in my head?’, and when asked by BBC Radio 4’s Kirby Young what those feeling rattling in his head were, Hanks replied, “It was the vocabulary of loneliness.”

Tom Hanks doesn’t think that he inherited his optimistic and cheerful worldview from his parents. Instead, he says that he had to develop those skills on his own. In an interview in 2017, he said, “The few times I’ve been afraid of a new environment, I got over it. And once you learn that it might be bad for a while, then you’re OK.”

He also says that for one to be an optimist doesn’t mean that they’re naive, or that they aren’t aware of the harsh realities of the world- after all, he’s experienced his fair share of that. He says, “That’s just not the case. I weigh everything. But I can’t help it that I wake up in the morning and think: what good thing is going to come around?

And with this optimism, Hanks transformed his life. By the time he reached high school, he realized that acting could be a serious career path and performing allowed him to get out of the house. “I had more fun than I could possibly imagine,” he said in an interview.

Because of his loneliness experience in childhood, Tom Hanks was determined to start a family as soon as he could. At the age of 21, he and ex-wife Samantha Lewes wed, and soon enough he had a son and daughter. While times were tough as the young actor tried to make it in the business while parenting two young children, Hanks says that settling down early was a good thing.

He said, “Having a kid at 21 was the greatest thing that ever happened to me because I didn’t smoke pot…I didn’t go into drugs, I was not a party boy, I didn’t drink too much.”

The Making of a Hollywood Legend

Hanks’ dedication to his career and his family life paid off when he landed what many believe to be his big break in 1984’s mermaid rom-com, Splash. Afterward, producers were practically knocking at his door with comedy roles, and he even landed an Oscar nomination for his role in the 1988 hit Big.

But in the 1990s, Hanks was tired of playing goofy characters and decided that he wanted to try more dramatic roles. And this career shift, though risky, ended up paying off as the actor is only the second male lead to ever win two consecutive Oscars.

Since then, Tom Hanks has acted in close to 100 movies, and his overall box office gross is around eight billion dollars- it’s safe to say that he made the right career movie.

How Does Tom Hanks Deal With Hard Times?

Tom has admitted to seeking therapy during tough times, like in 1987 when he divorced his first wife, Samantha Lewes. But today, Tom has developed a set of coping techniques like Transcendental Meditation, to create a balanced and healthier life with Rita Wilson, his wife of over 25 years.

You could easily take one look at Tom Hanks and say, “this guy must have it so easy.” But, his path to stardom was certainly not easy, and it took a lot of perseverance for Tom Hanks to acquire positivity and optimism despite his bleak childhood.

Relationship Goals: How Tom Hanks and Rita Wilson Prove That Timing is Everything