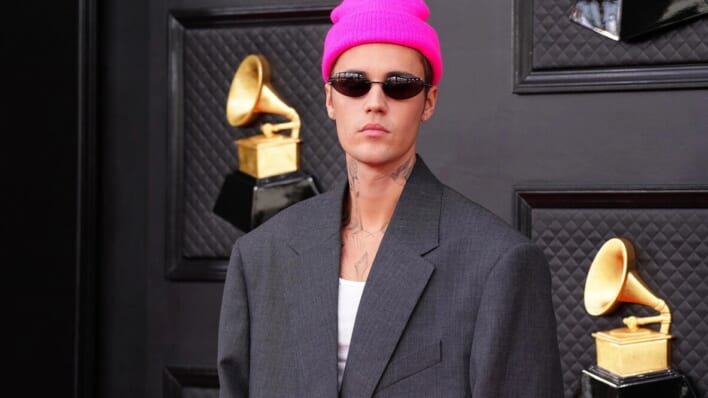 Justin Bieber may be one of the most popular celebrities out there. His long career has made him place second in the world for something that may surprise you.
By Bina Lee Deir    October 3, 2022

Justin Bieber may be one of the most popular celebrities out there. His long career has made him place second in the world for something that may surprise you.

Justin Bieber is a familiar name in the entertainment industry. It really doesn’t take much for paparazzi to zero in on things that he is doing every day, making it headline news.

Although being in the industry comes with a lot of negative press, there are also positive ones that will give people a different perspective on various stars. In Justin Bieber’s case, his uplifting headline coincides with reaching out to his fans, especially those with critical illnesses.

Justin Bieber is currently second in the world for granting the most wishes through the Make-A-Wish Foundation. While John Cena may hold the number one spot, Bieber is close behind. Bieber has been involved with Make-A-Wish for almost as long as he’s been active as a singer. His consistent reliability and loyalty as an artist with this organization is impressive and inspiring.

Justin Bieber said in an interview with Variety at the Young Hollywood Awards in 2014 that “Make-A-Wish has just been heavily on my heart since I was about 13.” His persistence and dedication to the organization has been incredibly heartwarming.

In 2015, Justin Bieber took the initiative to put on a private concert for 20 fans at a bowling alley in Los Angeles. He sang several songs and even took selfies with the fans, giving hugs and kisses on cheeks to them.

What made this whole event even more humbling for the megastar is that he never revealed that he did this concert. In fact, most of his appearances and Make-A-Wish events have not been made public or shared with news outlets.

As a figure who gets a lot of slack and negative press, it is often overlooked that at the end of the day, Bieber is a good guy with a genuine heart. He is someone who wants to use his star power to reach out to his fans whenever possible.

Not Even a Pandemic Could Stop Bieber

During the pandemic, Make-A-Wish took a big hit as a lot of celebrities were unable to fulfill their wishes on account of not being able to travel due to restrictions. Take it upon Justin Bieber to make sure that wishes continue to be granted.

Having normally met his fans in person, Justin Bieber took the initiative to continue granting wishes. Instead of a backstage meet and greet, he would have the fans call him via video conference. Although the interaction would seem to lack meaning, Justin Bieber made it even more personable by talking to the children much longer than expected. It required a lot of focus on the fan, which made it much more worthwhile despite the circumstances.

RELATED: Toddler Isolated From All Other Kids During the Pandemic – Makes an Unlikely Friend Across the Fence

This only further shows the grace and genuineness that Bieber shows his fans. During a time where many celebrities could not uphold their promises, Bieber found a way to make it happen. His dedication to the cause and need to give back to his fans knows no boundaries.

Justin Bieber has been very public about his struggles with mental health. He often shares words of advice and quotes on his social media accounts, trying to bring awareness and even some support with those who may be battling illnesses.

“A lot of people struggle with depression and people look at it like it’s a weakness.”

When Bieber embarked on his Justice World Tour, he donated $3,000,000 towards BetterHelp, a service that provides mental health care professionals to anyone in need. The money he donated would cover the cost of therapy for one month to anyone who registered. Everyone who worked on Bieber’s world tour would have access to free therapy for 18 months.

RELATED: What Caused Justin Bieber To Set Boundaries In His Life?

Additionally, just last year, it was revealed through ET that Bieber collaborated with Audacy to produce a live broadcast that would bring together other celebrities to talk about mental health. He saw the importance in openly talking about the issue, trying to normalize it and in turn, show people that they are not alone.

It is with initiatives like these that really show who Bieber is as a human being. He is a star and singer, but he takes great strides in trying to bring help to people in any way that he can. His genuine kindness and desire to help those who are struggling is very evident through his actions, and whether you like him or not, you have to admit that he’s got heart.