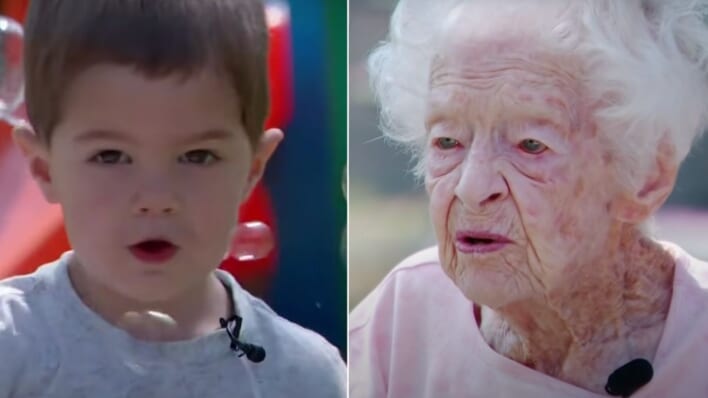 The pandemic was challenging for many reasons, especially during the earlier days when quarantine meant you couldn’t always see your loved ones. But it was also because of the pandemic that one special toddler met his first best friend.

In a Global Pandemic, an Unlikely Friendship Forms

In Minnesota, two-year-old Benjamin Olson knew his neighbor Mary O’Neill as the woman who waved at him through the window. Eventually, the 99-year-old began coming outside to say hello, and before anyone knew it, the pair were meeting up by the fence between their homes for regular hangouts.

“For more than a year, he didn’t see other kids. He didn’t interact with anyone except our family and Mary,” Benjamin’s mom, Sarah Olson, told Today Parents. “They ended up forming an incredibly strong bond.”

RELATED: Neighborhood Kids See a Boy Struggling to Ride a Bike – His Mom Catches Them Doing the Unbelievable

O’Neill had lost her husband 37 years ago and was living alone. So sitting on the steps and blowing bubbles with her neighbor, playing a game they created called “Cane Ball,” or chatting to him about their backyards brought her joy.

“Benjamin keeps me company,” she exaplained. “Sometimes, he’ll get up and grab a piece of sand or a rock and give it to me as a gift. He makes me feel good.”

Mary Missed the Company of Her Son

At one point, O’Neill even hauled over a box of old toy trucks that belonged to her late son and gifted them to the boy next door. “Mary carried this big laundry basket filled with heavy trucks up from her basement. I have no idea how she did it. But she carried out those trucks, no problem,” Sarah recalled.

She also told the publication that she knew how much O’Neill meant to her son, but she had no idea how much her son meant to O’Neill. So hearing how special Benjamin was to the neighbor made her tear up.

“Mary is fiercely independent. She doesn’t really show her cards,” Sarah explained. “So I got really emotional when I heard her say that she missed Benjamin on the days when it was too cold or rainy to go outside… Mary really is Benjamin’s best friend. She’s his first best friend.”

Celebrating the Century Club With Her Best Friend

O’Neill turned 100 in December 2021. However, her family decided to take advantage of the nicer weather the summer before, in August. They planned a party and, naturally, the Olsons were also invited.

“It is his buddy and he was very excited to go to her party,” Anna told Today in a follow-up interview. “A lot of her family has been hearing about Benjamin, so they were excited to meet him. [Their friendship] just added a really special layer to her party.”

Speaking of special layers, Sarah wanted to do something to show O’Neill just how much she meant to their family, too. So she began a campaign to get 100 birthday cards sent for O’Neill’s 100th birthday. She set up a P.O. box, and before she knew it, she had 300 birthday cards from 21 States — plus one from Germany.

RELATED: 8-Year-Old Boy Sneaks a Book He Wrote Into His Local Library – What the Library Did Next Created a Frenzy

As for O’Neill and Olson, their friendship only continues to grow. For her birthday, O’Neill received a bag of treats she shares with Benjamin whenever she can. For his part, Benjamin now calls his neighbor Mimi.

“Most of his friendship with Mary, he didn’t really say a lot of words,” Sarah said. “For him to come up with Mimi was really cute. Now she’s just Mimi and he asks for Mimi all day long.”

The Power of Friendship, the Magic of Life

The best part about this heartwarming story is that it just shows you how friendships can happen anywhere. You never know who you’re going to meet that could change your world — if you’re only open to the potential.

It’s a friendly reminder for us to open our minds and be receptive to people from all walks of life, no matter how old or young they are. Furthermore, this story also highlights the importance of offering your friendship to others. Some people are lonelier than they let on, but offering a friendly hello, sharing a coffee, or joining someone on an afternoon walk can sometimes fill their days more than you possibly know.