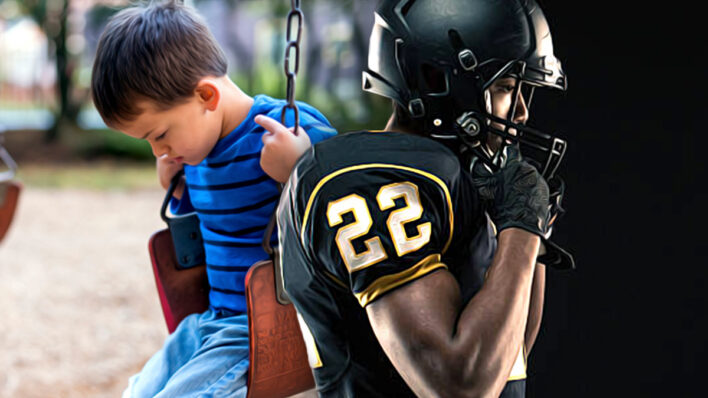 An Idaho high school football team completely made an autistic boy’s special day truly amazing after his class failed to show up.
By Amber Dowling    April 11, 2022

An Idaho high school football team completely made an autistic boy’s special day truly amazing after his class failed to show up.

Every kid deserves to feel special on their birthday, no matter what kind of adversity they’re facing in life. Luckily, after one little boy’s peers and parents failed to recognize that, a big-hearted football coach and his motivated high school team stepped in to score a touchdown.

Back in 2019, a soon-to-be nine-year-old boy named Christian Larsen, who has autism, was really excited to have a big birthday party with all his friends from school. He’d been asking his mom for one for a few years, but they’d always found an excuse to either keep it small or to only invite family. But with his ninth birthday coming up, Lindsay Larsen decided it was time to make her son’s wish come true.

RELATED: 30 Birthday Quotes To Celebrate Your Friends and Loved Ones

So she sent him to school with 25 invitations for his classmates, but didn’t hear back from their parents. At first, she wasn’t sure if he’d passed them out, but she later learned he was so excited to give them out that he interrupted class. Eventually, just one little girl responded and it broke Lindsay’s heart.

“I don’t blame them for that, I understand behaviors and things we’re not used to can make us uncomfortable and make us shut down,” Larsen later told KTVB7. “But when you get to know someone that thing that was strange, that made you uncomfortable, that can become just a quirk and the quirk can become something special as you get to know them.”

At the time, Larsen was so upset about the situation that she also posted about it to her friends on Facebook. She wrote that she understood, but that it was still really hard to watch — especially as a mother.

“At the end of the school year picnic, Christian was saying goodbye to his ‘friends’ and asked them to RSVP. I watched as he talked to six kids from his class,” she wrote. “He addressed them by name, paused, then talked. He has worked so hard to learn names this year, and I could tell he was proud as he talked to them,” she continued.

RELATED: Ryan Reynolds Comforts Fan After Girlfriend Breaks Up with Him on His Birthday

“He asked a couple for high fives. One girl responded to him and said, ‘OK,’ and smiled. The rest were boys. Three didn’t respond to him at all. One just said, ‘No.’ And another who was sitting at a picnic table next to us, first ignored him, and then when Christian didn’t take the hint to leave and asked again, said, ‘Maybe.’ The parents didn’t acknowledge Christian either.”

At first, Larsen hoped it was just the end-of-year chaos, but after watching the interactions at that picnic and doing some self-reflection, she began to feel like there was more to the situation. “The hardest thing, is I do understand,” she wrote. “It can be uncomfortable to try to be a friend with someone who has had outbursts and cried in class. It’s hard when maybe you tried at the start of the year, and he kept wandering off in the middle of the game.”

She then explained her own family’s philosophy on spreading kindness. “We have worked with Christian and all of our kids to accept and love everyone as they are,” she added. “People may do things that embarrass you, or that you’re not used to and that is okay. He has come a long way in learning that everyone is fighting different battles, and you never know why. You don’t need to know why. You just need to be kind.”

One of Larsen’s friends saw the message (which has since been shared dozens of times) and decided to reach out to the local high school football coach in Idaho to see if he could help. Nampa High School Football Coach Dan Holtry immediately texted his players to see if they’d be up for going to a kid’s party.

RELATED: Bullies Throw Boy’s Shoes In The Toilet At School – One Week Later, A Student Shows Up At His House

“The kids, before I could finish the text, it feels like they were like, ‘We’re in… Coach, we are in!’ They were like, ‘When do we do it, let’s go,’” he told KTVB7. “I was amazed how much they wanted to participate in this and take care of Christian.”

On the day of the party, the high schoolers made good on their promise and more. They showed up in their jerseys, chanting Christian’s name. They even brought him gifts, played with the other kids, and stayed for cake.

“This is probably the best birthday ever, I have lots of best days in my life, and this might be one of them.”

As for Christian, he was so excited by the show he even pretended to faint.

“I literally pretended to pass out when I saw them, it was really cool. I was wowed! I can’t explain it! Wowed!” the boy added to the outlet. “This is probably the best birthday ever, I have lots of best days in my life, and this might be one of them.”

“He just looked so happy to see us! We were all so excited to be there,” one of the players, Donovan Estrada, said. “He just wanted to play football with us, showing the presents that he got, he wanted us to stay for cake and stuff like that.”

At the end of the day, Holtry is teaching his kids more than football—he’s also teaching them life lessons. In the end, their kindness turned a day around for a very special kid, but it also made a world of difference to his entire family.

RELATED:Student Asks Bullied Classmate To Meet Him In The School Gym – What Happens Next Brings Him To Tears

“One of the biggest pieces of autism is the social piece. They can teach him the back and forth of playing. They can help him build relationships not only with them but with kids his own age,” Larsen said. “One thing I’d like to say is for parents to talk to their kids because everyone needs a friend. Talk to your kids about differences that other kids might have.”

We Need to Talk to Our Kids about Differences, Diversity and Acceptance

A major takeaway from this story is the importance of talking to your kids about acceptance and kindness and helping them to understand that everyone is going through something — even if you can’t see it. As Larsen herself said in that original Facebook post, all you can do is be kind.

Kids aside, it’s a lesson we could probably all learn from. How often do we busy ourselves in our own daily grind and forget there are others going through hard things as well? Christian, his mom, a coach, and this entire high school football team are proof that sometimes just showing up or getting to know someone for who they really are is what truly matters in life.

As Christian proves, it can make a world of difference to someone else in ways we maybe never even considered.