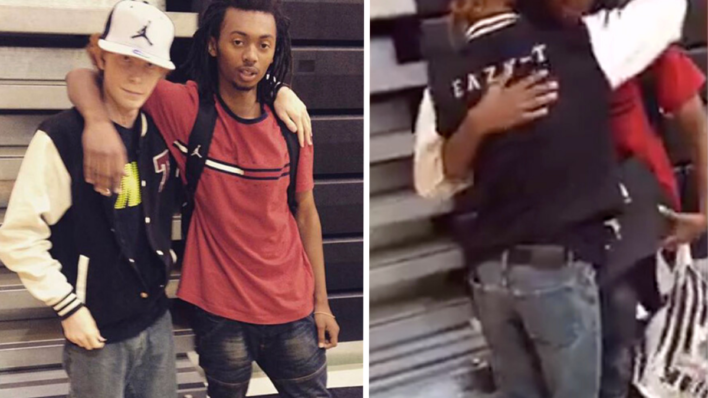 One South Carolina student exhibited an extreme act of compassion for a bullied classmate.
By Rajana Rajeendran    January 16, 2022

One South Carolina student exhibited an extreme act of compassion for a bullied classmate.

Bullying is an extremely stressful situation for anyone; as a child, it negatively effects their social, physical, emotional, and mental health. It is found to be linked to depression, anxiety, and low self esteem.

When a South Carolina student, Tae Moore saw that his classmate, Taylor Bates was being bullied for the way he looked and dressed, he decided to treat him with kindness. He went out of his way to buy Bates a new pair of Jordans. This incident was captured in a video by Tae’s friends and was posted online, after which it immediately went viral.

An act of kindness

When Tae saw his classmate being bullied, he reached out to him and asked for his shoe size and told him to meet him the next day at the school gym. Confused and nervous, Taylor went to him and saw that a small crowd had gathered.

Upon seeing him arrive, Tae walked towards Taylor and showed him the new Retro 1 Jordans that he had bought for him. Taylor was shocked when Tae reached down to tie the laces of his new shoes. Tae assured him and told Taylor to let him know whenever someone bullied him. They shared a hug and Tae was left speechless and teary.

Later that day, Tae posted on his social media about the incident to set an example for his peers.

This kid go to our school named Eazy-E. He likes to rap and etc., he said he wants to be a rapper, just trying to chase his dream but kids at school like to bully him and pick on him and talk about the way he dresses and looks, so I went and bought him some Jordan’s.

Taylor responded to the post and thanked him for his kindness.

“He said, ‘I heard people have been bullying you, so I wanted to get you these to make you feel better, and when he said that I hugged him and I almost cried, and I cannot thank him enough,” Taylor commented.

Usually, people who are bullied feel ashamed to speak up about it to their parents or school authorities as they often feel like a burden to others. The scars of bullying remains even when the bully isn’t physically present.

In such times, support and kindness shown from fellow classmates can help them speak up for themselves.  Tae’s compassion not only warmed Taylor’s heart, but also made him feel like he has someone to rely on while fighting his battles.

Rajana Rajeendran is an author and content writer. Apart from improving herself as an artist, she expresses herself through storytelling. She focuses on women's literature with themes of resilience and optimism. She believes in sharing stories of triumph over trials that will help her readers stay positive in all difficulties. She is currently pursuing an Honors in Psychology and English Literature.