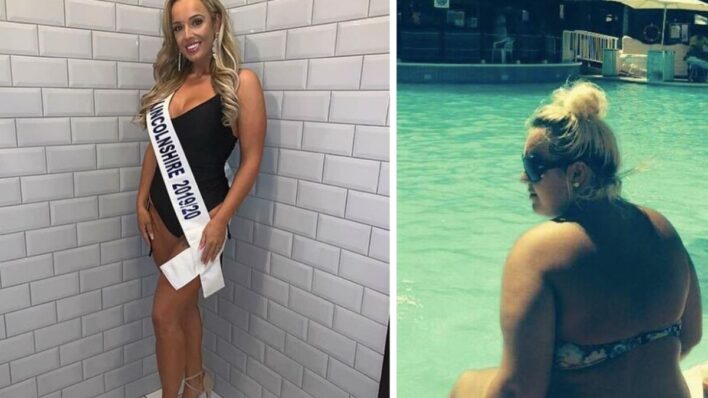 One woman went from being obese to pursuing her dreams of becoming a beauty queen — and she has a
By Bryan Liquor    April 6, 2021

One woman went from being obese to pursuing her dreams of becoming a beauty queen — and she has a shallow ex to thank for it all.

Several years ago, life was a drag for Jen Atkin of Grimbsy, North East Lincolnshire.

A self-confessed “couch potato,” Atkin tells The Sun that she would spend most of the time with her fiancé, sluggish and overeating.

“At weekends, we’d turn into virtual recluses sitting on the sofa in our pajamas eating takeaways.”

However, as her weight ballooned to 240 pounds, her fiancé shocked her by ending the relationship.

To cope with the pain, Atkin increasingly turned to her fridge.

From couch to crown

Then, one day, Atkin decided to end her pity-party and get to work.

She started walking regularly, going to the gym and being vigilant about what she ate.

As the pounds dropped, her confidence soared. Atkin quickly gained momentum and over two years, she shed 112 pounds – half of her body weight!

Eventually, she built up the courage and charisma to enter the Miss Great Britain competition, the UK’s longest-running pageant.

The event consists of several rounds including fashion wear, evening wear, and swimsuit and culminates in a panel interview.

After finishing the contest as a runner-up, Atkin put her pageant pursuits aside to focus on herself until her name was put forward again.

She ended up winning Britain’s biggest beauty crown over 59 other contestants in the national final in Leicester.

For Atkin, the victory meant far more than a crown.

“Winning Miss Great Britain marks the end of a long and difficult, but also amazing, journey”

There’s beauty in the struggle

Since winning the pageant, Atkin has only picked up the pace.

She launched a country singing career, with her debut single hitting No. 2 in the ReverbNation charts.

She’s also using her status to push for “clearer and easier” labeling on food to warn people if an item is unhealthy, which she says will “make it easier for everyone.”

Atkins now reflects on her difficult journey with gratitude.

While Atkin had painful experiences, they ultimately revealed what she’s truly capable of and her true worth. She used them to take her life in an amazing direction that even she didn’t know was possible.

Today, you can bet her shallow ex is probably sore from kicking himself.

The next time you feel like giving up, remember that your best is yet to come.