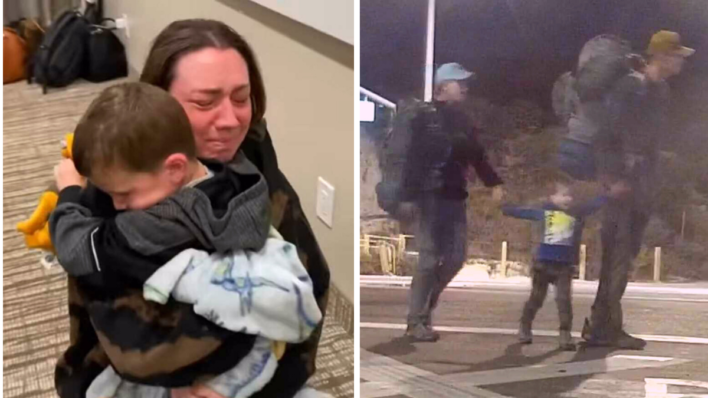 A Tennessee mom’s worst nightmare is over thanks to an eagle-eyed good Samaritan.
By Sophie Tolias    December 13, 2021

A Tennessee mom’s worst nightmare is over thanks to an eagle-eyed good Samaritan.

The morning after Amanda Leigh Ennis dropped her 3-year-old son, Noah Clare, off at his dad’s house for the weekend she received a concerning call from a family member and feared she’d never see her boy again.

The relative told Amanda that her ex, Jacob Clare, had disappeared with Noah and his niece, 16-year-old Amber. Amber had left behind a note stating they were “going on an adventure,” but the family had no idea where they were headed.

The police didn’t respond immediately because it was Jake’s time with Noah. It wasn’t until Sunday at 6 p.m., when Jake was supposed to bring back Noah and he didn’t, that the police got involved. Noah was officially a missing person, and an Amber Alert was issued.

For 13 days the families were worried sick as authorities searched far and wide with no trace of Jake and the children. Then a total stranger hundreds of miles away spotted them near a state park.

Eagle-eyed mom is a hero

Julia Bonin saw a man and two children walking near Doheny State Park in Orange County, California as she was dropping her son off at school. The eagle-eyed mom thought the boy looked like the missing child she had seen all over social media, so she turned around, went back to where she spotted them, and called 911.

My heart was pounding. I had a strong feeling that it was, but I was questioning my instincts. I was starting to shake.

Julia Bonin to Inside Edition

Sure enough her mom instinct was spot on.

Jake was taken into custody and is charged with kidnapping and several charges surrounding the sexual abuse of a minor. As soon as Amanda heard they were found, she jumped on a plane and flew to California where she reunited with her son and tearfully thanked Julia for being a hero and bringing her baby back.

It’s been a complete and total nightmare. There were moments where I thought I was never going to get him back.

Amanda Ennis to Inside Edition

Amanda turned to Facebook to thank everyone involved in bringing back her son.

“That Angel. She is our hero,” Amanda wrote in a post. “God led her to Noah and she is the most beautiful, sweet, and loving person who will forever be a part of our lives. She was able to find Noah because of all of YOU! Social media is amazing.”

Listen to that little voice

This story reminds us how important it is to trust our instinct and to speak up if something seems suspicious. Julia wasn’t positive that the boy she saw was Noah, but she listened to that little voice that told her it was, and her actions safely brought him back to his mother.

Trust your instincts
“There’s a moment where you have to choose whether to be silent or to stand up.” – Malala Yousafzai
Tags
Share
← Prev Post Next Post →