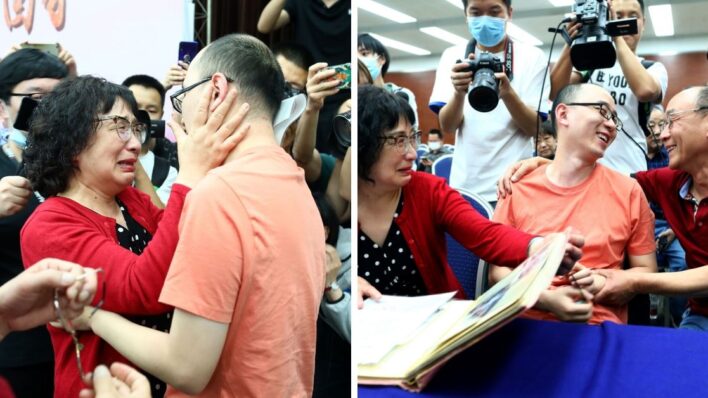 Parents Finally Reunited With Their Kidnapped Son After 32 Years

Li Jingzhi and Mao Zhenjing’s son was kidnapped more than 30 years ago but all this time, they never stopped looking. And their efforts were not in vain.
By Aly Walansky    May 19, 2020

Li Jingzhi and Mao Zhenjing’s son was kidnapped more than 30 years ago but all this time, they never stopped looking. And their efforts were not in vain.

For Li Jingzhi and Mao Zhenjing, more than 30 years ago, the unthinkable happened. Their son, Mao Yin was snatched from a hotel in 1988, 32 years ago, when his father turned away for a moment to get him some water.

They spent the better of the last three decades searching for their son.

They never gave up

His parents were devastated but never gave up. Over time, his mother distributed more than 100,000 flyers as part of her efforts to find Mao, who was just two at the time of his disappearance.

Looking for Mao was a full time job, so she quit her employment to dedicate herself to it. Over the years, she followed over 300 leads, each without much success.

She even went so far as to make tearful appeals on television, appearing on shows like The X Factor begging for her baby’s safe return. Li hoped that her son would be watching and recognize her.

The parents started by searching their region of Xian, and eventually widened their search to the national, and then international levels.

As the years passed, their quest was becoming more and more hopeless…until something wonderful happened. On Mother’s Day in 2020, his mother Li was given the happy news.

“This is the best gift I have ever got on Mother’s Day”, according to the CCTV report.

The family is now reunited, thanks to an incredible police investigation

Finally, last month, there was a breakthrough. Police learned about a man from Sichuan Province in South-West China – around 620 miles from Xian – who had adopted a baby years earlier.

Turned out that baby was Mao Yin – now known as Gu Ningning. They used facial recognition technology to analyze old pictures of Mao as a boy and confirmed his identity through a DNA test.

He was sold to a childless family

Police said the baby boy had been sold to a childless couple for 6,000 yuan. Child abduction and trafficking has been common for decades across the world, but often with no happy ending. He was given another name–Gu Ningning. Now 34, he finally reclaimed his real name, Mao Yin. He now runs a home decoration business.

I don’t want to be separated from him any more.

Mao replied that he would come and live with his biological parents soon. Mrs Li told the conference: “I would like to thank the tens of thousands of people who helped us.”

Li helped others while searching for her son

In 2007, she joined a volunteer group called Baby Come Back Home, which is an organization that works to find missing children. Mrs Li helped reunite 29 children with their families, but sadly her own son remained still missing.

However, Li’s incredible resilience–and her willingness to help others through her own pain–is nothing short of admirable. She never gave up and all her hard work was not in vain.